While the Russian war of aggression is raging in Ukraine and countless people are fleeing, sheikh clubs are outdoing each other with degenerate transfer fees and salaries. 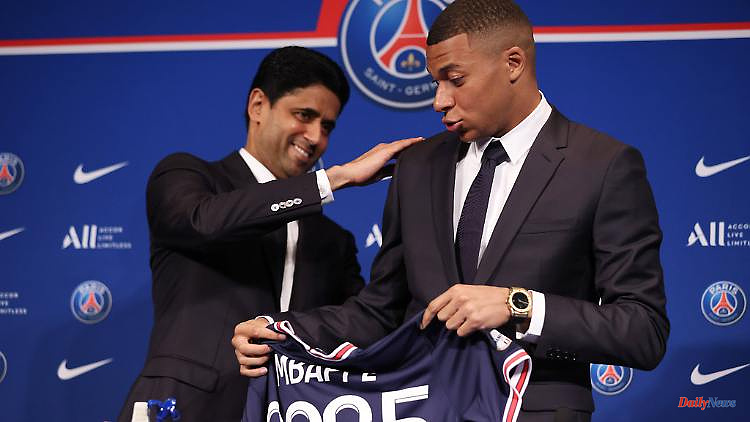 While the Russian war of aggression is raging in Ukraine and countless people are fleeing, sheikh clubs are outdoing each other with degenerate transfer fees and salaries. How is one to understand this greed for money and power? The Champions League final is also in focus.

"I don't count money in my account. I don't care." Kylian Mbappé speaks these sentences in an interview with the British newspaper "The Telegraph" after his contract extension at Paris Saint-Germain. The new working paper is intended to provide the French world champion with an annual salary of 50 to 60 million euros, and he is said to receive a signing bonus of an incredible 300 million euros. Not counting bonuses for goals, the Ballon d'Or or winning the Champions League, of course.

Mbappé and the football world are sure for a long time: The exceptional striker is moving to Real Madrid. But all of a sudden, according to his own statements in the interview, the Frenchman becomes aware of his roots, finds "a sentimental side" in himself and believes his chapter in Paris is not yet closed. So the decision for PSG has absolutely nothing to do with the millions. A rogue who assumes the 23-year-old calculation. Anyone who accuses him of using real poker to get even more money from PSG and is already planning the next move. After all, the new contract only dates until 2025.

This is not supposed to be a cheap attack on Kylian Mbappé, who is just cleverly exploiting an ailing system and selling his radiance to the highest bidder. Who wouldn't want to make the best of their situation? Serge Gnabry is also said to be hesitant about an offer of 19 million euros in annual salary from FC Bayern. Honest and value-based, however, is not the whole thing. It's more like depravity.

"I am convinced that I can develop here at a club that offers me everything I need to play at the highest level," says Mbappé. "I'm also happy to continue playing in France, the country where I was born, grew up and made my name." Well, throughout the past year, that "sentimental side" didn't seem particularly important to him. And it is said that the salary and bonus money at Real were just too measly. "The money wasn't the most important thing for Kylian, it was the sport," asserted PSG club boss Nasser Al-Khelaifi about his protégé, who now remains in a mediocre athletic league.

Erling Haaland, who is taking a step forward and moving from the Bundesliga from Borussia Dortmund to the strongest league in the world, does it differently, in the Premier League with champions Manchester City. His 350 million euro mega deal should make him the top earner in England. The Norwegian is said to get 40 million euros a year, father Alf-Inge received 30 million euros and the agency of the late advisor Mino Raiola collected 50 million euros for the negotiations. Even Liverpool FC, which is one of the 0.1 percent of the super-rich in world football, had to admit that a Haaland transfer could not be managed

Of course, salaries and transfers in the millions are nothing new in the thoroughly commercialized football business. But once again the clubs go one step further on the former money records. Mbappé and Haaland are not only the most sought-after footballers in the world - their new contracts are also a new level of commerce. An extent that slowly but surely only sheikh and oil clubs (Qatar and PSG, United Arab Emirates and Man City) can handle. An extent that is becoming more and more perverse. Especially in today's times.

Because with all the record transfer sums of the past, which were rightly viewed critically, there was no war raging in Europe. Wasn't death raging through the streets of Bucha and the houses of Mariupol. Had not previously raged a pandemic for more than two years. Of course, this is very simple and striking, but it must still be remembered: children, women and men are dying every day in Ukraine, fighting for survival and their homeland, are perhaps traumatized forever, while here and there such hefty sums are being knocked out, that no one can understand or grasp them anymore.

Once again, football fans are shown that their passion is no longer a national sport. That football between millions of greed, NFTs and sports washing by unjust states has lost its social relevance. Values ​​such as solidarity, sincerity, sportsmanship or human rights degenerate into empty slogans. Money, power and depravity rule. Although (almost) all observers are aware of this, it still has to be emphasized again and again, because the powerful in football skillfully conceal the loss of values.

Rather, countries with serious human rights violations, the misconduct of the World Cup hosts Qatar and the United Arab Emirates are well known, are able to hide their offenses and wash them clean with sport. "We are writing world football history," said PSG boss Al-Khelaifi. For Qatar's state-owned company, which runs PSG, Mbappé's contract extension is nothing more than cheap advertising to put the country in a positive light.

And at the same time, fans and observers are trying to somehow understand what these absurd soccer millions mean while a historic change of times is taking place. While the Kremlin wants to raze Ukraine to the ground and the focus in Europe on democratic and humanistic values ​​is more important than it has been since World War II.

In the evening, neither Paris nor City reach for the handle pot, but Real Madrid and Liverpool FC. But the final of the UEFA Champions League also finds its place in the spiral of falling values. The final was originally supposed to take place in St. Petersburg. Despite Russia's annexation of Crimea, despite various human rights violations in the country, despite fighting in the Donbass since 2014, despite threats to invade Ukraine. None of this mattered to UEFA, and Gazprom was also its sponsor for many years. It was only after Moscow's war of aggression began at the end of February that she decided to move the final to Paris.

"We're also playing this final for the people of Ukraine," said Liverpool coach Jürgen Klopp in Paris on the matter. "The fact that this game is taking place here and not in St. Petersburg is exactly the right message that Russia should receive. Life goes on, even if you try to destroy it."

Such clear statements cannot be heard from Real Madrid President Florentino Pérez, who is sitting in the stands in the evening. He fits well into this story about money, power and depravity. The 75-year-old is still convinced of the Super League, which would be something like the emblematic league of the Mbappé and Haaland sums. It must mean something when PSG boss Al-Khelaifi of all people, after meeting Pérez in March during the round of 16 in the premier class between Madrid and Paris, asked the BBC: "People are dying in Ukraine and have no place to sleep, and we fight for the Super League?"

The French and the Norwegian, Kylian Mbappé and Erling Haaland, they will both shape football and probably some Champions League finals in the future. The new, perverse extent of commercialized football is already evident in the millions heaped on it. While elsewhere in Europe, since the Russian invasion of Ukraine, more than eight million people have had to flee their homes and millions more fear for their lives.

All of this must not be forgotten when others than Mbappé and Haaland are fighting for the European football crown in Paris in the evening. Understanding all of this is not easy. 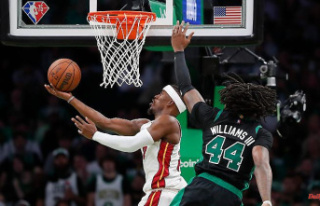 It comes to the do-or-die game: Celtics marvel at...