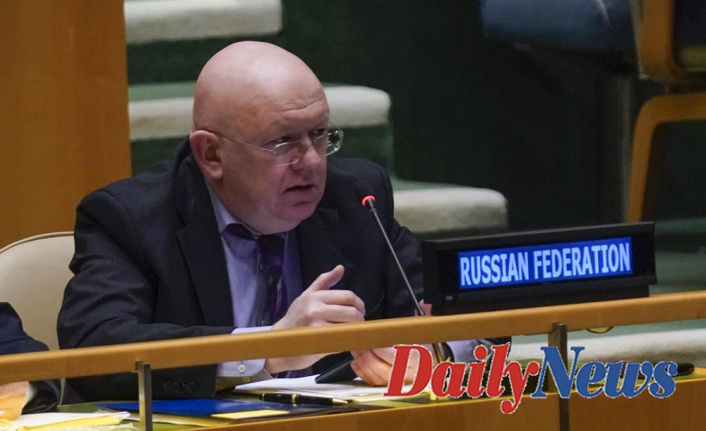 It also urged an immediate cease-fire to protect millions of civilians, their homes, schools, and hospitals that are vital for their survival.

As the vote result was announced, there was loud applause from the assembly chamber. 140-5 was the majority. Russia was opposed by only Belarus, Syria and North Korea. Eritrea was the only one to join them. There were 38 abstentions including Russian ally China.

The vote was nearly identical to the March 2 resolution that the assembly adopted, requesting an immediate cease-fire by Russia and the withdrawal of all its troops. It also demanded protection for civilians and infrastructure essential for their survival. The vote was 141-5, with 35 abstentions.

Following Wednesday's crushing defeat of a Russian resolution by the Security Council, the General Assembly acted. This would have recognized Ukraine's increasing humanitarian needs but not Russia's invasion of Ukraine that left millions in dire need of food, shelter and water.

Russia required at least nine votes of "yes" in the Security Council of 15 members and no veto from any of the other four permanent members, the U.S.A, Britain, France, or China, to be adopted. Russia was supported only by China. The 13 other members of the council abstained.

Moscow's inability to secure widespread support for its military offensive against Ukraine, which was celebrated Thursday as its one-month anniversary, is evident in the votes cast in the General Assembly and Security Council.

Barbara Woodward, Britain's U.N. Ambassador, told reporters Wednesday that Russia had "consistently misplayed her hand here, as well as seriously underestimated both the consequences of its actions and the international perception thereof."

A South African rival resolution was also presented to the assembly, but it didn't mention Russia. It was very similar to the Russian resolution that the Security Council rejected.

After the approval of the Ukraine-backed resolution, the assembly decided not to act on this resolution.

After Wednesday's Security Council vote was over, Vassily Nebenzia, the Russian Ambassador, and U.S. Ambassador to Russia were present. Ambassador Linda Thomas Greenfield debated Russia's offensive, and its decision not to draft a humanitarian resolution.

Nebenzia stated to the council that Russia's resolution was not "politized" like other humanitarian resolutions.

Thomas-Greenfield replied that Russia was "attempting use this council as cover for its brutal acts."

She stated that Russia does not care about humanitarian situations in the region. They would cease fighting if they cared. Russia is the aggressor. Russia is the attacker. Russia is the invader. They want us to pass resolutions that do not recognize their guilt.

China's Wednesday vote was the first time that it supported a Russian draft regarding Ukraine since the February 24 invasion. It did not vote for the March 2 General Assembly resolution calling for an immediate cessation in hostilities and withdrawal all Russian forces from its smaller neighbour.

Zhang Jun, the Chinese Ambassador to Ukraine, stated that China supported the resolution to emphasize its support for Ukraine's humanitarian situation and to ensure the safety of civilians.

Russia presented its resolution on March 15th. On March 15, Russia introduced its resolution. France and Mexico had already decided to move their humanitarian resolution, which blamed the Russian invasion for the humanitarian crises, from the Security Council where it was subject to a Russian veto to the 193-member General Assembly, where there are no vetoes.

General Assembly resolutions, unlike Security Council resolutions and resolutions that are legally binding, have the ability to reflect international opinion.

The assembly heard speeches throughout Wednesday. They began with Sergiy Kyslytsy (Ukrainian Ambassador), who called on all countries to support the resolution regarding the humanitarian consequences of Russia’s military attack. This would be a powerful message to help those caught up in the conflict and end Moscow's military actions, he said.

Nebenzia stated to the assembly that it was considering the resolution from Ukraine and engaging in "another anti-Russian political show, this time set in an allegedly humanitarian context."

He said that the adoption of the draft would make it more difficult to resolve the Ukrainian situation. It will encourage the Ukrainian negotiators not to address the root causes of Russia’s military action and allow them to keep their current unrealistic position.

Thomas-Greenfield harshly criticised Russia in her assembly speech. She stated, "In one Month, Russia caused humanitarian catastrophes that were the fastest growing in the world."

The U.N. estimates that 10 million Ukrainians have fled their homes, which is a quarter of the population.

Cho Hyun, South Korean Ambassador, compared the suffering of Ukrainian children to that experienced by Korean kids during the Korean War. This organization has the most immediate and collective responsibility to end this dreadful replication of the anguishes of children in the 20th Century.

Ferit Hoxha, the Albanian Ambassador to the United Nations, urged nations to not forget Russian President Vladimir Putin's responsibility. "This is a war between one man in his own isolation and who, through his reckless actions has managed to create in a matter of weeks the greatest ever isolation and world isolation of his country."

Russia is supported by some other countries, such as the Syrian Ambassador Bassam Sabbagh who stated that the assembly was once again "seeing an exploitation of human right issues in order to create state of polarization, politicization, and used to serve the political interest of some."

Russian authorities insist they didn't start the war, and have falsely and repeatedly decried reports of Russian military setbacks and civilian deaths in Ukraine. Officials and state media insist that Russian troops only target military facilities. 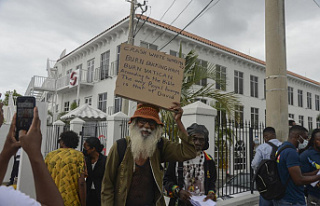 Protesters in Jamaica protest against royals'...