A week after the outbreak of the Afghan crisis, the president of the Government, Pedro Sánchez, has appeared this Saturday to take stock of the Evacuation proce A balance in which Sánchez has expressed the concern of Spain "since the first second" and whose "rapid reaction" has been applauded by the dome of the European Union, which has defined the First Attention Hub in which the Base of Torrejón as a symbol of "dignity" and "European values".

Spain has been "pending" and "above" this crisis since its outbreak, has expressed the president of the Government, because Afghanistan "is not an alien" for Spain. With the coordination of this Space of First Attention to Afghan Collaborators and Refugees "we are vindicating the best values of the European Union," said Sánchez, who are "Unity and Solidarity".

Thus, the president has announced the arrival this Saturday of two more flights with which he is planned to evacuate dozens of Afghans, but also Americans, according to advance. Despite this, the Department of State of the United States has obviated in a statement to mention Spain as a fundamental "partner" in the evacuation plan of Kabul Americans.

The US Plan has allowed the departure of 13,000 people from Afghan capital. In the thank you missive, the United States appoints a score of countries among which Spain does not appear.

A "State Subject" with "International Responsibility" that has been praised by Von Der Leyen, who has highlighted that Spain is "an example of what is the soul of Europe" and has shown a "valuable empathy" against the "blow Very hard "for the international community that has meant the" tragedy "lived in Afghanistan in recent days.

The Spanish mission in Afghanistan "has not been in Balde," said the president, who has highlighted the "sowing" that Spain has made for two decades in the territory, helping in the construction of roads, hospitals or in the schooling of children. and girls. "We hope that in a future germinate in greater prosperity, security and freed for the Afghan people," he said.

In the same way, Sánchez has reminded and claimed the memory of fallen soldiers in Afghanistan during the 20 years of stay in the country. A few weeks ago the government received precisely in Torrejón to the last troops that remained there.

A space, the Air Base of Torrejón, conditioned by the Emergency Military Unit (UME) for the extraordinary situation that is the evacuation of Kabul's countertime. According to the president, the deployment in the base has a capacity to house 800 people simultaneously, and the average stay is usually between one and two days, since some of the Afghans who have arrived in Spain since Thursday have already been redistributed at other European points, such as Denmark or the Baltic countries.

During the morning of this Saturday it has been known that another Spanish airplane has managed to land in Dubai after evacuating 110 people from Kabul. The aircraft, an A-400m, is the third flight of these features chartered by Spain. So are 273 evacuees from Spain .

The President's words arrive late, as he has criticized the opposition throughout the week, which he denounced as Sánchez followed on vacation in Lanzarote while other important European leaders appeared before the media or their respective parliaments.

In this sense, the strategy of the Moncloa has been betting on a low profile in terms of communication strategy. The president of the Government, through messages in the social networks, appeared 72 hours after the explosion of the crisis in an image in which, through a video call with several ministers, he coordinated the mission.

1 An okupa calls the police to open the door of a tapacious... 2 Pedro Sánchez aspires to have a relationship with... 3 Jakobsen doubles double while the wound (soul) of... 4 The European Union flatters Sánchez: Spain is an... 5 Russia accuses Spain of Russophobia for denying a... 6 Judge: California's ride-hailing law violates... 7 The COVID silences mariachi Mass and it returns to... 8 Don't give up: Afghan relatives in the UK reach... 9 Memphis goes out to the rescue of Barcelona in San... 10 Africa, uphill for rich, reset for the poor 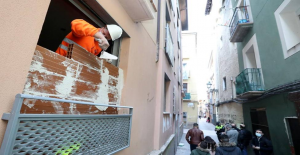 An okupa calls the police to open the door of a tapacious...