The Techno Parade to be cancelled because of the sars coronavirus

Showcase of electronic music for the past 22 years, the Techno Paris that brings together tens of thousands of participants in September in the streets of Paris 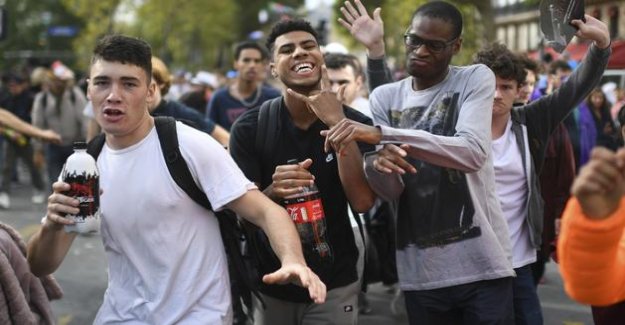 Showcase of electronic music for the past 22 years, the Techno Paris that brings together tens of thousands of participants in September in the streets of Paris, will not take place, due to estrangement, announced Friday, AFP, the organizers who make appointments to 2021. Created and organized by Technopol, the association for the defence and recognition of the electro scene, the first Techno Parade was founded in 1998 on the model of the Love Parade in Berlin. A single edition had been cancelled in 2001, after the attacks on the Word Trade Center in New York.

read also : The next Techno Parade dedicated to the memory of Steve

On a route of several kilometers, the charivari music consists of a score of tanks and their sound systems, to the rhythm of the various currents of techno such as house, trance and drum'n'bass, had met last year some 200,000 people. "We are presenting in 2021, the Techno Parade. There was hope in April to maintain the publishing 2020, but the gauge of the large gatherings remains unknown for September. In addition, the actors of the electro scene and the partners bear the brunt of the economic consequences of the health crisis. The context was not favourable for ride of the chariots", explained to AFP Tommy Vaudecrane, president of Technopol.

"Until 31 August, only the outdoor events of less than 5000 persons are allowed under strict conditions. The protests demands on the public way, such as the Techno Parade, are limited to less than ten people. Understandable, these sanitary measures are weakening, however greatly the ecosystem of culture and events, and compromises a summer season time normal rewarding for the public and profitable for the artists and technicians of the show," stresses Technopol in a press release.

"so It is with a heavy heart that Technopol is forced to cancel this time of great celebration. The Techno Parade is postponed to 2021, when we will be able to celebrate in a more secure framework for the health of all," says the association hopes to be able to organize an event electro free fashion show in Paris by the end of the year. To support Djs, Technopol has launched in early June, United We Stream, great disco virtual streamed live on Arte Concert and social networks from Thursday to Saturday from 19h to midnight, and Sunday afternoon live of the main clubs in paris. Broadcast for free, these DJ Sets will be accompanied by a call for donations in favor of the clubs and artists that do not have access to government subsidies.

Measure that fits very well within the framework of the fight against pollution. Thank you

All parades should be banned for life. Especially those in which some scrolls with 4 legs on a leash. Find our dignity and our values.

It was necessary to rename the musicblack-lives-matter of parade, and it was won, under the blow of emotion that would have been allowed! ;-)
I understand that this is not allowed for reason of health, but we recognize that there are two weights, two measures.

1 Basketball game Union: Smart guys with good ideas 2 Way for Bayern?: Sané to a new adventure 3 Of Freiburg string to the FC Bayern: I am not ashamed 4 Criticism of Large appointment: As President, not... 5 Vans Old Skool: A Sneaker for all 6 Letter from Istanbul: handcuffs for the press 7 Italy: Coronavirus in sewage since December undetectable 8 Economic stimulus package in the Bundestag: Black... 9 After a successful merger: Deutsche Telekom CEO: We... 10 WSF mandates: to suck honey out of the Corona-Fund