This camera size camera takes pictures like a mobile

During the cold war, the size of the cameras was important, the smaller better, to be able to make photographs without being seen. It is normal to link this t 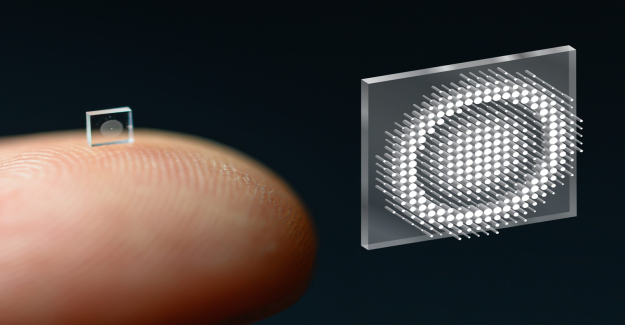 During the cold war, the size of the cameras was important, the smaller better, to be able to make photographs without being seen. It is normal to link this type of minilent to espionage, although at present its purpose is different and much more useful for humanity.

At a time when everything is sought to be nano, researchers at Princeton University and Washington University have managed to create a nanocamera of the size of a salt grain, capable of producing clear and color images, similar to those achieved. With conventional cameras, whose size exceeds this lens to 500,000 times. The finding, published in 'Nature', could revolutionize the health sector, allowing interventions more accurately and less invasive.

While traditional cameras use curved glass or plastic lenses to capture light, this new optical system is based on the Metasuperficie, a technology that can be produced very similar to that of a microchip. This half-millimeter lens wide, is composed of 1.6 million cylindrical tubes, each with a size similar to that of the human immunodeficiency virus.

Each of these cylinders functions as an optical antenna thanks to its unique geometry, since small design variations are needed in each of them to correctly receive the light. Afterwards, thanks to algorithms based on automatic learning, all the light points captured are combined to form a high quality image that also encompasses a broader field of vision than any mini-camera.

The key to the operation of this lens is the combination of a novel and efficient optical surface, with processing algorithms capable of forming color and high definition images, that is, it is capable of interpreting and forming images thanks to neuronal processing. The device is able to function with natural light, something that were not capable of metasuperficie chambers so far, which required laser light in a laboratory.

For researchers, the most difficult thing to achieve was to design the small microstructures that are part of the lens so that they could capture color images and with a broad field of vision. For this, the researchers created a simulator to automate the tests of the different configurations of the nanoantenas. Some evidence that would have been impossible for them to be performed by human as the amount of antennas and the complexity of their interactions with light require millions of different combinations.

It is true that this type of optical design is not novelty, but this device is the first system that uses optical technology on the front and a processing to form the images. After the finding, researchers are working to add more computational capabilities to the device, not just continued optimizing the quality of the image. For example, add a system for detecting objects or patterns that would be very useful in fields such as medicine.

The usefulness of this House is closely linked to the medicine sector. For example, it would allow an endoscopy, barely invasive, with medical robots capable of diagnosing and even treating diseases, for example, carrying drugs just to the area where they are needed. They could also improve image obtaining for other larger robots; And even complete surfaces could be created full of this type of lenses to capture full scenes.

But what is happening with the chips? Who is who in...