Indian authorities cracked down on public movement and imposed a near-total communications blackout in disputed Kashmir on Thursday after the death of Syed Ali Geelani, a top separatist leader who became the emblem of the region's defiance against New Delhi. Geelani, who was 92 years old, died Wednesday night. His son, Naseem Geelani said that he was buried in a local cemetery in a peaceful funeral. According to him, his family planned to bury him in Srinagar's main martyrs' cemetery, but police prevented them from doing so.

They took his body and forced him to be buried. His burial was attended by no one from his family. "We tried to resist, but they overpowered our efforts and even scuffled among women," Naseem geelani stated.

According to the Press Trust of India news agency, officials interred Geelani's corpse and forbade any mass funerals in preparation of anti-India protests.

Late Thursday, police issued a statement denying Geelani's forcible funeral and calling it "baseless rumors" made by "some vested interest."

The statement stated that such baseless reports, which are part of false propaganda to incite violent behavior, were completely refuted by police. "In fact, the police assisted in the transfer of the body from the house to the graveyard because they were concerned about miscreants taking advantage of the situation."

While most Kashmiris were locked in their homes, soldiers and police patrolled the area. The government forces set up checkpoints in villages and towns in the Kashmir Valley, and placed razor wire and steel barricades across roads, bridges, and intersections.

India used this tactic to stop mass protests by closing down all mobile networks and internet services.

According to the police statement, internet restrictions and shutdowns will continue through Friday.

There were no reports of injuries from the clashes.

Geelani was the leader of Kashmir's struggle for self-determination. He was also a strong advocate of integrating Kashmir with Pakistan. He opposed any dialogue with New Delhi. This position was rejected by successive Indian governments, who often called him a hard-line politician.

Geelani was also the face Kashmir's civil resistance against Indian rule. Geelani was the leader of a faction in the All Parties Hurriyat Conference. This group, which included various religious and political groups from Kashmir, was created in 1993 to lead a movement for regional self-determination.

To counter Indian rule, the group used civil disobedience through protests and shutdowns. After other leaders refused to meet with the Indian government, Geelani led a group of leaders who walked out and split the alliance.

Geelani, for many Kashmiris and others around the world, was an iconic symbol of resistance against India.

Farmer Mohammed Akbar stated that Geelani’s death caused him to feel remorse and anger. He learned that Geelani’s body was buried by authorities, which excluded Kashmiris from the final rites.

Akbar held his grandson in his arms and said, "They are looking for ways to humiliate me." "They even fear dead Geelani."

Pakistan observed a day off and flags flew at half-staff on orders from Prime Minister Imran Khan. The non-public burial of Indian officials was condemned by the foreign ministry.

The ministry issued a statement in Islamabad condemning the Indian police's barbaric act.

According to it, the Indian government was so afraid of Syed Geelani's beliefs that they had to resort to inhuman acts even after Geelani's death. This is a sign of the Occupation Forces' cruelty.

Kashmir has been a flashpoint for India and Pakistan since long. Both countries claim the entire region but have limited control.

Since 1989, rebels have been fighting Indian rule. The majority of Muslim Kashmiris support the rebel goal for the territory to be unites under Pakistani rule, or as an independent nation.

New Delhi accuses Pakistan, which Pakistan refutes, of funding Kashmiri militants. The conflict has resulted in the deaths of tens of thousands of civilians, rebels, and government forces.

New Delhi's decision to remove Kashmir's semi-autonomy and statehood, and to abolish inherited protections for land and jobs caused tensions in the region. Authorities have since brought a slew of new laws, which many critics and Kashmiris liken to the beginning of settler colonialism.

1 After French wildfire decimated grapevines, vintners... 2 Virginia Supreme Court rules that the statue of Gen.... 3 Families are angry and conflicted by OxyContin deal 4 Social media's 70-up "grandfluencers"... 5 China bans TV broadcasts of men it considers not masculine... 6 King Juan Carlos accuses the Prosecutor's Office of... 7 End article 28 of the mortgage law: the inherited... 8 Felix Bolaños defends against the EU and the constitutional... 9 The judges react: With those approaches by Felix Bolaños,... 10 Parents accused of mistreatment will no longer be... 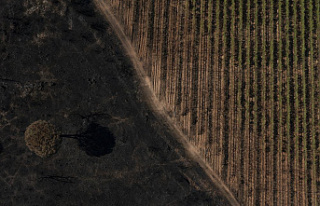