According to ministerial sources, the government plans to limit rent increases to a maximum 3.

According to ministerial sources, the government plans to limit rent increases to a maximum 3.5% for a year to reduce the impact of inflation on tenants.

Monday, February 2, 2012 at 2:30 pm. The National Housing Council (CNH), an organization that brings together housing stakeholders, will be invited to voice its opinion about this proposal measure. This is the government's "rent shield", while tenants are focusing on inflation.

Amelie De Montchalin, Minister of Ecological Transition, and Territorial Cohesion is scheduled to meet with tenants associations who requested a rent freeze.

The amendment finance bill will include the "rent shield" device, which will be voted on this summer by Parliament. According to sources from the Ministries of the Economy and Ecological Transition, the government has decided that there is a "balanced solution", which takes into consideration both the constraints of the owners and the tenants.

The government also plans to upgrade APLs to help tenants who most need them. According to the same sources, these personalized housing aids (APLs) should be revalued starting July 1st, also by 3.5%. This would add 168 million euros to the state budget.

The benchmark rent index could rise to 5.5% by the end, and even higher by 2023's first half. However, rents would only increase by 3.5% if the measure is applied for one year.

According to a source from the Ministry of the Economy, this "positive measure" is not common among neighbours. She assured that the 3.5% increase would be "the maximum possible" but that "a substantial part of the owners will not exceed the ceiling.

Although the government claims that they have never considered a "pure and simple rent freeze", Prime Minster Elisabeth Borne has already stated that it is a "false good idea". He also points out that homeowners are also affected when there is inflation. This could be due to rising maintenance costs or the desire to do energy renovations in their homes. Bercy insists that freezing rents is not a good idea as it would take over the entire housing stock.

1 Video consultations will be available on the NHS App... 2 Twitter tests the 'notes" feature with a... 3 As the cost of living rises, scratch card sales drop. 4 Thousands of BT employees vote for strike action over... 5 Europe is preparing for a trade conflict no one wants. 6 Lindsay Hoyle, Speaker of the House of Commons, promises... 7 Supreme Court limits Biden’s ability to reduce emissions 8 Adele: Simplicity and emotion are sufficient at the... 9 Red Hot Chili Peppers cancel Glasgow concert due to... 10 Gary Butcher: Prisoner booked taxi from cell the night... 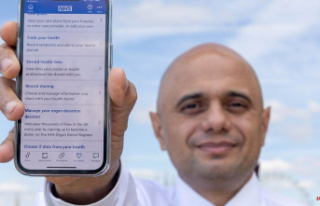 Video consultations will be available on the NHS App...