Because the World Cup is in Qatar: FIFA boss Infantino is experiencing megalomania

Before the World Cup in Qatar, FIFA President Gianni Infantino is making a detour to the G20 summit in Indonesia. Before the World Cup in Qatar, FIFA President Gianni Infantino is making a detour to the G20 summit in Indonesia. In Bali he called on the leaders to interrupt the war in Ukraine for the duration of the tournament. Politics suddenly plays a role again for the FIFA boss.

Gianni Infantino knows what people want to hear. At least that's what the FIFA President thinks. Less than two weeks after his urgent appeal to the countries participating in the World Cup to refrain from sending political messages at the tournament in Qatar, the 52-year-old called for a ceasefire at the G20 summit in Bali advertised in Ukraine. Guns should be silent at least for the duration of the World Cup from November 20 to December 18, declared the most powerful man in world football.

"My request to all of you is to consider a temporary ceasefire for a month during the World Cup," Infantino said in his speech. "Or at least set up some humanitarian corridors - or anything that could lead to the resumption of dialogue as a first step towards peace." He appealed to the summit participants, who included US President Joe Biden, Chancellor Olaf Scholz and Russian Foreign Minister Sergey Lavrov: "You are the leaders of the world. You have the opportunity to influence the course of history."

"We are not naïve and think that football can solve the world's problems," added the FIFA boss. However, the World Cup could be "an occasion for a positive gesture or a sign". Recalling the 2018 World Cup in Russia and Ukraine's joint bid with Spain and Portugal for the 2030 World Cup, the FIFA President concluded that football unites the world.

Less than two weeks ago, the FIFA boss formulated an equally urgent appeal in a letter to the 32 participating countries in the World Cup in Qatar. "Let's concentrate on football," they said at the beginning of November. He was aware that "football does not exist in a vacuum and that there are far-reaching political problems all over the world", and then demanded: "Please do not allow football to be drawn into every political and ideological fight."

However, the request at the time had little to do with the current world situation, but with the displeasure of the World Cup host Qatar, which was increasing to sheer anger. The emirate has been complaining about a "racist" campaign in Europe for some time. In addition to countless documentaries about the human rights situation in Qatar and the repression against members of the LGBTQ community, politicians have also increasingly spoken out in recent weeks.

Last week, Qatari Foreign Minister Mohammed bin Abdulrahman Al Thani accused the German government of "double standards" in the "Frankfurter Allgemeine Zeitung". On the one hand, "the German population is misinformed by government politicians." On the other hand, the government has no problem with Qatar when it comes to energy partnerships or rescuing German citizens from Afghanistan. The resentment in Doha was sparked by statements by Interior Minister Nancy Faeser, who, among other things, had demanded security guarantees for the LGBTQ community.

So far, Infantino has not commented on the situation in Iran, which is participating in the World Cup. The protests against the regime, which have been going on for two months, repeatedly lead to violent action by Iranian security forces against the critics. As the BBC reported, an Iranian court is said to have handed down a first death sentence against a participant in the protests. Human rights organizations warn that the Iranian authorities may be planning "hasty executions".

The protests had recently sparked discussions about excluding the Iranian national team from the World Cup. However, many Iranians hope that the football professionals will use the World Cup in the Gulf Emirate of Qatar for solidarity actions. Numerous Iranian soccer players had already shown solidarity with the protesters in recent weeks. In addition to active players, former professionals have also excelled.

According to his own statements, the Iranian ex-Bundesliga professional Ali Daei rejected an invitation from FIFA to the World Cup in Qatar. "In these days when most of us are not doing well, I have declined the official invitation from FIFA and the Qatar Football Federation to attend the World Cup with my wife and daughters," the 53-year-old wrote on Instagram. "I want to be with you in my country and offer my condolences to all the families who have lost loved ones these days," Daei said. "Hoping for good times for Iran and Iranians." Daei is a football folk hero in Iran.

Back to Russia. Although FIFA suspended the Russian national team from all international competitions after Russia's attack on Ukraine, it did not revoke membership of the Football Union of Russia. And during the World Cup in Qatar there will now also be dedicated fan zones for Russian fans, the Kremlin said after a meeting between Vladimir Putin and the Emir of Qatar, Tamim bin Hamad Al Thani, at the Conference on Cooperation and Confidence-Building Measures in Asia (CICA) in Astana in mid-October.

Following the meeting, Qatar's state news agency QNA announced that Russia was offering "great support" to the desert nation in relation to the World Cup. The "coordination" would therefore "continue, and we thank Russia for it". The news agency also wrote that, according to Putin, "relationships between Russia and Qatar" would continue to develop. Accordingly, Russia, the organizer of the 2018 World Cup, is doing "everything to share our experiences in preparing for the World Cup" and Putin wishes "a lot of success in organizing this major event". 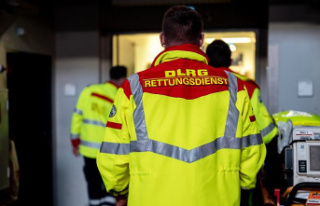 Sexual harassment: the police are investigating against...