Hollywood stars and top athletes found a football club in the USA and make the women big. 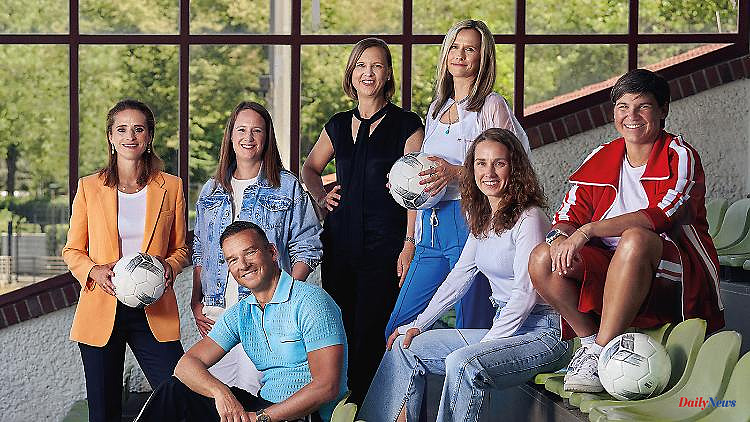 Hollywood stars and top athletes found a football club in the USA and make the women big. National goalkeeper Almuth Schult is moving to Angel City FC - and the idea spread to Berlin. With the help of six initiators, Viktoria FC is set to play in the Bundesliga in five years.

A lot is currently changing at Hertha BSC. Many fans are counting on the new president Kay Bernstein, who can give the often mocked club a new image. Cosmopolitan, young, modern. The newly elected Presidency quickly begins to set an example. This includes expanding the commitment to diversity and gender equality through cooperation with the women's initiative "Football can do more".

Active fans of the "Axel Kruse Jugend" plan to submit an application for the founding of at least one women's or girls' team at the upcoming general meeting. Because the women have not played football at Hertha BSC so far. There is currently only one cooperation with Turbine Potsdam, the only club in the region that is represented in the women's Bundesliga. But the traditional club is sinking into leadership chaos and the sporting heyday, when women played regularly in Europe - and won the Champions League twice, among other things - is over.

In Berlin there is no women's team that plays top-class football. Because 1. FC Union Berlin has no ambitions either. There is one team, but it plays in the regional league, the third tier, and the women are amateurs. There is no money, and because the club sees itself as a training club for women, it will probably stay that way. The focus is on the men.

So the big Berlin clubs are weak when it comes to women's football. Six women don't want to see this any longer and go on the offensive. With its own team, embedded in the club that provided the third professional club in Berlin for men last season: FC Viktoria 1889 Berlin.

The women's team currently plays like Union in the regional league and finished the season in fourth place directly behind Union. But it should arrive in the Bundesliga within five years. An ambitious goal by ambitious women who want to make the club "a brand". One of them is the former national player and current DFB coach for the U19 and U20, Ariane Hingst. Born in Berlin, she will act as a sports consultant. She tells RBB: "We want something to grow there. We want to take people with us, from Berlin and the region."

The idea for the project came from the owner of the BRLO brewery, Katharina Kurz, and the sports journalist Felicia Mutterer. They brought the multi-investor Verena Pausder, Vattenfall board member Tanja Wielgoß, the marketing specialist Lisa Währer and Hingst on board. So that the investors can take action, the club from southwest Berlin unanimously agreed at the beginning of June to spin off the women's department into a separate football limited company.

"This means that the topic of women's football will be upgraded in terms of content, will be appreciated more and can act accordingly as a separate company," Viktoria Managing Director Peer Jaekel told RBB. "The last few weeks and months have shown how women's football is on the rise. When you see the Champions League games and what kind of backdrops were played in front of them, it was simply impressive. Of course that feeds such a vision. " At FC Barcelona, ​​more than 90,000 fans came to the Camp Nou for the international games against Real Madrid and VfL Wolfsburg.

With their vision, the founders follow the example of Angel City FC, to which national goalkeeper Almuth Schult will switch after the European Championship. Two years ago, Hollywood star Natalie Portman founded the US startup together with actresses Eva Longoria and Jennifer Garner, tennis star Serena Williams and former ski racer Lindsey Vonn. They are concerned with financial fairness, with equality in a country where female footballers are much more successful than men, but have had to fight in court for years to get equal pay. Her commitment was only recently successful.

"When we heard about Angel City FC, the scales fell from our eyes," Kurz told the "Tagesspiegel". "We're taking over a club in Berlin, developing it into a joint brand that hasn't existed before and bringing it forward." It's about visibility, better conditions for girls and women, the compatibility of competitive sport and training and initially not directly about "equal pay" because the differences in attention and marketing in Germany are so great. Worldwide, only seven percent of sponsorship money flows into sports with women - an extreme discrepancy. "We no longer want to just talk or wait for women to conquer their place in football. We want to be the accelerator for fair play in sport ourselves," Wielgoß told the "Tagesspiegel".

Viktoria's footballers are to be provided with contracts. What sounds like non-news is actually not normal in women's football. Not even in the Bundesliga can all players live on their salary, in the 2nd division there would only be allowances for travel expenses, according to Kurz at RBB. In the regional league you even pay for your membership in the club. At Viktoria they should then be "at least insured through the trade association", Kurz told RBB: "That's also a big issue. You do sports at a high level, and if something happens to you, then you're not even responsible for some services insured."

With every success, the women get closer to the money. The plan to play in the Bundesliga in five years remains ambitious. However, the shareholders also rely on good sponsors: "It is becoming increasingly important for companies to show their attitude and take responsibility," Kurz told the "Tagesspiegel". The former world-class swimmer Franziska van Almsick, football official Katja Kraus and entrepreneur Lea-Sophie Cramer are now there.

Ambassadors are ex-Justice Minister Brigitte Zypries, DB Cargo CEO Sigrid Nikutta and the sociologist and President of the Berlin Science Center for Social Research, Jutta Allmendinger. Berlin's Governing Mayor Franziska Giffey said according to "Handelsblatt": "Top football is still often dominated by men in the public eye. That's why I support the idea of ​​making football more female in our capital and throughout the country. I wish that for the project Good luck to the initiators and the team."

A completely new foundation was out of the question for the initiators, because this team would have had to start in the district class due to the regulations in Germany. Just like Borussia Dortmund did with their women's team, which managed to get promoted directly in the first year, but still has five promotions to go before they reach the Bundesliga.

Viktoria "only" has to walk three steps. Viktoria's squad is still being expanded, the head coach is to be introduced soon, the sporting direction is in the hands of football consultant Henner Janzen, who specializes in women. In August, the team starts the season with the first round of the DFB Cup. The new project is already stirring up football.

1 'Bullfights are prehistoric': Activists... 2 "That was a mistake": Artists apologize... 3 Cross-platform chats: Does new EU law threaten security... 4 Drome. Valence: Students from La Poudriere show their... 5 North Rhine-Westphalia: shots in the vocational college:... 6 Mecklenburg-West Pomerania: Stralsund: Another tenant... 7 Baden-Württemberg: bird calls and experimental boxes:... 8 Kayak / U23 World Champion. Angele Hug is in half... 9 Browns will pay Baker Mayfield 10.5 million and he... 10 Browns offer Baker Mayfield to the Panthers in a trade 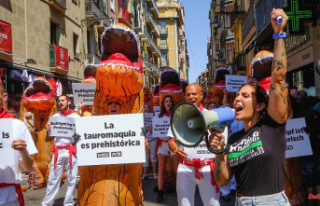