According to the NYPD, the suspect was re-arrested Wednesday at precinct after they discovered he was the suspect of an anti-Semitic hate-crime in September 2021.

New York City police have arrested and charged the suspect following last week's horrendous feces-smearing attack. However, they also discovered that he was the suspect in a September hate crime. He was released on Wednesday.

According to the NYPD, Frank Abrokwa (37), was taken into custody Monday. He was charged with menacing, disorderly conduct, harassment, and forcible touching of a train.

Abrokwa was re-arrested Wednesday for hate crime harassment and hate crime menacing in connection to an anti-Semitic attack in September.

He threatened to kill a Jewish man, called him a slur and spat on him. After he was taken into custody for the feces attack, the NYPD realized that he was the one responsible.

These are only two of the many arrests and releases made by Abrokwa in recent weeks.

NBC New York was informed by the Bronx District Attorney that Abrokwa had been released on his own recognizance, following Wednesday's new charges.

According to the NYPD, Abrokwa was previously arrested on Tuesday, after the feces incident, but before he was identified by police as the suspect. He was charged with robbery and grand larceny.

These charges are related to a reported crime in the which he allegedly stole merchandise from a store. When challenged by an employee, he pulled out a screwdriver. He then held it in a "menacing" manner and challenged them all to call the police.

NBC New York reported that Abrokwa had two additional cases pending in Manhattan regarding misdemeanor assaults in February, in which he allegedly punched people in their faces.

According to NBC New York, none of the charges Abrokwa faced can be used as grounds for him being released on bail under New York's bail reform laws.

"This person should not be on the streets in New York, and his release shows how wide we need to make changes to keep New Yorkers safer," Mayor Eric Adams stated Thursday in a statement.

It is the result of a failing mental health system, a failing housing and support system, as well as failing criminal justice laws. This allows someone with a history or violence that poses a clear danger to public safety to walk out of court.

Janno Lieber is chair of the MTA, the transit agency that oversees the subways where the feces attack occurred. He stated Thursday that Abrokwa’s release was "outlandish".

"I don't know much about criminal justice, but this type of assault, which was violent and horribly victimizing a transit rider, can be committed without any consequences, even though he has four other cases against him, including two transit assaults, and a hate crime. 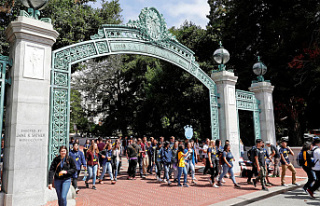 High court side with neighbors in UC-Berkeley case,...