Springer boss Mathias Döpfner has been criticized since the allegations against former "Bild" boss Julian Reichelt.

Springer boss Mathias Döpfner has been criticized since the allegations against former "Bild" boss Julian Reichelt. Now he wants to give up his position as president of the newspaper association - but not because of the "Bild" affair.

Axel Springer boss Mathias Döpfner wants to give his office as President of the Federal Association of Digital Publishers and Newspaper Publishers (BDZV) to new hands ahead of schedule from autumn. This was announced by the association. The 59-year-old was re-elected in autumn 2020 for a second term - four years. In a letter to the state associations, Döpfner wrote: "I would like to hand over my office as president in an orderly manner to new hands, preferably also to new structures, starting in the fall."

He cited two points as justification. With growth in the USA and the purchase of the Politico media group, the largest in the company's history, Axel Springer is in a crucial phase that requires more time and presence in America. "That's why I will no longer be able to get involved with the association in the form and intensity that I believe is necessary for a president."

Döpfner went on to write: "In order to better represent the interests of small and medium-sized, regional and local publishers, you need a person or constellation at the top who does not represent a large, international and very digital publishing house." This has repeatedly led to misunderstandings in the past. In the past few months, there had been criticism of Springer boss Döpfner within the publishers' association, some of which had also been voiced publicly by media companies. There was resentment and even calls for his resignation.

The whole thing was triggered by an article in the New York Times newspaper last fall. The report dealt with allegations of abuse of power against the then "Bild" editor-in-chief Julian Reichelt, who ultimately had to leave the Springer group. The US newspaper also quoted from a private short message from Döpfner to the writer Benjamin von Stuckrad-Barre. In it, the Springer boss described Reichelt as the last and only journalist in Germany who was still bravely rebelling against the "new GDR authoritarian state". Almost everyone else had become "propaganda assistants". Springer classified the short message as ironic.

After that, newspaper publishers accepted an apology from Döpfner for the controversial message at a BDZV presidium meeting. Since then, rumblings have continued in the association, which is currently working on reforming its association structure.

In February, the British newspaper "Financial Times" (FT) also reported on the Reichelt complex and focused on the Springer group management. According to the article, this is said to have known earlier about the allegations against former "Bild" editor-in-chief Reichelt, when the company with its headquarters in Berlin presented it to the outside world. Springer said of the FT report: "The article paints a misleading picture of the compliance investigation, the consequences drawn from it, the entire company and its leadership."

Days later, the BDZV delegate assembly initiated a project group for modernization within the association. Shortly thereafter, it was surprisingly announced that the chairman of the management board of the Madsack media group, Thomas Düffert, had resigned from his position as vice-president of the newspaper publishers' association. Since then he has remained a member of the Executive Committee. The Madsack media group was one of the media houses that had publicly criticized Döpfner for the short message.

The Funke publishing group had also publicly criticized Döpfner and campaigned for a change at the top of the association. The media company brought in a discussion paper with reform proposals in the association. In March, the Funke Mediengruppe then officially announced that it wanted to terminate its membership in the publishers' association as of June 30 - this would mean that it would be leaving at the end of the year. Before that, three BDZV vice-presidents wrote to Funke publisher Julia Becker asking them to remain in the interest group, but at the same time they also supported BDZV President Döpfner. In his letter to the member publishers, Döpfner also wrote: The association has achieved a lot in recent years. "We should continue to act in this unity. Common ground is always stronger than particular interests - especially when they are carried out publicly." 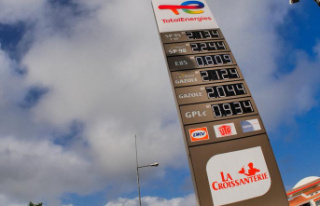 Fuel Prices: There were very slight drops at the pumps...