This year, more than usual, quieter tones are blending into the Unity Day celebrations. 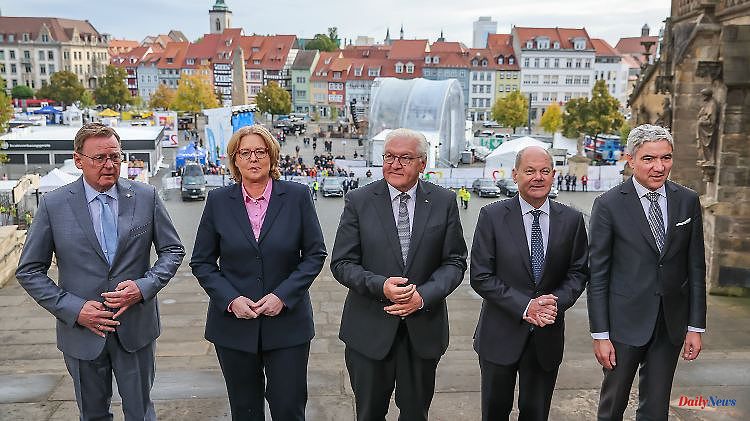 This year, more than usual, quieter tones are blending into the Unity Day celebrations. The war in Ukraine has long since had a variety of effects on Germany. Bundestag President Bäs appeals to cohesion and the value of the argument.

Little euphoria, rather worried tones. It is the day of German unity, but the fear of division, war and crisis resonated at the central celebration in Erfurt. Various, mainly East German politicians warned of the consequences of the Russian attack for the relationship between East and West Germany. Chancellor Olaf Scholz said that the unity of Ukraine should also be defended. Bundestag President Bärbel Bas called for the Federal Republic to take on more international responsibility.

As usual, the speeches emphasized community and solidarity on this holiday, but there were also concerns about drifting apart again: "Whether it's the corona pandemic or energy shortages - the crises of the time show what wasn't right before and bring the existing differences into focus Light from the headlights," said Thuringia's Prime Minister Bodo Ramelow. The economic structure, the world of work and the way of life are about to change. "That triggers fears and worries in many people," said the left-wing politician, who is also currently President of the Federal Council. He probably also had the demonstrations in mind that were planned in many places in East Germany on the day of German unity.

Bundestag President Bas gave the speech in the Erfurt Theater and recalled that she, the West German, had experienced the fall of the Wall in Duisburg. And she had a central message: stick together in the crisis, don't get angry, settle disputes democratically. "How we treat each other is a major factor in determining the strength of our country," said the SPD politician.

She spoke of attempts at division, fake news, hatred and agitation that would endanger this cohesion. "It is necessary for us to talk to each other, especially about sensitive issues such as compulsory vaccination or arms deliveries," said Bas. Democratic disputes lead to solutions. "But understanding and respect cannot thrive in a poisoned atmosphere." She made a simple appeal to citizens: "I wish for less anger and more respect, less bossiness and more curiosity, less prejudice and more empathy."

Scholz assured Ukraine of further support so that it could defend its own unit. Germany has also made it clear to Russian President Vladimir Putin that he cannot move borders "by force," he said in a statement. After surviving the corona infection, he was also on site in Erfurt, but not as an official speaker.

And Bas also warned: "Let's not forget how we ourselves have benefited enormously from our international integration, from reunification and the European Union." Next she said. "Germany is particularly called upon to assume responsibility and contribute to solving global tasks."

The war "endangers the success of the reconstruction of the East and also has concrete effects on our everyday life," said Saxony-Anhalt's Prime Minister Reiner Haseloff of the Düsseldorf "Rheinische Post". Brandenburg's Prime Minister Dietmar Woidke attributed the concerns of many people in East Germany in view of the current energy crisis to the structural breaks after German reunification.

Saxony's Prime Minister Michael Kretschmer called for recognizing the differences between East and West. 32 years after unity, it should be "accepted that there are different perspectives, also when it comes to looking at the war in Ukraine and the question of how to deal with it," he told the editorial network Germany. In the past few weeks, the CDU politician has repeatedly attracted attention with demands relating to Russia's war of aggression against Ukraine, which also led party colleagues to distance themselves. Among other things, he advocated a "freezing" of the conflict and a diplomatic solution for which Germany should work. According to him, energy supplies from Russia should also be maintained if possible.

But Kretschmer is also trying to look ahead: it is time to shape the dawning of the new era together, he said. "This war will be an incision that will go down in the collective memory of the Germans as a common bitter experience."

Traditionally, the federal state that provides the president of the state chamber organizes the central unity celebration. Thuringia's state capital Erfurt had been preparing for the central unity celebration for months - historical buildings in the 1280-year-old city were illuminated by artists, there was live music on almost every corner, bands and choirs performed on stages, and the pavilions of the 16 federal states crowded together the people with hands-on offers.

After a rainy start to the three-day festival, the influx grew steadily: Ramelow spoke of 90,000 visitors by Sunday alone. Tens of thousands celebrated unity in Erfurt - not as a celebration, but as a celebration. 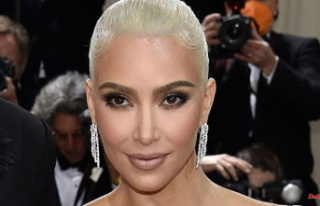 Because of crypto advertising: Kim Kardashian has...