SG Wattenscheid was once mocked by Uli Hoeneß, they played in the Bundesliga thanks to their patron and later went bankrupt: the cult club from Bochum has a unique story to tell of rises and falls. 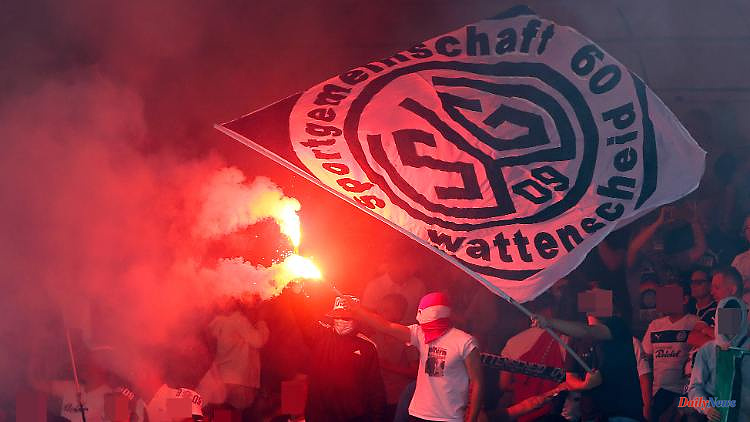 SG Wattenscheid was once mocked by Uli Hoeneß, they played in the Bundesliga thanks to their patron and later went bankrupt: the cult club from Bochum has a unique story to tell of rises and falls. The club is now celebrating in front of a record crowd.

The donkey grabbed the carrot! SG Wattenscheid 09 is promoted and returns to the Regionalliga West. With an uninhibited football party that this club, built on tradition and chaos, has not seen for a long time. Over 6000 fans overran the legendary "Lohrheide" on this Whit Monday. An adjacent sports field had to be opened to resolve the traffic chaos around the stadium. In front of the tills: absurdly long queues for this league. The kick-off was pushed back 15 minutes to 3:15 p.m. The last strong shower clouds had cleared over the district on the A40, the sun was shining brightly, the beer was running smoothly, the best bratwurst in the world was lying on the glowing coals, the magnificent anthem was thundering - and the euphoria of this crashed giant was gigantic.

A week earlier, the SGW had put itself in a position to decide its own fate. In the city, which is now a colossal district of Bochum, they know: it's not a good idea (always has been). Hardly any club has such a wild story of disappointments, crashes and rises to tell. Eintracht from Rheine was a guest on this Whit Monday. This is a club from the Münsterland. You can already see the realms in which the Wattenscheiders are, sorry, were, who once unnerved FC Bayern in the 1st Bundesliga (3:2, 35,000 spectators in the Ruhr Stadium), with icons such as Uwe Neuhaus, Hans-Werner Moser and Souleymane Sané, the famous dad of Germany's enigmatic winger Leroy Sané.

These names still cause great emotions in Wattenscheid. Just like Marek Lesniak or Uwe Tschiskale. Memories of glory days. Today the heroes have other names. Their names are Emre Yesilova, who scored the 1-0 win against Rheine with a penalty, and Dennis Knabe, who finally redeemed the team with the 2-0 a few minutes before the final whistle. Tears from the players, tears from the supporters. Especially among the older ones, whose love the club had put to the test in recent years. Forgive. Anyway. Forget. Also. The SGW is back, albeit "only" in the regional league for now. And they come to stay. Successful coach Christian Britscho celebrated: "We're alive again and you won't get rid of us anymore."

Captain Marvin Schurig also fell into boundless euphoria. The "Reviersport" quotes him as follows: "The whole story is like in the script. It's like a blockbuster. That we then slide up on the penultimate game day and decide the promotion in the last game of the season - you can call Hollywood for that."

The wild intoxication at Lohrheidestraße 82 is to a certain extent a final therapeutic session with one's own past. It oscillates between glorious and embarrassing. Between Bundesliga spectacles and stories that sound so absurd that you can hardly imagine that they actually happened. Founded in 1909, occasionally derided with the nickname "Boobs and Bulls" (because of the brief merger with TV 1901 Wattenscheid to form TuBV Wattenscheid 01 between 1919 and 1923), the history of the club took on the entry of textile giant Klaus Steilmann, one of the most influential figures the economy in post-war Germany really picked up speed in the early 1960s.

With Steilmann, Wattenscheid had a visionary, a patron and later also a dazzling president. At the beginning of the 1970s, coach Karl-Heinz Feldkamp came to the sports community and established a "football of the most modern type" ("kicker") in the Regionalliga West, the second highest division at the time. The euphoria was great, Steilmann aspired to the Bundesliga. For the time being in vain. The attempt to force promotion with the sensational signing of Argentina international Carlos Babington also went awry. The attacking midfielder was in the squad at the home World Cup in 1974 and was voted one of the best players. Four years later he was no longer in the squad. Because he stayed in Wattenscheid. He said. At Lohrheide he delivered stably, ran 120 times in black and white and scored 46 goals.

After years of worrying about relegation, in 1981/82 the club only stayed in the second division, which had since been founded, because the license had been revoked in 1860 Munich, Hannes Bongartz took over as coach for the 1988/89 season and actually led the Wattenscheider to the top flight, thanks to the storming Sensation duo Maurice Banach and Tschiskale (22 and 19 goals). The ascent did not bring happiness everywhere. Uli Hoeneß, the patriarch of FC Bayern, who was still the manager at the time, ranted that it was "the worst" "that could happen to the Bundesliga." Revenge of the Black and White was released in the same season. Although the SGW went down with a bang in the first leg (0:7), the record champions were embarrassed in the second leg (3:2). What a parallel to city rivals VfL Bochum, who also went down 7-0 in Munich last season to humiliate Bayern 4-2 and dream goals in their second meeting of the season.

Gloria, which the SGW is still a long way from. But in the shadow of the imposing Holland colliery, the signs point to continuity and seriousness. The legacy of history is a constant reminder. However, you also know that this club is a sleeping giant. Too big for the Oberliga anyway. Maybe also for the regional league. Only nobody says it anymore. Coach Britscho, who has been in charge since the restart two years ago and has formed a young, hungry, successful team, had “no more goals after the final whistle – except to survive the celebrations.” He felt nothing but pride. "It feels exceptionally good. That's what we said to the boys from the start: come and walk this path with us, then moments like this are possible. That it will happen like this - I could howl." Where does the path lead? no matter for now.

The SG Wattenscheid, whose Bundesliga time lasted only four years, remained a gray mouse in the upper house as a club of progressive development. The sports association was one of the first clubs to play with a back four in defence, while the libero/man-marker (front stopper) system was otherwise preferred. Meanwhile, Britta Steilmann's personality caused a stir. The patron made his daughter the first female manager in the Bundesliga. One of their first decisions: dismissing the promotion coach Bongartz, who was very worried about his team at the time. A decision without success: the club descended - and experienced turbulent decades. In time lapse: descents, ascents, crashes, promises, antics, total chaos and constant existential fears.

There was the story with Galatasary Istanbul. The Turkish football powerhouse wanted to turn SG Wattenscheid 09 into an academy for training talent. There should be financial support for this. The plan failed, and the five-year cooperation was dissolved after one year. The idea of ​​Haalo Technology went down with a similar crash in the summer of 2018. The startup wanted to invest heavily and make the club the most "digitized" in Europe. Absurd fantasies like "cryptocurrency" and "big data" haunted the rocked-down little town. Anyone who has been there knows something: For Wattenscheider it must have felt like the landing of aliens on the ever-congested Ruhrschnellweg. Wild power struggles in the club led to a lightning-off of extraterrestrial ambitions. Right in the middle: the main lender Oguzhan Can, who is now on trial for millions of corona test frauds by his company Medican.

Wattenscheid fell into bankruptcy. On October 23, 2019, after an unsuccessful search for sponsors, the game of the first men's team in the regional league was discontinued. Sports director Peter Neururer had already withdrawn. Another wild story. The involvement of the cult trainer is said to have been based on a misunderstanding. Former Schalke boss Josef Schnusenberg, who was on the SGW supervisory board in 2019, called Neururer and asked for help. He thought of returning to his royal blue heart club - what a mistake. But he didn't want to back down. "I gave him my word. And if I make a promise to someone, I stand by it."

All forgotten story. The truth is out on the pitch this Sunday. Two years after the restart, SG Wattenscheid 09 is rising from the rubble of its chaotic past. From the fan's point of view, she tells it like this: "It's like the donkey who is given the carrot. He runs and runs after it. With the sixth carrot, he thinks: What's that shit about? At Wattenscheid it's the tenth carrot now, at least", a fan named Thomas once confessed to the magazine "11Freunde". How many carrots was that actually? Anyway, the donkey from the A40 finally snapped.

1 At the French Open: Demi Moore turtles with star chef 2 Without a bend, with a greeting?: These standards... 3 Company. Contraception: The pill is in decline among... 4 Bavaria: Dead in a fire in an apartment building 5 Bavaria: fire in an apartment building: 89-year-old... 6 Haute-Provence. 300 liters soda poured on the Saint-Auban... 7 Saxony-Anhalt: fire at the recycling center in Halle:... 8 Partnership in migration: Baerbock certifies that... 9 Lock screen in focus: This brings iOS 16 10 Climate change simulation: Immediate emission stop... 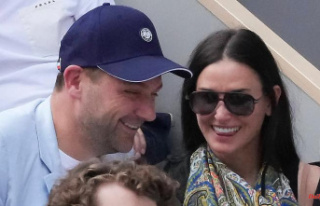 At the French Open: Demi Moore turtles with star chef