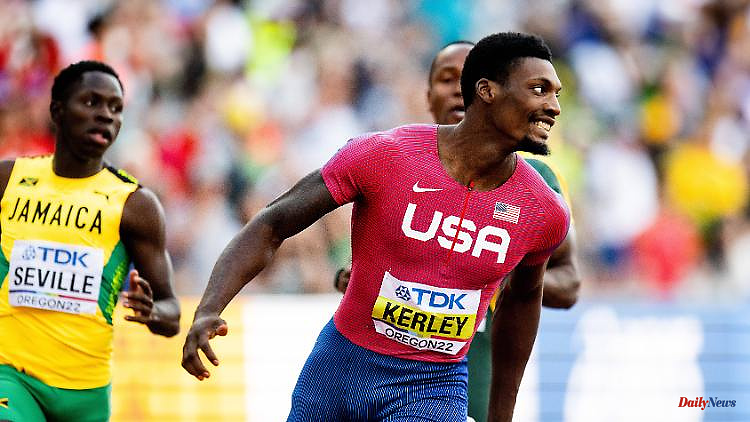 Top favorite Fred Kerley wins the 100 meter sprint at the World Athletics Championships. The American wins ahead of his compatriots Marvin Bracy and Trayvon Bromell. It is the third time the USA has won gold, silver and bronze in the 100 meters and the first time since 1991.

First, two jet fighters thundered over Eugene's Hayward Field, a few minutes later the US sprinters were chasing the new 100-meter king Fred Kerley to gold, silver and bronze: For the hosts, the big showdown at the home WM brought the longed-for big coup. "We said we would do it - and we did it. USA, baby!" Kerley yelled into the stadium microphone after winning the supreme discipline in athletics in 9.86 seconds at the home World Championships in Eugene . Behind the 27-year-old, Marvin Bracy and Trayvon Bromell ran simultaneously in second and third place in 9.88 seconds.

For the third time in the history of the World Championships, a nation managed the "sweep" - and for the third time the USA succeeded: at the premieres in 1983 and 1991 in Tokyo, the great Carl Lewis had the triple victory of the Americans ahead of Leroy Burrell and Dennis Mitchell cited. The Americans, who were represented by four sprinters in the eighth field of the final, could even cope with the fact that defending champion Christian Coleman was only sixth - that didn't spoil the joy of the third world title in a row over 100 meters.

However, the US trio lacked perhaps their toughest rival. Olympic champion Marcell Jacobs from Italy did not compete in the semi-finals due to a hip injury. The national association only announced the waiver shortly before the race on Saturday evening. Accordingly, the 27-year-old is suffering from a muscle injury that he had already brought to the USA. "It's a painful decision, but I really wanted to be there in Eugene, but I'm not 100 percent," said Jacobs. Jacobs and the association left open whether he will still be in the 4x100 meter relay.

Jacobs clocked 9.80 seconds in his sensational triumph in Tokyo - a European record. Kerley came to the World Championships with a season best of 9.76 seconds, having already run 9.79 seconds in the lead-up. The world record of 9.58 seconds set by Usain Bolt in 2009 remained out of reach. Nevertheless, it could have been a really big duel of these title fights. Kerley's victory was the eleventh world title for the USA in the men's 100 meters. The country has now won a total of 28 medals in the competition, more than all other nations combined, according to official figures. "All of us wanted gold. I'm just so glad we got it all back home in Oregon," said Bromell, who had his biggest single win. The World Championships will be held in the USA for the first time.

Kerley's (hero) story, meanwhile, is one that Americans love. "I grew up in the church," says Kerley, a devout Christian from Texas. "You have to have faith to get to the top. You have to believe that you're going to win. You have to believe that you're going to do great things - and I believe that I will achieve great things." As a toddler, Kerley and his four siblings were adopted by his aunt Virginia, she raised 13 children with them, not everyone was always fed, as a teenager Kerley almost ended up in prison. He got into college through sports. Now he should have taken care of it. 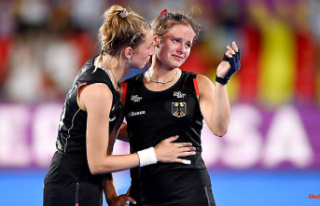