Beware of these Amazon scams: could steal the bank's data

The scams with Amazon are nothing new, but as the giant of electronic commerce reaches more and more people, the scammers give with new tactics to try to take a The scams with Amazon are nothing new, but as the giant of electronic commerce reaches more and more people, the scammers give with new tactics to try to take advantage of a dismissal or less showers with technology.

According to the ESET cybersecker company in its corporate blog, the three most common forms of scam linked to purchases in Amazon are the 'Phising', the use of gift cards such as hook and scams with payments outside the platform.

The latter is perhaps the least usual, but the most dangerous. Although Amazon controls who they sell in their store and what products can be sold, sometimes they are hit scammers who put a great offer on the platform, but they do everything possible so that the transaction is carried out outside of the safe payment systems.

The scammers put a phone to which the user calls and often negotiate a much lower price for the announced product. But when making the payment, they disappear and they never send anything.

The other forms of scam are more common. First, the phising, or the attempt of identity supplementation, is done through emails or SMS almost always. A very common scam is a notice of an account that is attempting to pass through Amazon in which they urge you to click on a link to unlock your account. It is a stratagem to get your personal data and, in some cases, even bank data with which you can steal money.

The other form of scam that is proliferating more and more is related to gift cards. It is possible that an email or even a telephone call urges us to give access to Amazon and bank data to unlock our account.

The reason: that we have used many gift cards and we could be penalized for it, unless, urgently, to deliver those data. Obviously, it is a lie and use the urgency to capture people and try to cheat it.

The safest thing to avoid scams related to Amazon is always to look at that the sender is really who says it is. A phising or scam mail is caught very fast because the sender is never going to have a finished address at "Amazon.com", which is the one who sends offices and official notices. Similarly, Amazon will never make phone calls asking for personal data

1 Bungie announces the novelties of Queen Witch, the... 2 Whatsapp will allow you to send money in the style... 3 Elon Musk announces that he will create a real and... 4 30 years of the first public access to a web page... 5 Discovered a failure that allows you to hack any device... 6 PIXEL 5A: This is how Google's new cheap mobile that... 7 The Chinese Government sneaks into the Board of Directors... 8 Call of Duty: Vanguard will be launched on November... 9 Condemned for spying and harassing his exnovation... 10 Facebook wants you to have work meetings actually... 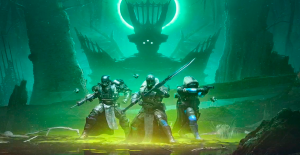 Bungie announces the novelties of Queen Witch, the...