Sources of the General Prosecutor's Office argue that the delay in closing the investigation around which it was one of the Villarejo Case Prosecutors, Ignacio This has been explained this Wednesday sources of the Technical Secretariat of the Attorney General's Office, an organ that advises the State Attorney General, Dolores Delgado. The Chief of the Technical Secretariat, Álvaro García Ortiz, Right Hand of Delgado in the Public Prosecutor's Office, has given explanations on the matter to the members of the Fiscal Council.

The Association of Prosecutors, majority in the race and with representation in the Council, and the Independent Prosecutor's Prosecutors had requested clarification on what happened. They did so after the prosecutor Stampa submitted a claim of patrimonial responsibility after being the only one of the prosecutors who was provisionally in anti-corruption and who was not renewed in the position.

When the meeting was produced to grant the fixed squares in the Anti-Corruption Prosecutor, the investigation of the Prosecutor's Office of Madrid around Stampa was still open, despite the two archival proposals of the prosecutor who instructed it. On both occasions, the Technical Secretariat had requested that new diligence be practiced.

The two Associations of Prosecutors had requested that in the Fiscal Council on Wednesday, the full file on the investigation of the Prosecutor be provided. The Association of Prosecutors has denounced that the Attorney General, who presides over the Council, has denied access to that documentation they claimed.

"We see ourselves forced to reproduce this request in writing. We understand that consideration as reserved and refusal to communicate this documentation to the Fiscal Council, does not help to clear the doubts created and affects Article 23.2 of the Spanish Constitution that consecrates the right to Exercise public office without illegitimate disturbances, so we demand an express, reasoned and non-restrictive response, as an essential request for the exercise of our functions, "has held the association in a statement.

"Greater abundance, we consider that the EXCMA. Ms. General Fiscal of the State can not take this decision, or intervene in the debates for preventing article 15.2 of the Internal Regime of Fiscal Council. It concours at our trial cause of abstention," he adds The Association of Prosecutors.

At the origin of research to Stampa is a complaint of VOX against the Prosecutor, which the Technical Secretariat forwarded to the Superior Prosecutor's Office of Madrid. In the complaint, possible filtrations were raised to Marta Flor, Lawyer of We can, on how they should act on the accusation for the robbery of a memory card to Dina Bousselham, former Pablo Iglesias advisor. The messages that the lawyer shared in a chat with the legal team of welter gave rise to interpreting that a crime of revelation of secrets by the prosecutor could have been committed.

Sources of the Technical Secretariat have denied that after the request to move forward with the research to Stampa, the intention of slim from getting around Villarejo. They have highlighted that the Attorney General could propose for the places to cover the names that it seemed, with or without open investigation.

As for the proceedings that the Technical Secretariat asked to continue practicing were those of questioning the initial complainant of the facts, the former lawyer of we can José Manuel Calvent. This diligence had been agreed, but it had not been practiced due to the restrictions of the Covid-19 pandemic. He also insisted on incorporating the file a copy of that Chat chat.

The objections of the Technical Secretariat to the Archive were detained with the renunciation of the Instructor's case, the TSJ Fiscal Lieutenant of Madrid. He assumed him the then superior fiscal, Jesus Knight Klink. He ended up closing the case after partially attending the suggestions of the Technical Secretariat. By then Stampa had already run out of a place in anti-corruption.

1 Performers gear up for the Macy’s Thanksgiving Day... 2 Review: The sunny, shaggy ‘Licorice Pizza’ soaks... 3 1966 death of Doris Duke employee an accident, review... 4 Exterior Protesta Anta Rabat by the installation of... 5 The best moments of Will Smith in El Hormiguero: From... 6 Leticia Dora breaks the prize that won her series... 7 This will be the new trap a million prepares antenna... 8 The night D ends with Dani Rovira singing with the... 9 Cardo: Ana Rujas superstar 10 Patricia Pardo is barefooted and joked about the height... 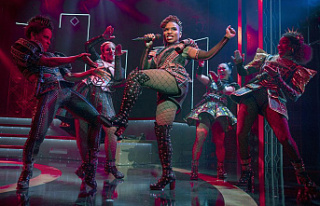 Performers gear up for the Macy’s Thanksgiving Day...