When the Taliban invade Kabul, Hikimi is already in Germany. 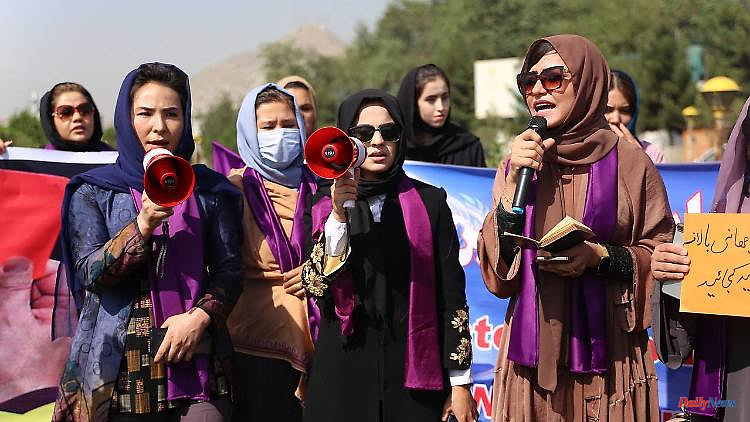 When the Taliban invade Kabul, Hikimi is already in Germany. A few months earlier, he survived an attack aimed at him. Today he works for the Kabul Airlift - a small organization that aims to do nothing less than break up the German immigration system.

To this day, Abdul Qader Hakimi does not know who shot him. They came out of nowhere, the two men. Covering their heads with shawls, they raised their guns and shot at Hakimi and his two friends. He thought they were shooting at someone behind them. "I just ran," he tells ntv.de. As they followed him, it quickly became clear that the shots were actually aimed at him. But instead, a friend died.

Hakimi had just completed his master's degree at the Technical University of Berlin and had just returned to Afghanistan. "I never wanted to leave Kabul," says Hakimi. But less than two weeks after the attack, he was on the plane back to West Germany. Not even the Afghan government, for which he worked as a blockchain developer, could guarantee him protection. The head of security in the Afghan parliament told him: "If you want to kill a politician, you will do it." His fictional certificate, a temporary residency permit, was still valid, so he flew back to safety. But the local immigration authorities rejected his application for a work visa. "They called me a criminal."

The 29-year-old only had a few weeks left before he would be in the country illegally. Returning to Afghanistan was not an option. That would be tantamount to attempting suicide. Because the Taliban were on the rise. In March 2021, six months before Kabul fell to the Islamists, Hakimi's name was already on their hit list.

Today, Hakimi sits in a minimalist office in the Friedrichshain district of Berlin. He received his work permit six months ago and is now helping with the Kabul Airlift people who, like him, are in danger of being transported out of the country in Afghanistan. The official withdrawal of the Bundeswehr from the country was completed a year ago, but the list of local workers is long. Hakimi takes care of them. He works with concentration on his laptop, only now and then he looks out of the large window in front of him at the side street.

The Kabul Airlift emerged in the wake of the West's chaotic withdrawal from Afghanistan after the Taliban took power in August 2021. It began as a group of journalists and activists hoping to evacuate their former colleagues, friends and acquaintances. The organization is now not only concentrating on individual evacuations. That wouldn't be possible with a database of around 50,000 names either. Today it is about nothing less than questioning the entire German immigration system.

The Berlin office looks like the airlift just moved into this building. She has been here since autumn 2021. The white shelves at the back of the room are empty, as are most of the desks. Everything seems improvised. Crumbs are strewn on a central table, half-empty Mate bottles are scattered around the office, and the trash can in the corner is filled to the brim with empty food wrappers.

The building of the Foreign Office is less than five kilometers from here. 2972 employees are located in the headquarters in Berlin. In 2021, they worked on German foreign policy with 6.301 billion euros. The care and evacuation of the Afghans who register in the airlift database are actually the responsibility of the Federal Foreign Office. Instead, Hakimi and nine other employees are sitting in Berlin-Friedrichshain trying to evacuate as many people as possible.

If Hakimi hadn't made it out of Afghanistan, he would probably be relying on the help of the Kabul Airlift himself today. With a scholarship program, he completed a master's degree in computer science at the TU Berlin. After graduation he was supposed to return to Afghanistan - one of the conditions for his stay was that he would not look for a job in Germany. So he went back to Afghanistan. There he worked for a company that was supposed to support all ministries in Kabul with the digital transformation. The aim was to strengthen democratization in the country. While not directly employed by the German authorities in the country, he did what they fought for.

When the Taliban began plotting to take power, people like Hakimi were intimidated. Like him, many other colleagues received anonymous threatening phone calls. They knew who was trying to scare them because they worked to prevent undemocratic authority like that of the Taliban. At the latest when the Islamists moved into Kabul on August 15, 2021, Hakimi's former colleagues were in mortal danger.

After the Taliban took power, the federal government created the so-called Human Rights List. On it are the names of people who worked as local staff for the Bundeswehr and the German government on site in Afghanistan. They could have been evacuated by the federal government by August 31. However, many either did not make it to the airport in time or were not properly informed.

The federal government has flown out a total of around 21,000 people, according to a response to a request from the Left Party. Another 12,000 Afghans have already been accepted but are still waiting to be evacuated. According to the Kabul Airlift database, that's just a fraction of the people who remain at risk in Afghanistan.

With the change of government in Berlin, a new Federal Chancellor, a new Interior Minister and a new Foreign Minister are now responsible for German immigration policy. An admissions program is included in the coalition agreement - and has been worked out with 30 NGOs and civil society organizations since February. A colleague of Hakimi, Tareq Alaows, is currently negotiating a federal admission program for the Kabul airlift with the responsible ministries. "The political will is there," says Alaows. "But it fails because of the bureaucratic implementation."

In the absence of a federal admissions program, the Kabul Airlift focuses almost exclusively on the evacuation of human rights activists. Individual applications can be submitted now. But each application is more than 200 pages long, according to Alaows. The requirements for these applications are so high that a person concerned cannot cope with them alone. Therefore, civil society organizations feel compelled to take on the task. At the Kabul Airlift alone, which is financed exclusively by donations, six of the ten employees are currently only working on these individual applications. "A nationwide admissions program must offer a low-threshold procedure so that those affected can apply for admission themselves," says Alaows.

When Hakimi talks about this list, he becomes restless. Since he has been working for the Kabul Airlift, sleep has only come sporadically. Not only because he is repeatedly sent back to the site of the attack, but also because he receives a flood of e-mails from people seeking protection every day. "They're begging for help," he says.

When Hakimi was on the plane to Germany a year ago after his friend was killed in the attack, he had no idea what troubles awaited him. That he would wait almost a year for a work permit. That about 40 e-mails he wrote to the immigration office would go unanswered. That he would not get a residence permit despite a German university degree and several job offers - until he met Tareq Alaows.

Alaows sits in the back corner of the office. He looks at his Apple Watch, the next call is already coming in. As with every phone call, he answers with "Hello, my dear". Alaows has only been with the Airlift for a short time, but on the phone he sounds like he's been running the place forever. He rattles off immigration laws with ease - he talks about paragraphs of immigration law as if they were tram stops he drives past every day. "This is a 17.2 case, not a 17.3 case," he says to his interlocutor on the phone. At Tareq, the Foreign Office is called "AA" and the Federal Ministry of the Interior "BMI".

He can't talk in detail about what the phone is about. Except that the way the Airlift works has changed a lot since it was created. The database that Hakimi maintains has changed everything. In the first 24 hours after it went online, 6,000 applications were made - the system now has 50,000 names. People who are still in Afghanistan and don't know how to get out can put themselves in the database. If the organization processed each case individually, "we wouldn't be done in ten years," says Alaows. But without a recording program, there is currently no other way.

Hardly anyone knows the German immigration system better than Alaows. Not just because he studied law for years. The knowledge he has about the Dublin III rules or the practical implementation of immigration and asylum law comes from personal experience. Originally from Syria, Alaows came to Germany in 2015. He taught himself his rights and those of millions of other people on his cell phone in a refugee camp in Bochum.

With his knowledge, he helped Hakimi get a work permit, which he uses to promote class action lawsuits for the Kabul Airlift. Alaows is usually one of the first to come into the office, which gradually fills up. The employees open their laptops and disappear into the world of the Kabul Airlift. Only now and then the concentrated silence in the room is broken by a ringing telephone. Otherwise, only the bare essentials are exchanged.

There isn't much time for the chess board on Alaows' desk either. When he plays, he plays alone, takes both positions. Just like in everyday life with the Kabul airlift: He knows what it means to have to seek protection in Germany. But after more than seven years in the Federal Republic, he also knows what it means to arrive here. "I always try to put myself in both places," he says. Then he looks back at his Apple Watch. The next call comes in, and Alaows replies, "Hello, dear."

1 European Championships: Germany eight misses medal... 2 Ex-Bayern striker: embarrassment averted at the last... 3 Russia dependent on ferries: London: Dnipro bridges... 4 "A Colt for all cases": Emily Blunt is part... 5 Merz on talks with Russia: "Germany has no mediating... 6 "Asked - Hunted": Show anniversary with... 7 Death of Sempé: tribute to the master of humorous... 8 Conspiracy rage in MAGA-Land: For Ex-President Trump... 9 Those were the five main mistakes made by the German... 10 Sempé, in an interview in 2019: "I would have... 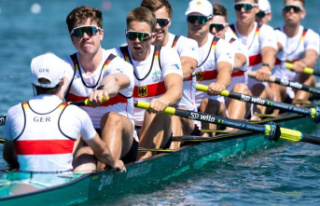