For decades, together they formed the largest country on earth, but since their collapse, the relationship between the former Soviet states and Russia could hardly have been more different. 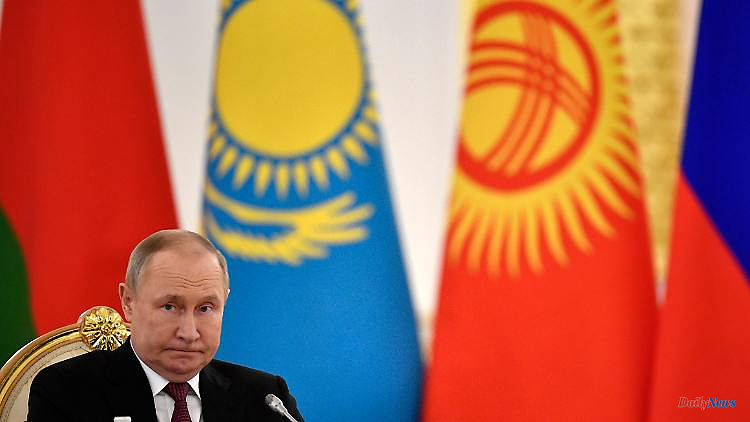 For decades, together they formed the largest country on earth, but since their collapse, the relationship between the former Soviet states and Russia could hardly have been more different. Some are close to the Kremlin, others fear they could become Russia's next target. Some people have a dual strategy.

Greater Russia fantasies, dreams of a new Soviet Union, threats to the Baltic States. Russia's war against Ukraine will not be the last should President Vladimir Putin's troops triumph in the neighboring country. A number of Russia experts and war observers are convinced of this. "If you believe Putin's statements, and I think you have to believe them, then Putin's concern is territorial expansion or at least control of much more territory than just Donbass and Crimea and the land bridge," said Carlo Masala made clear in June in the Stern podcast "Ukraine - the situation" by the Bundeswehr University.

The military expert is convinced that Russia's president wants to "enlarge the sphere of influence of the Russian Federation". There are many possibilities. These range from buffer zones with NATO on Russia's external borders to the establishment of a new Greater Russia, possibly within the borders of the former Soviet Union.

After its collapse in the early 1990s, the USSR broke up into 15 sovereign states. Under international law, Russia is regarded as the direct successor to the Soviet Union. Moscow's relationship with the 14 other post-Soviet states could hardly be more different.

Ukraine: Putin is trying to erase Russia's most populous neighbor from the map. His brutal war of aggression against Ukraine has been underway since February 24.

Belarus: The only ex-Soviet country that stands unconditionally with Russia. At the United Nations, Belarus was the only post-Soviet country to vote against condemning Russia's war of aggression. The country is also part of the Collective Security Treaty Organization (CSTO), the Russian-dominated military alliance.

Belarus is a dictatorship led by ruler Alexander Lukashenko, who is supported by Putin. In return, Belarus is helping its big neighbor logistically in the Ukraine war. Lukashenko only refrained from sending his own soldiers. He is probably afraid of new mass protests by his own people. These almost brought down the regime in 2020.

Lithuania: As part of the Baltic States, Lithuania clearly oriented towards the West after the end of the Soviet Union. Lithuania has been part of the EU and NATO since 2004. At the UN, Lithuania, like the other two Baltic states, voted to condemn Russia's invasion of Ukraine. In recent months, Lithuania has taken on Russia. In the meantime, Vilnius has stopped Russian goods transports on their way to the Russian exclave of Kaliningrad. Only when the European Union persuaded Lithuania to give in was transit traffic resumed. Much to the annoyance of Lithuania, which warns against backing down from Putin and prefers to show strength. Both countries are still closely intertwined economically. Russia is the most important export and second most important import partner.

Latvia: Unlike in Lithuania, there is a large Russian minority in Latvia. A quarter of the two million inhabitants are Russians. But only older people still support Putin. Latvia has also been a member of the EU and NATO since 2004. Compared with the other Baltic states, Latvians are economically the least dependent on Russia. Only 7 percent of exports go to the neighboring country to the east, and 9 percent of Latvia's imports come from Russia.

Estonia: In Estonia, too, almost a quarter of the population is of Russian descent. Russia is the most important importing country, but economic relations are to be gradually dismantled. Estonia, on the other hand, wants to intensify its relations with the West. Tallinn also joined the EU and NATO in 2004. Faced with Russian fantasies of conquest, Estonia, like its Baltic neighbors, is worried about becoming the next victim of Moscow's aggression. Putin indicated in June that he considers the Estonian city of Narva to be Russian.

Republic of Moldova: The Republic of Moldova is clearly on the side of Ukraine. At least most of the state. A small area on the Moldovan-Ukrainian border is dominated by Russia: Transnistria declared itself independent after the collapse of the Soviet Union and has its own government and parliament. According to international law, however, Transnistria is still part of Moldova, and no country in the world recognizes the area as sovereign.

However, Russia supports the Transnistrian separatists financially and in terms of security policy. Moscow supplies free gas, pays pension subsidies, and issues Russian passports. And soldiers from Russia have been stationed in Transnistria as so-called "peacekeeping troops" for three decades. "Russia is creating ongoing instability in the region by keeping this de facto state alive," Sabine von Löwis from the Center for East European and International Studies analyzed in the ntv podcast "Learned Again". Although the Republic of Moldova is now an official candidate for EU membership, with a separatist region on its own territory that wants to become part of Russia, it will have a hard time becoming a member country. Moldova voted for UN resolution condemning Russian war of aggression.

Georgia: Russia also exerts influence in Georgia. The country on the Black Sea, south of the Caucasus, has two separatist regions on its territory: Abkhazia and South Ossetia. When mother state Georgia tried to retake South Ossetia in 2008, Russia intervened and pushed back the Georgian military. After five days the war was over. NATO or EU membership is still a long way off for Georgia, despite new attempts in the wake of the Ukraine war. Russia is allowing a conflict to smolder on Georgian territory by supporting the separatists in Abkhazia and South Ossetia. Georgia has also condemned Russia's attack at the United Nations.

Armenia: Georgia's southern neighbor is dependent on Russia. 27 percent of Armenian exports go to Russia, while Armenia gets a third of its imports from Moscow. Armenia is neutral on the Ukraine issue, but cannot afford to alienate Russia either. In the conflict with neighboring Azerbaijan over the Nagorno-Karabakh region, Armenia is dependent on Russian aid. Since the second war in 2020, CSTO member Armenia has only been able to access Nagorno-Karabakh via a corridor controlled by Russian soldiers.

Azerbaijan: The country between the Caspian Sea and the Caucasus is neutral with regard to the Ukraine war. Azerbaijan is trying a dual strategy: not condemning Russia, but at the same time ensnaring the West with new gas deals. Ukraine is also being supported: Baku is sending humanitarian aid supplies, and the state oil company also operates 59 gas stations in Ukraine. Ukrainian ambulances and fire engines are allowed to refill fuel there free of charge. In 2020, Ukraine sided with Azerbaijan in the Nagorno-Karabakh war.

Kazakhstan: No ex-Soviet state is as dependent on Russian imports as the world's largest landlocked country. Kazakhstan is also a member of the CSTO. There are also close ethnic and cultural ties. 18 percent of the 19 million citizens are Russians, in northern Kazakhstan they even make up the majority of the population. But in the shadow of the Ukraine war, Kazakhstan is currently pursuing a dual strategy. The EU is pitching the Central Asian giant as a possible gas supplier of the future, while emphasizing Ukraine's territorial integrity. At the same time, attempts are being made not to alienate Russia too much. "Kazakhstan is attempting an economic-political seesaw policy. They want to play off the wealth of resources," explains the Viennese political scientist and Central Asia expert Hannes Meissner in the ntv podcast "Learned again".

Since the start of the Ukraine war, the population has feared that one day Russia could also invade Kazakhstan. They fear that the large proportion of Russians in the Kazakh population could be a welcome excuse for Putin to use armed force to protect the Russian minority. In the past, Russian nationalists have called for the Russian-dominated north of Kazakhstan to be annexed. Russia's ex-president Dmitry Medvedev recently fueled these efforts, provided his social media account was not, as he says, hacked.

Uzbekistan: Uzbekistan is somewhat less dependent on Russia. Although Moscow is still the most important import partner, expert Hannes Meissner speaks of an "open and clear conflictual relationship" with Russia. Uzbekistan left the CSTO in 2012. The country did not take part in the first vote on the UN resolution and abstained on the second. "Uzbekistan does not recognize Crimea, Donetsk and Luhansk as Russian. They have emphasized Ukraine's territorial sovereignty," reports Meissner.

Tashkent is concerned about the Kremlin's Greater Russia fantasies. And like many other ex-Soviet republics, Uzbekistan has trouble spots on its own territory. In July, bloody protests broke out in the autonomous republic of Karakalpakstan, killing 18 people. Hannes Meissner is convinced that Russia had a hand in the unrest. There is "a strong rumor that the Russian foreign intelligence service played a role in the outbreak of these unrests," said the expert on "Learned Again." To show Uzbek President Mirsijoyev that Uzbekistan "is dependent on Russia for security policy."

Tajikistan: The Central Asian country gets a third of its imports from Russia and is a member of the CSTO. Tajikistan abstained at the United Nations. The country cannot afford to condemn Russia because Moscow has deployed soldiers in the country to protect Tajikistan from the Taliban and IS from neighboring Afghanistan.

Kyrgyzstan: Kyrgyzstan also gets a third of its imports from Russia. Unlike Tajikistan, Russia is also an important export partner for the country. Kyrgyzstan also abstained from the UN resolution. The country is geographically the furthest away from Russia, but as a member of the Russian-dominated CSTO military alliance, it is heavily dependent on Moscow for economic and security reasons.

Turkmenistan: How the dictatorial country in Asia stands on the Russian war of aggression is unclear. Turkmenistan was not present at both UN votes. Dictator Gurbanguly Berdimuhamedov rules his country with an iron hand and determines what kind of news its citizens see. The Ukraine war is not discussed at all in Turkmenistan.

In this way, no protest movement can develop like in other post-Soviet countries. The citizens of the individual states are mostly on the side of Ukraine, writes the Center for East European and International Studies. Wherever demonstrations are allowed, there have already been large demonstrations in solidarity with Ukraine. 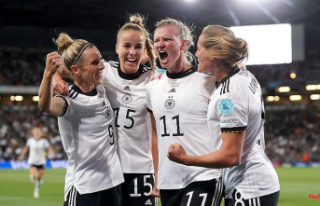