DBB historical and hungry: Bronze heroes are eager to travel to the top of the world

The German basketball players win bronze - and much more than that. 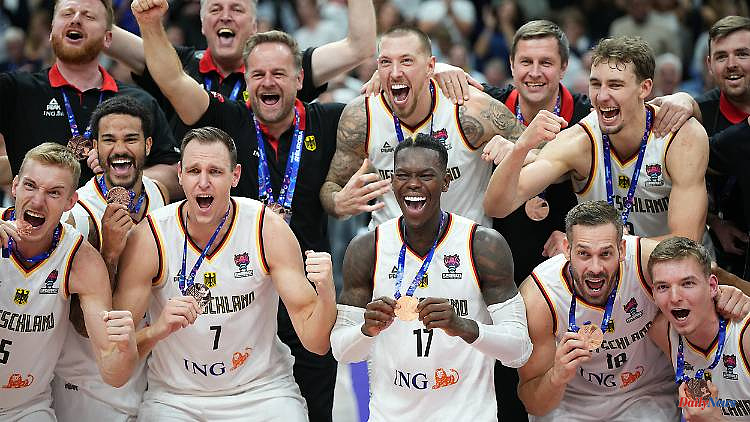 The German basketball players win bronze - and much more than that. At the home European Championship they kiss the country awake with spectacle and drama. Now a hungry DBB team wants more, which believes in the big hit.

Dennis Schröder is once again focused on the free-throw line. In the game for third place at the European Basketball Championship, points 25 and 26 of the point guard are no longer important in these last few seconds, when MVP calls are heard in the Berlin hall. Because the 82:69 victory over Poland is perfect. The German players heart each other on the bench, jump jubilantly onto the floor, coach Herbert claps fair from the opponent. And Germany wins bronze.

It is the fourth medal ever won by a DBB team. The first in 17 years. But the national team has won so much more. "Get yourselves bronze," demanded Chancellor Olaf Scholz and Dirk Nowitzki in unison on Twitter before the game. But before Daniel Theis struts across the field with his children, before the EM heroes climb onto the stage beaming with medals around their necks, they have to go a very long way in a turbulent game.

Even if the team is almost always in the lead, the legs are very tired after the dramatic elimination against Spain in the semifinals. But nobody remembers that later. What counts is the history, because on this Sunday evening in Berlin "we made history," Schröder says happily. And if the DBB pros have their way, this chapter should only be the first of a long journey.

At half-time, Germany only scored 36 points, their opponents even 13 less. The teams are undercutting each other with poor shooting rates and defensive sequences. That the German team has had little speed in the game for a long time, that the body language is not right at all, that Schröder loses a lot of balls (eight turnovers are compared to six assists in the end), that it is anything but a basketball gala against Poland in terms of quality? Free! Because every fan notices that evening that a team has grown together here that will bring a lot of joy in the years to come.

The medal is also a sign that we can count on Germany at major tournaments in the future. For example at the World Cup next year or the Olympic Games in 2024, where the squad will still play together (NBA professionals like Maxi Kleber and Moritz Wagner as well as Isaac Bonga from FC Bayern could still join) and then appear even more committed. "A lot is possible for the future, we laid a good foundation here at the tournament and have a lot in our own hands for the coming tournaments," says Andreas Obst with the medal around his neck. "We have the talent and the team structure to play at the top."

Johannes Thiemann adds: "Even before the tournament, we were claiming to be among the best teams in the world. But the fact that we've won the medal shows that it really is the case." Maodo Lo also believes that "everything is possible at the World Cup" because the team "still has room for improvement" and can "play even better" than at the European Championship. The basketball players have not only won bronze, but are also richer in experience. That might be worth almost as much. They now know that they can keep up with the greats.

Of course, the USA play in their own category, but then there is a pool of top teams that now also includes the DBB team. "The talent and the quality are there, it deserves attention," confirms Niels Giffey, who admits that he "didn't know anything" about the historical dimension of the medal. Particularly important for the coming years: The basketball players declare that they are "committed" for the next summer. "The camaraderie with me was the most important thing," sums up Franz Wagner. "It would have been a really great summer even without a medal."

Now they are all eager to fight for medals with the "boys" in the next few years. This is also supported by the disappointment that resonates with the professionals in the mixed zone despite the medal. Immediately after the game you're hungry for more. These guys want to win. Something golden next time. "We're a bit sad because we had the feeling that there was still a little more to it than bronze," says Jonas Wohlfarth-Bottermann. "It has a bitter aftertaste because we certainly had the opportunity to be even higher on the podium," says Obst.

Back to the game. After the poor start, the throws fall in the second half, also from outside. However, on both sides. Germany suddenly has to be careful, the lead melts to seven points. By the end of the third quarter there were only five left. They also went into the final section with a narrow lead against Spain. Seven and a half minutes before the end, Poland suddenly managed to equalize to 59:59, but it crackled again in the hall.

But this time the DBB team doesn't give in, leader Schröder and player of the game Johannes Voigtmann (14 points, 9 rebounds, 4/5 three-pointers, 6 assists) take over and lead their team to medals. But German basketball didn't just win bronze that evening. He settled more and more in the country throughout the tournament and finally kissed Germany awake a little. The DBB team started as an outsider in the "horror group", then enthusiastically played out four great victories in front of frenetic fans (the drama against Lithuania with two overtimes stands out), narrowly lost a showdown with megastar Luka Doncic and the Gala against Greece presented by Giannis Antetokounmpo.

It's probably the best basketball a German national team has ever played in a tournament over two crazy weeks. "I hope that German basketball will get bigger, that we've made German basketball more attractive and sexier," Schröder said after the game. "Hopefully we've really sparked something in the country," adds Lo. It remains to be seen whether the German autumn fairy tale can make a difference in the country in the long term. But not only for the team, but also for the fans, the home European Championship full of excitement and spectacle could have been the beginning of an exciting journey. 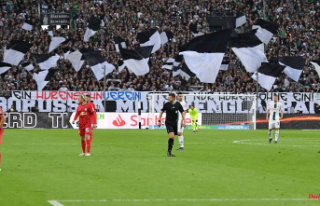