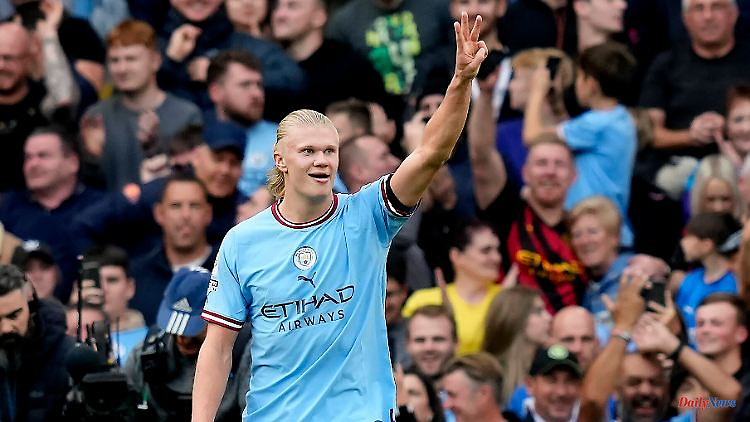 Erling Haaland makes history in Manchester City's thrashing of United as the miracle striker has three feet. Newspapers reckon he will "score 78 league goals". Meanwhile, a sour Cristiano Ronaldo despairs on the bench. A turning point is in full swing.

With Manchester City 4-0 up against city rivals United, Cristiano Ronaldo can warm up on the sidelines. A few minutes later, the superstar has to sit back on the bench with a sour face. At this point, Erling Haaland has already done twice what the Portuguese has stood for for two decades: scoring goals. The Norwegian prodigy striker followed shortly thereafter with his third this Sunday afternoon at the Etihad Stadium. Ronaldo buries his face in his hands outside.

Haaland made history again in the 6: 3 (4: 0) victory of the Citizens. With frightening reliability. He has now scored three hat-tricks in three consecutive home games. Incomprehensible. And a record unprecedented in the English Premier League. Michael Owen, the league's best-ever in that category, needed 48 games for Liverpool FC to score his first three hat-tricks. The former Dortmunder did it in eight games, scoring a total of 14 goals. Where is this supposed to lead? The "Guardian" calculated: "If everything goes well, Haaland will score 78 league goals with his current quota." The newspaper quickly added that it was "of course impossible", but who knows with this Haaland.

While one super striker, Ronaldo, who really wanted to leave United before the season started, was stewing outside on the bench, the other, Haaland, was showered with praise. Whether the sensitive CR7 feared for his records from the sidelines and thought that this 22-year-old Norwegian might one day overtake him as the best born goal machine of modern times has not yet been communicated.

But the handing over of the baton from one goal machine to the next has already happened. Ronaldo is still a very good striker on a good day, but he hasn't been able to decide a big game on his own for a long time like he did in his best days. At some point, the Portuguese's many goal records will not only wobble, but fall. If Haaland continues like this, he might even pulverize them. And so the appearance of the City scorer is not only historic because of his next hat trick. It also heralds a turning point. He becomes a megastar in a team and a whole league peppered with stars. "If Cristiano Ronaldo - you want to know what he was thinking here on the bench - and Lionel Messi were the great players of the millennial generation, then Generation Z in Haaland is experiencing the rise of one of the next true football superstars," writes the "Telegraph" logically.

Haaland's header was long considered his only real weakness. Now he scored his third headed goal in eight league games with a 2-0 win over Manchester United. In these games he scored two goals with his right foot and nine with his strong left foot. Phenomenal statistics, with which the all-rounder Ronaldo otherwise boasted. It's like Haaland has three feet. He even prepared two more goals against his city rivals. Ha(a)lleluja singing by the Skyblues, bad news for their opponents.

The three feet for the sky-blue hallelujah also stand for the entire magic attack: Phil Foden, Kevin De Bruyne, Haaland. Similar to their cinematic role models Bud Spencer and Terence Hill, they make short work of their feet instead of their fists. Youngster Foden scored the second hat-trick of the day against United, director De Bruyne once again magically played Haaland's goal to make it 3-0, as if he could hardly give an assist that wasn't a dream pass. The congenial triumvirate will give City a lot of joy this season. They are currently second in the Premier League behind Team of the Year Arsenal. But with these three miracle feet, those of Haaland and those of the triumvirate, what the Skyblues have been craving for years should succeed anyway: winning the Champions League.

"Just a monster," wrote Haaland's former BVB teammate Mats Hummels on Twitter, "it's good that he's now used to other countries." Of course, the ex-Dortmunder is just as much a meticulous worker and training "monster" as Ronaldo. The two super strikers would never have reached these heights otherwise. But after the success in the city derby, the Norwegian revealed another goal secret that didn't want to come from the world of monsters and mythical animals. Papa Alf-Inge's lasagne helped him achieve a hat-trick series. The ex-City professional prepared the Italian pasta dish before the last three home games, explains Haaland Junior with a smile: "He's probably doing something special in there."

But team manager Pep Guardiola dismissed it and explained the many goals as follows: "He has an incredible instinct in front of goal and knows exactly where the ball is going." The star coach went on to say that with Haaland you just "have this incredible feeling that he always looks hungry and is so competitive. The numbers are scary." This is also reminiscent of Ronaldo, who had caused exactly this amazement among friends and foes for years.

While Haaland inspires fear, CR7 is now suffering like never before in his career. In the end, the Portuguese is not allowed to play a single minute against City, and he only played the full 90 minutes once in the league. A change in winter seems possible. United club legend Roy Keane accordingly railed against coach Erik ten Hag after the derby. "Leaving Ronaldo on the bench is ridiculous for a player of his caliber. He's one of the best players of all time," said the long-time Red Devils captain. "United have shown nothing but disrespect for Ronaldo."

But the turning point that is already taking place cannot stop the 37-year-old Ronaldo at Manchester United or at any other club. After his brace in City's 4-0 win at FC Sevilla in early September, Haaland had already scored 25 goals in his 20 Champions League games so far - no one in the history of the competition has reached this goal faster or younger than the ex-Dortmunder . Another goal against BVB followed in the next premier class game.

In Champions League history there are now only 31 players who have scored more goals than the Norwegian. Of course, Ronaldo is still enthroned at the top with 140 goals in 183 games - but the record will probably not last forever if you look at Haaland's steadily increasing form. On Wednesday (9 p.m.) City will welcome FC Copenhagen in the premier class. If everything goes normally, Erling Haaland will score. With lasagne in your stomach maybe even three times again. With one of his three feet. Ha(a)lleluia.

Round of 16 clap for Switzerland: Without Ronaldo, Portugal hit like unleashed
BREAKING NEWS 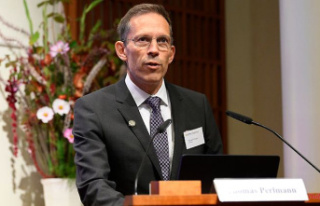