The game between the USA and Iran is the most political so far of this highly political World Cup in Qatar. 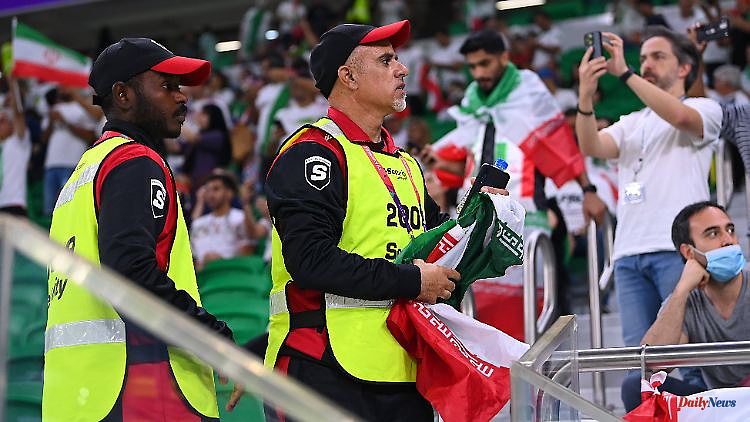 The game between the USA and Iran is the most political so far of this highly political World Cup in Qatar. There is little evidence of the old hatred between the countries on the pitch, but security harasses the fans from Iran in the stands.

Captain America is being looked after in the dressing room, while security guards the stands with eagle eyes. They're always there, but tonight at Al Thumana, they're doing their job with extra care. There are always signals. One pushes into the ranks. With clear words he asks the spectators to finally take their feet off the seats.

With clear gestures, he collects the mostly green horns of the Iranian fans. The noisemakers go in brown paper bags. Proud of their booty, the security descends the stairs of the grandstand. In the half-time break of the politically charged game between the USA and Iran (1-0), a whistle ban must have been issued.

It remains unclear why and who issued this ban on horns so suddenly. Yet the way it's being enforced so suddenly leaves a strange feeling. The fact is: no one had any problems with it, these horns, which spread their noise over the streets around the stadium in Doha's south long before kick-off, were allowed. Now they aren't. At least it gives the appearance of a show of force. We can rule over you, signals the security, who also snatches flags from the hands of other fans in the stadium.

The security is a lot tenser and more present that evening than it already is at this World Cup. If she usually looks towards the field, now numerous eyes are directed towards the spectators. Control every movement, every expression of opinion.

The Iranian protests against Tehran are now also being controlled by the mullahs' regime on the other side of the Persian Gulf. The Iranians can no longer bring their flags, slogans and paintings into the stadium without further ado, as colleague David Needy describes here impressively. And the players of Iran are now singing their anthem again. They hardly move their lips because they too are being watched. Their families are said to have been threatened by Revolutionary Guards in Iran.

Al Thumana is not just about politics, but about progressing to the 2022 World Cup in Qatar. Ironically, in a duel with the nemesis from the United States, whom Iran inflicted one of the most painful defeats in the tournament's history 24 years ago at the 1998 World Cup in France.

The USA had dutifully contributed their part to this most political duel of the World Cup. From allegations by ex-coach Jürgen Klinsmann to a social media post showing Iran's flag without the Islamic Republic's logo, drawing the wrath of Tehran, to a charged, bizarre press conference in which Iranian journalists described US coaches Grill Gregg Berhalter. And that before a game of immense importance for the USA, hosts of the 2026 World Cup. Only a win will bring them into the knockout phase, there is also unrest around Dortmund's Gio Reyna. He messed up on the bench and not everyone wants to understand that.

When the game begins, everything on the pitch is forgotten. It's not a good game. The USA control the action and after a wonderful combination they take a deserved lead down the right flank. The ball travels from captain Tyler Adams to Weston McKennie and from there onto the wing to Sergino Dest. Pulisic lurks in the middle, scoring and injuring himself as befits a true US hero. In the second half, the Americans defended their lead. round of 16 Now against the Netherlands. "Iran, Iran, Iran" echoes from the stands. For a moment, football unites the protesters and their pursuers. It is not enough. Iran is eliminated.

"The football gods bless those who score goals," said Iran's coach Carlos Queiroz after the World Cup: "We didn't score." On the other hand, they celebrate goal scorer Christian Pulisic. He doesn't make it out of the half-time break after his goal. He sustained a stomach injury when he scored. "We're grateful to him for throwing himself into the ball," said US star Weston McKennie, who wore US colors in his hair in Qatar. "We were able to talk to him. He's in good spirits," said Coach Berhalter. Pulisic is taken to the hospital and diagnosed with a contused pelvis.

On the pitch, Antonee Robinson hugs a tearful Ramin Rezaeian. He feels his opponent's pain and yet he can hardly imagine what is going on in the Iranian's mind. It's one of the moments of the previous World Cup. Football can overcome everything. This statement is still true, no matter how much FIFA casts doubt on it with its sell-out of all values. As much as the signs made on the pitch are dwarfed by the events in and around the stadium.

There were further incidents in the grandstand between security and the fans, from whom posters were snatched. But one group simply brought letters with them. They make "Masha Amini". Security also watches every movement of the fans in the stands behind the goal. On one occasion, writes author James Montague, they storm in and snatch a paper sign with the name Mahsa Amini from someone.

Danish reporter Rasmus Tantholdt published shocking images of injured Iranian fans after the game. They were attacked by regime thugs under the eyes of the local police. He reports that the authorities arrested him for a short time and asked him to delete his recordings. He didn't do that.

1 Balanta was only 22 years old: a professional footballer... 2 Father was in need of care for years: man fails with... 3 "It's crazy": Pediatricians: "Cold... 4 Three million more since 2014: Refugees are making... 5 From South Korea to New Zealand: children's corpses... 6 First Lady introduces decorations: It's Christmas... 7 Shipping, service, prices: This is the best parcel... 8 Many against one: when a print termination is permissible 9 Verdicts: Online Casinos Illegal: Players Get Money... 10 Thuringia: 84-year-old dies in a house fire in Bad... 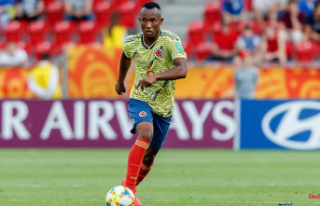 Balanta was only 22 years old: a professional footballer...