The Vikings were already installed in America in the year 1021

More than a thousand years ago a group of settlers from Northern Europe reached the coasts of the island of Newfoundland, in a place called today L'Anse Aux Me 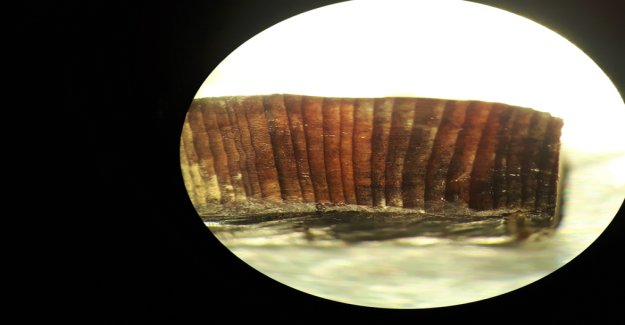 More than a thousand years ago a group of settlers from Northern Europe reached the coasts of the island of Newfoundland, in a place called today L'Anse Aux Meadows. There, the remains of a Nordic town suppose the first test of the European presence in America, 500 years before the Spanish caravels crossed the Atlantic. Recognized as a World Heritage Site by UNESCO, the settlement could correspond to the legendary country of Vinland, founded by Explorer Leif Erikson at the end of the first millennium of our era. Now, a new dating by radiocarbon confirms the presence of objects belonging to the Vikings in the year 1021.

The study, published this week in the journal Nature, analyzes wood remains used by the ancient inhabitants of L'Anse Aux Meadows. Each of them presents cutting marks made with metal blades, a material that did not produce indigenous populations. Specifically, three logs, coming from three different trees, were found in contexts attributable to the Vikings. "When these deposits are excavated, we are meticulously all the material remains: wood, stone, metal modified by man, fibers, seeds, etc.", explains Margot Kuitem, researcher at the University of Groningen and first author of the article. "In this case there are superimposed layers; in the lowest there are evidence of indigenous presence, above there are remains that can be attributed to the Vikings (where wood has been found) and on top of these are new materials consistent with the Indigenous villages".

In addition, scientists have been able to determine exactly the year with the help of a singular phenomenon occurred at 992 D.C., a solar storm that left a visible radiocarbon signal in the rings of all the trees in the world. "There is a clear increase in radiocarbon production between 992 and 993 D.C.", affirms the associate professor at the University of Groningen Michael Dee, director of research. "The three wooden objects presented this signal, followed by 29 growth rings (one for each year) before the edge of the crust". Those rings allow the authors to deduce that they were carved 29 years after the storm.

The number of Viking expeditions is unknown to America or the duration of your stay on the other side of the Atlantic, but the current data leads to think that it was a short company, perhaps a few decades. "From a scientific point of view, all we can say is what appears in our study: that the three objects have the same date," Kuitem recognizes. "However, from the archaeological point of view, we have also obtained other tracks: the piles of garbage (we call Conhermen) of the site were much smaller than similar ones found in Viking deposits of Greenland and Iceland." The researcher adds that there is no evidence that no Viking burial was celebrated in the field. "All that has convinced most archaeologists that the deposit was not occupied for a long time."

L'Anse Aux Meadows consists of eight wooden structures built in the same style as others found in Greenland and Iceland at the same time. The buildings include three homes, a forge and four workshops, located in a narrow terrace overlooking a peat and a small stream near the bank of the Epaves Bay, in the Strait of Belle Isle. The researchers believe that at the end of the tenth century, the area was exuberant and wooded, although today it is rather a prairie whipped by the wind. The objects found in the field show signs of activities such as iron production and work of wood, probably used for ship repair (the crakkars). Some botanical evidence collected in the settlement confirm that the Vikings also explored lands further southern Terranova.

The remains found in Newfoundland coincide with some of the stories of the Greenlande saga and Erik El Red's saga, collectively known as Sagas de Vinlandia. It is the narrative of Leif Erikson trips and other explorers who ventured west through the Atlantic Ocean from Iceland and Greenland, to search and explore new territories. Specifically, some researchers believe that the settlement of L'Anse aux Meadows could correspond to the Straumfjord Fjord where, according to these stories, another Viking explorer, Thorfinn Karlsefni, established a temporary settlement.

Although contradictory-and often fantastic - the sagas suggest that encounters, both violent and friendly, among the Vikings and the indigenous peoples of the region (who called Skrælings) were produced. However, for the time being, few archaeological tests have been found that support these exchanges. In any case, the article that appears now establishes the year 1021 D.C. As the oldest one in which the European presence on the continent can be scientifically demonstrated.

1 The first novel of Saramago, unpublished so far in... 2 Pedro Sánchez says Rotundo that will not take 200... 3 Pedro Sánchez supports the fusion between the Extremian... 4 The CT rejects annuling the preamble of the law that... 5 Today's news, October 20 | Last hour of today, live 6 The man who received her home runs to two policemen... 7 Hit the violent band Blood: They fall their dome and... 8 The PP accuses the collaborators of Pedro Sánchez... 9 PP, citizens and Vox claim before the Electoral Board... 10 Interior refresh the asylum to 'El Chicken' carvajal The first novel of Saramago, unpublished so far in...