There was a time when the Moon also had volcanic eruptions like the one we are seeing now in La Palma. Scientists already knew it but now, the analysis of the 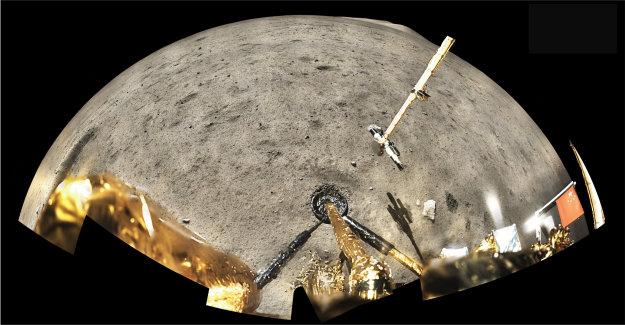 There was a time when the Moon also had volcanic eruptions like the one we are seeing now in La Palma. Scientists already knew it but now, the analysis of the rocks that a robotic Chinese ship brought last December has revealed that our satellite had volcanic activity for longer than it was thought.

The discovery made thanks to these rocks collected by the Chang'e-5 mission - the first ones that are collected on the Moon since 1972, when the US Apolo program ended - also shows how much it remains to be discovered on our satellite. Only USA, the USSR and recently Chinese have managed to bring samples to Earth for analysis.

As the authors of this Chinese investigation explain in Science magazine, the basalt recovered in the moonlife of the robotic ship has about 2,000 million years old (1,963 million years exactly). What is in that area known as Oceanus Procellarum are the lavas that once flowed from the volcanoes, and that with the passage of time cooled and solidified, as can be seen in multiple places of the Canary Islands and in many others The land that has suffered volcanic activity in the past.

"So far it was thought that Lunar Volcanism had been older and ceased long before, these new data indicate that it is necessary to revise (and revisit) the processes that may have caused this greater longevity of primary volcanus or, perhaps, could have been More emission pulses that rejuvenates surfaces, "explains the planetary geologist Jesús Martínez Frias, head of the research group of meteorites and planetary geosciences of the CSIC and founder of the Spanish network of Planetology and Astrobiology.

By bringing rocks to Earth, the team led by Xiaocha Che, from the Geology Institute of the Chinese Academy of Geological Sciences, has been able to analyze its isotopes accurately and estimate both its antiquity and its composition. In this study, show the results of the study of two of these basaltic fragments that they support, were formed from the magma that spranged 2,000 million years ago, a time after that of other lunar rashes whose traces have been found in other areas of the surface.

How were those lunar rashes? "My impression is that the large seas of lava had to be really spectacular (there are still many polka dot structures, such as domes, castings, sinuous rilles, etc). It was a volcanism more associated with the enormous impacts. On Earth we have more Energy (geological vitality) and therefore we also observe a greater geodiversity in both volcanic buildings, and in the petrology and geochemistry of their magmas, as well as in the active geodynamics that continues at present (as we see, for example in La Palma) " , explains the author of the Birmingham key.

"The truth is that the moon is giving us surprises in many ways, with the processes of superficial oxidation, the metal mass under the south pole, the different types of water (in the form of ice) and now with the younger ages of the volcanism . The variation of the age of the volcanism is not completely surprising, but it does forces us to restructure geological schemes over our satellite and its endogenous and superficial processes, "says this planetary geologist.

On other planets and bodies of the Solar System, remember Martínez Frías, there is also evidence that there is or volcanic activity: "We have seen it in Mars, Venus, Ceres, Pluto ...", says.

On the Moon there are also earthquakes, or rather this earthquakes (the moonquakes) although as Martínez Colds clarifies, "they are not exactly as land, but are more associated with the joint vibration of lunar monoplach due to different processes, both endogenous and Exogenos (eg Impact of objects / meteoroids) ".

The NASA Perseverance Rover continues to work on Mars and scientists, analyzing from Earth the samples and images it takes. This Thursday, a team has confirmed that the Jezero crater in which the robot works, housed 3,700 million years ago, when the Martian climate was warm and humid.

The footprints of the old Delta are visible in the different geological layers of the area where Perseverance landed last February.

The team, led by Nicolas Mangold and Sanjeev Gupta have calculated how the flow of the old river was varying over time. In the lower part of the cliff they have identified layers that are especially promising for the investigation of perseverance because if there was ever life in Mars, as believed, those clay-type rocks could preserve traces that demonstrate it.

1 WHO and UN urge developed countries to derive remnants... 2 The lack of diagnostic tests condemns half of the... 3 Gregorio Marañon Hospital alerts parents before the... 4 Mark Z. Jacobson: Spain can be 100% renewable in 2035 5 Spain: A step from low risk, but with 57 deaths more 6 The government stops meeting weekly with the CCAA... 7 Who will receive the third dose, when and with what... 8 WHO approves the use of malaria vaccine in children 9 'Mercenarian' bacteria to fight resistant infections 10 Chemistry Nobel for parents of a technique to create... WHO and UN urge developed countries to derive remnants...