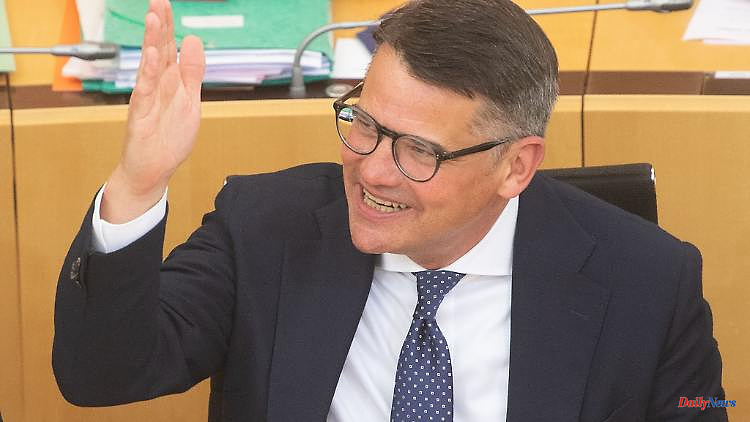 Hesse has a new head of government, the Frankfurt-born CDU politician and former state parliament president Boris Rhein. Immediately after his election, Volker Bouffier's successor will fill the Ministry of Justice.

Wiesbaden (dpa/lhe) - With more than the necessary votes, the CDU politician Boris Rhein was elected to succeed Volker Bouffier as Prime Minister of Hesse. The 50-year-old received 74 yes votes in a secret ballot in the first round of voting in the state parliament in Wiesbaden on Tuesday - and thus also approval from the opposition. Christian Democrats and Greens have 69 seats in Parliament, a wafer-thin majority of one vote. The election was therefore eagerly awaited.

The Rhine, which is considered conservative, was previously President of the Hessian state parliament. After his election, Rhein thanked the deputies for the "overwhelming trust" to applause. He declared that he wanted to be Prime Minister of all Hessians and offered the opposition fair cooperation.

He takes office at a confusing time and with respect. "There are many indications that we will be accompanied by critical developments in the next few years, the extent and effects of which we may not even be able to fully appreciate," said the new head of government.

The next state elections will take place in Hesse next autumn. With a view to this important event, the state CDU decided to change personnel at the head of the state government.

Bouffier resigned on Tuesday after almost twelve years at the head of the Hessian state government. The 70-year-old was the longest-serving Prime Minister in Germany, and he had already announced his retirement in February. In the state parliament, Bouffier said goodbye with a short speech, to which the deputies responded with standing applause.

Up to now, Rhein's career has been characterized by ups and downs. At the age of 27 he was first elected to the Hessian state parliament, and at the age of 38 he took over the office of the Hessian Minister of the Interior. In the run-off election for the office of mayor in his hometown of Frankfurt in 2012, he surprisingly lost to SPD man Peter Feldmann. In 2014, Rhein was appointed Minister of Science in the black-green state government. The married Catholic and father of two has been President of the State Parliament since January 2019. In the office, he has earned respect across factions, including with committed action against racism, anti-Semitism and right-wing extremism.

The first change came with the appointment of the ministers: the 52-year-old former President of the State Court of Justice and the Frankfurt Higher Regional Court (OLG), Roman Poseck, replaced the previous Justice Minister Eva Kühne-Hörmann (CDU). The opposition holds Kühne-Hörmann responsible, among other things, for a delayed introduction of the e-file and the great shortage of staff in the Hessian judiciary.

In addition, the 48-year-old lawyer Tanja Eichner will become the new State Secretary in the Ministry of Justice. State parliament spokesman Tobias Rösmann (44) is planned as the new government spokesman and successor to Michael Bußer.

There had long been speculation about a possible cabinet reshuffle on the CDU side. With a view to the state elections in autumn 2023, it was considered likely that Rhein would want to make a name for himself in his government team with a breath of fresh air.

In addition to the prime minister, the CDU is represented in the government with seven ministers and the Greens with four. The smaller coalition partner had already let it be known that he saw no need for changes in the department heads. The cabinet wanted to meet in the State Chancellery on Tuesday.

The opposition congratulated Rhein, but otherwise reacted critically. SPD faction leader Günter Rudolph said there was no trace of a spirit of optimism. Rhein promised to make the government younger and more female, which is not happening. Apart from the overdue change in the Ministry of Justice, the prime minister decided to "continue with the old problem cases at the cabinet table."

The FDP demanded that Rhein must lead Hesse out of mediocrity. "Bouffier left Rhein some construction sites that cannot wait - from the lack of a climate protection strategy to a neglected economy to digitization," said parliamentary group leader René Rock. The AfD gave Rhein 100 days before making an initial judgment. The left called for a socio-ecological awakening for Hesse and a real change in policy. 23 years of CDU government are enough.

Astrid Wallmann was elected head of the Hessian parliament as Rhein's successor; she is the first woman to hold this office in Hesse. After the election, Wallmann thanked the MPs for their trust and said she was very much looking forward to the new task. Wallmann is the daughter of Wiesbaden Mayor Wilhelm Wallmann and niece of the former Prime Minister of Hesse, Walter Wallmann. 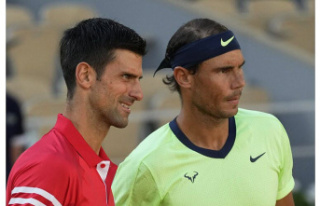 Tennis. Roland-Garros: How to view the Djokovic-Nadal...