The bombing of Mariupol's theater was 'clearly Russian war crime', but there were fewer casualties than anticipated

According to Amnesty International's Thursday, June 30, report, the bombing of Mariupol, Ukraine on March 16, in which many civilians sought refuge, was "clearly" a Russian war crime.

According to Amnesty International's Thursday, June 30, report, the bombing of Mariupol, Ukraine on March 16, in which many civilians sought refuge, was "clearly" a Russian war crime. However, the actual number of victims is much lower than expected.

"Previously, we were talking only about an alleged war criminal. We can now clearly state that it was an alleged war crime, which was committed by the Russian armed force," Oksana Potkaltchouk, director of AI in Ukraine, said to AFP in a Paris interview.

The theater was destroyed by two explosions. They were caused by "something very large: two 500kg bombs" that had been dropped from an "air strike". Experts consulted by NGO experts said the damage was severe and the cause of the destruction contradicted the theory of an explosion at the site by the Ukrainian forces. Oksana pokaltchouk explained that at the time Mariupol's sky was "under Russian control" but there were no Ukrainian planes.

Satellite images before and after the attack showed that there was no Ukrainian military presence near the theater, she stated. She lamented that "when there were so many military targets (the Russians chose a civilian target."

Amnesty condemns the "deliberate" attack against a site that houses hundreds of innocent people. In front of it, the word "child", written in large white letters in large, was placed, making it "clearly, a war crime."

The report's only positive news is that the death toll would be lower than originally estimated. Mariupol reported about 300 deaths.

"Amnesty International believes at least 12 people died in this attack, and probably many more, as well as many more were severely injured," says the report. It was compiled using testimony from 50 witnesses and many experts.

The NGO acknowledges that "this estimate is lower than other counts". She explains that it is based on the fact many theater refugees had fled Mariupol in the days preceding the attack and that most of the survivors were trapped in basements or other explosion-protected areas.

"It is good that fewer people were killed. Oksana pokaltchouk says that this doesn't alter anything about the merits. To reiterate: regardless of how many casualties were sustained, the attack on Mariupol's theater was "clearly" a war crime. 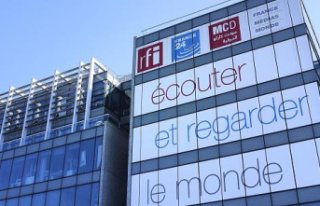 Strike of the public media: What is the audiovisual...