The United States reacted to the aggressive wars in Ukraine with sanctions against individual Russians - now Moscow is paying back in the same coin. 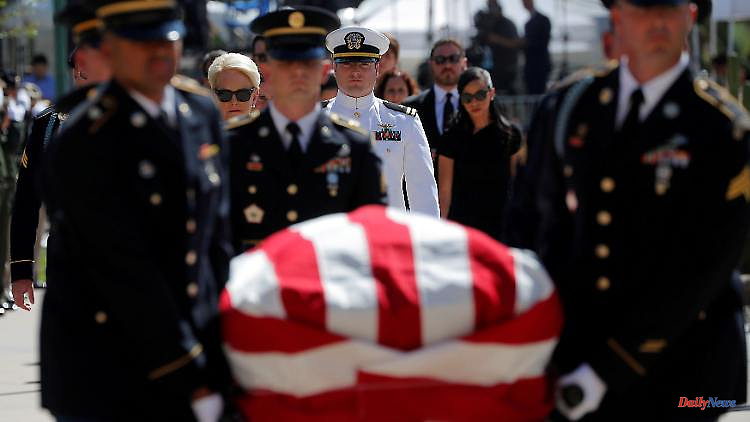 The United States reacted to the aggressive wars in Ukraine with sanctions against individual Russians - now Moscow is paying back in the same coin. More than 960 US citizens are denied entry to Russia, among other things. Including three dead former US senators.

Russia has imposed travel bans on more US citizens. The Foreign Ministry in Moscow published a list of 963 names, including Hollywood star Morgan Freeman. Moscow accuses him of having published a video in 2017 in which he accuses Russia of a "plot" against the USA. Also included are the names of US President Joe Biden, Secretary of State Antony Blinken and Secretary of Defense Lloyd Austin, and Mark Zuckerberg, head of digital company Meta.

It is curious that former US Senator John McCain is also on the list - he died in 2018. Former Senators Harry M. Reid and Orrin G. Hatch, listed by Russia, have also passed away. Reid died in December aged 82 and Hatch died in April aged 88.

The absence of an important US politician is also noticeable: Donald Trump. Mike Pompeo is the only member of his previous government on the list. In addition, there are numerous loyal Trump supporters such as Republican Senator Ted Cruz or MP Marjorie Taylor Greene. At the same time, according to an evaluation by the Washington Post, none of the US media representatives from the conservative news channel Fox News are on the list - but there are representatives from other US media such as CNN or the New York Times.

Russia had already announced entry bans against these and numerous other prominent US citizens a month ago. The sanctions are a reaction by Russia to the entry bans imposed by the USA due to the Russian offensive in Ukraine. The list, published on the Russian Foreign Ministry's website, contains the names of government officials and members of parliament, but also members of civil society.

1 Defying a deficit and a man down: RB Leipzig wins... 2 Cup off, further, scorer: The man who lost the cup... 3 Offer for wind power subsidiary: Siemens wants to... 4 Checking out the historic final: There are tears on... 5 The historic final in check: There are tears on the... 6 Several countries report cases: Berlin expects further... 7 "Build up political pressure": Ex-ambassador... 8 Captured Putin confidant: Azov fighters could be swapped... 9 The night of the war at a glance: Zelenskyj calls... 10 "Don't cross the border": Kubicki warns... Defying a deficit and a man down: RB Leipzig wins...