"Silently over the water": Efoils are becoming a trend in Germany

A new wave of fashion is sweeping water sports: Efoils. 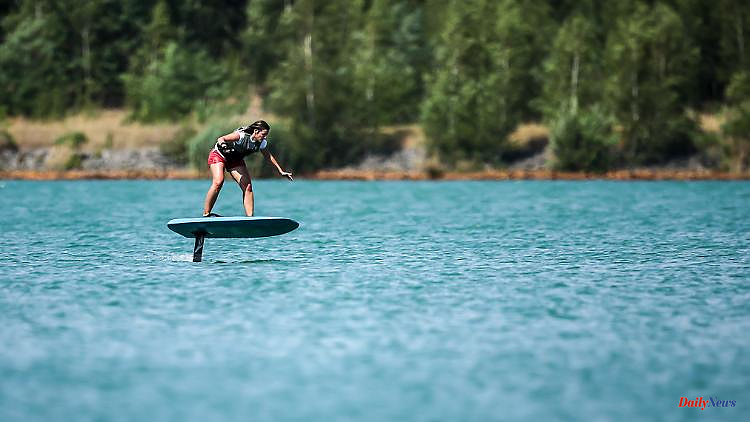 A new wave of fashion is sweeping water sports: Efoils. The sleek devices are also in demand in Germany. With the help of small electric motors, users can glide smoothly over the water. In Saxony, however, this is seen as a danger.

From afar it looks a bit like Vivian Hemmann is flying on the water from the shore. Her efoil slowly lifts a few centimeters out of the Störmthaler See near Leipzig - and after about an hour of practice, the 34-year-old is almost upright on her board. In the knee-deep water near the shore, many bathers watch in fascination.

"Once you get the hang of it, your strength decreases a bit," says Hemmann after her first attempt. Next to her is an approximately 1.60 meter long board with a large fin on the underside - the so-called efoil. It is powered by an electric motor and batteries. Together with the hydrofoil under the board, they ensure that it rises up to 80 centimeters above the water at a certain speed. A growing trend from the point of view of water sports enthusiasts.

"They are a game changer. I think the topic will become big," says efoil supplier Stefan Pohl from "Hydrofil.de" in Berlin. His team operates stations at Wannsee in Berlin, at Müggelsee and on Rügen. There, people can learn how to ride the Efoil in courses or even buy a board.

"We gave over 700 training courses last year, we can easily double that this year," says Pohl. Eight out of ten students could already be flying on the water after about an hour. With a remote control, they can control the speed up to a maximum of around 50 kilometers per hour. According to Pohl, the Efoils are quiet compared to other water sports such as jet skis, athletes do not have to wait for the right wind or good waves.

Sven Hamelmann from Würzburg sees it similarly. He is the owner of the company "Efoil Riders" and discovered the electrically powered board while on vacation in New Zealand. In Germany he operates stations in Würzburg, Munich, on Lake Starnberg, Berlin, Frankfurt and Bremerhaven. In addition to courses, like Stefan Pohl, he also offers the devices for sale. "I was so fascinated by it, you float noiselessly over the water. It's totally addictive," says Hamelmann.

The trick to getting the board off the ground: shifting your body weight. "You only concentrate on the body. It's a marginal movement whether I go up in the air or not," explains the Würzburger. In addition, no fuel flows into the lake, which makes the Efoil more sustainable. In North Rhine-Westphalia, too, the provider Frank Köhler from "efun Europe" reports an increasing demand. He has customers in Krefeld, Cologne or Düsseldorf who are interested in buying an efoil, says Köhler. Nevertheless, there are still many people who say: "I've never seen that before."

However, the overall growing awareness is not only met with fascination. In Saxony, foils - i.e. the fins on the underside of a board - have been banned on the lakes in general. This includes the efoil. There is a risk of danger with the horizontally guided wings under water, "since they are not visible to other users in the vicinity and can therefore be dangerous. The speeds that can be achieved are also higher," says a spokesman for the Ministry of Transport.

So far there are no uniform regulations in Germany. In Bavaria, for example, according to a ministry spokesman, electrically powered watercraft do not require registration, but require approval.

Efoils are allowed on inland waterways - for example large rivers such as the Rhine and the Danube - as a spokeswoman for the Federal Waterways and Shipping Administration explains. The Saxon authorities commissioned a study to investigate the potential danger of the wings in more detail. With a special permit, surfers are allowed to use foils in Saxony, the spokesman explains.

Rüdiger Pusch, who is leading efoil courses at Störmthaler See in the second season, got one of these. Here, too, the demand is definitely there. But: "It won't be a mass product," thinks Pusch. Especially when buying an efoil, people with around 15,000 euros would have to spend a lot of money. Depending on the provider, courses cost around 200 euros.

The course instructor is critical of the ban imposed by the Saxon authorities: "You have to be careful. But you can set a few rules." The chairman of the Association of German Water Sports Schools, Thomas Weinhardt, considers the state's arguments to be weak. Foil sports are not without danger.

But other water sports without foils are also allowed, which are much faster and no less dangerous. A compromise could be to mark out fixed areas or time periods for athletes on the lakes. In any case, Vivian Hemmann is convinced of the Efoil and is certain: "Now you have to try it a second time."

1 Child with a German man: Leona Lewis has become a... 2 Man, animal, bike: This is how cycling with a dog... 3 Hares and ptarmigan too: the Neanderthal diet was... 4 Researchers find cause: hair loss before healing?... 5 North Rhine-Westphalia: Coach Boris: Game against... 6 Baden-Württemberg: New edition of the rule of law... 7 Saxony: Procedures too long: Suspects released from... 8 Baden-Württemberg: Hugo Boss doubles earnings to... 9 Seven reasons why Putin is no longer making progress 10 Interview with former chancellor: Gerhard Schröder... 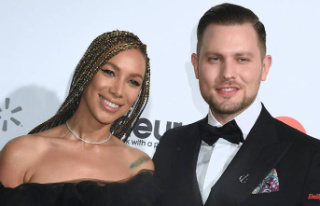 Child with a German man: Leona Lewis has become a...