DBB team is defeated in the thriller: The German dream of EM gold has burst

Germany and world champion Spain deliver a thriller in the semi-finals of the European Basketball Championship, in the end there is a bitter end for the DBB team. 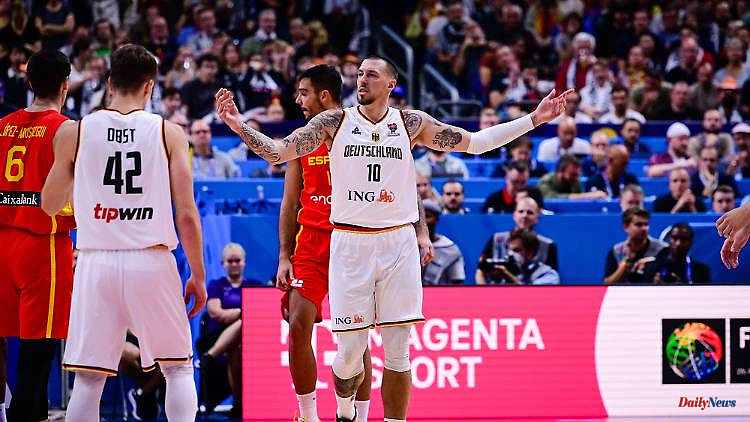 Germany and world champion Spain deliver a thriller in the semi-finals of the European Basketball Championship, in the end there is a bitter end for the DBB team. Before the last quarter Germany leads, but in the final phase the game tilts. The DBB team is now playing in the bronze game for their first medal since 2005.

The outstanding Dennis Schröder immediately tried to comfort his teammates, and legend Dirk Nowitzki also gave encouraging words. Despite another impressive performance, the German basketball players narrowly missed their first European Championship final in 17 years, the dream of gold is over. The team around the excellent Schröder had to admit defeat against world champion Spain with 91:96 (51:46). The chance for the first medal since silver in 2005 is still there.

"We definitely could have won that. We lost our position. The Spaniards were really tough and played very well," said Schröder, who offered an impressive performance with 30 points. "The tournament is not over, we have one game left." The option for a medal is still there. Spectators and tournament ambassador Nowitzki also sent a direct message via Twitter: "Don't let your head down, boys! Get bronze!" In the game for third place, Germany can still win a medal against Poland on Sunday (5:15 p.m. / RTL and Magentasport). The final will be contested in the evening (8.30 p.m.) by Olympic silver medalists France and Spain. The French had outclassed outsiders Poland in the first semi-final with 95:54 (34:18).

"We have to sort ourselves out and be ready again on Sunday," said national coach Gordon Herbert. The defense against Spain was "not good enough". Even a basketball gala by Schröder could not prevent the unfortunate defeat. One day after his 29th birthday, the captain showed the best international performance of his career and was clearly the best thrower in his team. "Every game you lose hurts, of course. Especially at home. But that's how it is in sport. That's part of it and it will make us better," said Franz Wagner.

In the end, despite prominent support in the hall, it wasn't enough. The presence of Foreign Minister Annalena Baerbock was of no use either. "Great, the atmosphere is unbelievable. All of Germany is rooting for it. It's unique here in the hall," said Baerbock during the half-time break. "The fact that the German team has come this far is a real boost of motivation for everyone in the country in these times," added the Greens politician. Now it is up to Schröder and Co. to shake off their disappointment in order to fulfill their dream of a medal against Poland.

Germany versus Spain - these have always been very special duels in the past. In 2001 it was about the bronze medal, in 2005 a place in the final, in 2015 the end of Dirk Nowitzki in the national jersey and in 2017 a semi-final ticket. The games against Spain were always something special for the German basketball legend Nowitzki in particular. In 2001, his best 43 points in the match for third place in the European Championship was not enough for bronze. Four years later, the Würzburg native played the full 40 minutes in the semifinals and decided the game with a shot a few seconds before the end.

This time Nowitzki cheered on from the stands. "We're a bit of a favorite today, that's a different role, a bit harder sometimes, but I think the guys still do it ripped off," said Nowitzki before the game on RTL, which played the game like the quarterfinals against Greece broadcast at prime time on free TV.

And indeed, the German team didn't show any nervousness at first. Driven by the outstanding Schröder, Germany attacked the Greece game in the quarter-finals. One day after his 29th birthday, the point guard scored nine points in the first quarter and skilfully put his teammates in the limelight again and again. For example, Daniel Theis with a high pass, which the center converted to 16:16 with a crashing dunk. After the first quarter, the German team was still three points behind because they could not defend themselves. In addition, the three did not fall as high percentage as against the Greeks. In the second period, Germany went 3:20 minutes without a point, while Spain pulled away to nine points.

But then Schröder took control again and pushed his teammates forward. With a 14-0 run, Schröder and Andreas Obst turned the game around with two threes. At the break, Germany was five points ahead, with 14,073 spectators raging in the sold-out Mercedes-Benz Arena. "There is no one who can stop Dennis with that speed," Maodo Lo praised the German captain at the break.

After the change of sides, the momentum was gone for a short time. With ten points in a row, Spain took the lead again. This time it was Franz Wagner who put Germany back on track with five points. 14 points in a row gave the Herbert team a ten-point lead. The last quarter was also spectacular, but the ripped-off world champion fought back again and crowned his comeback in the end. "The start of the fourth quarter really hurt us. They're a very good basketball team, they deserve it," praised Germany's head coach Herbert.

1 Eintracht and Bayern with a draw: A record but no... 2 Eintracht scores important points: Hannover 96 climbs... 3 Comeback after baby break forbidden: Olympic champion... 4 "Nothing to it" about allegations ?: HSV... 5 Buschi and Schmiso on EM cracker: "This is how... 6 Records, TV times, hopes: Kick for the Bundesliga:... 7 "We are in a dilemma": IOC thinks about... 8 No magic wand against the crisis: the German rowing... 9 Excitement about Seidenberg: doping shadow weighs... 10 Anyomi on the start of the Bundesliga: "The hype... 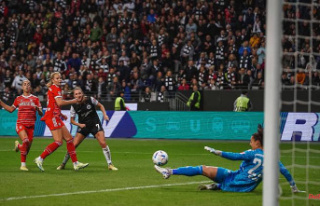 Eintracht and Bayern with a draw: A record but no...