From centimeters to the post: Denmark disappointed in a draw without luck and goalless

The Danish national team gets a setback at the start of the soccer World Cup: against Tunisia, the Scandinavians cannot get the ball over the line even from the shortest distance. 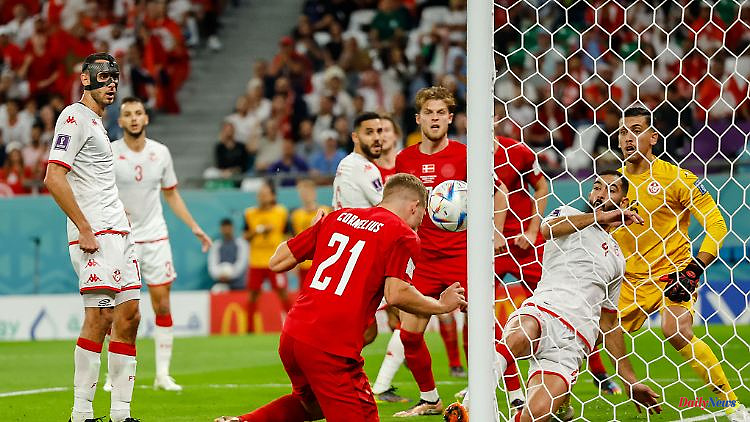 The Danish national team gets a setback at the start of the soccer World Cup: against Tunisia, the Scandinavians cannot get the ball over the line even from the shortest distance. So only one point remains - with which Tunisia can be quite satisfied.

The World Cup insider tip Denmark has not yet fulfilled the high expectations in its first tournament game. The semi-finalists at the World Cup in Qatar struggled to draw 0-0 against the loudly supported outsider Tunisia. It wasn't until the second half that the Danes even had chances to score. However, her performance in Al-Rajjan remained thin. In stoppage time, a possible penalty for Denmark was considered but not awarded.

Denmark's star Christian Eriksen made his first major tournament appearance 17 months after collapsing at Euro 2021. However, the Tunisians paid no heed to this moment, which was so emotional for him. Midfielder Aissa Laidouni tackled the Manchester United playmaker on the touchline in the first minute and celebrated the move with a cheering gesture towards the crowd.

Tens of thousands of Tunisian fans sat there - well over half of the 42,925 spectators in Education City Stadium loudly supported the North Africans. Teams from the Arab world like Tunisia or Morocco have a big advantage at this World Cup. Their followers flew from their homeland to Qatar or are already living there as guest workers.

And this massive home game atmosphere intimidated the Danes noticeably, although their goalkeeper Kasper Schmeichel had said the day before: "We know something like that. It's not a problem for us." In fact, however, the clearly favored Danes would rather play the safety pass if, with a little more risk, significantly larger spaces would have opened up. And they kept getting stuck in the attacking third because their game lacked any pace. Coach Kasper Hjulmand reacted to this sluggish presentation by changing tactics twice in the first 65 minutes alone.

For at least half of the time, Tunisia was much more grippy, purposeful - and more dangerous. A goal from centre-forward Issam Jebali was disallowed for offside in the 23rd minute. 20 minutes later, the attacker from Danish club Odense BK was saved by goalkeeper Schmeichel (43'). The Danes increased their pressure in the second half and made it difficult for their opponents to defend themselves. A goal by Andreas Skov Olsen in the 55th minute was also ruled out for offside. In addition, Eriksen failed with a long-range shot by Tunisia goalkeeper Aymen Dahmen (69th). And Andreas Cornelius, who had just come on as a substitute, only headed against the post from a very short distance (70').

And so this World Cup started with a disappointment for the Danes, also from a sporting point of view. Like all other European colleagues, captain Simon Kjaer did not wear a captain's armband, which is intended to promote tolerance and diversity. Even the training shirts with the inscription "Human rights for all" had been banned by FIFA before they arrived in Qatar. The only expression of protest was an almost monochromatic jersey, on which the logos of the association and the manufacturer can hardly be seen. The Danish outfitter wants to be "unseen" at this World Cup. 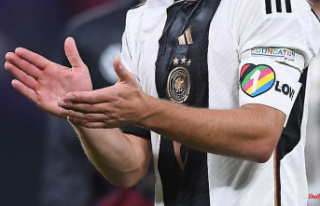 Protection for the entire World Cup ?: DFB is apparently...