Mané without luck, Tel as a solution?: A goal would do FC Bayern's game good

The result crisis in the Bundesliga reaches FC Bayern at the wrong time. 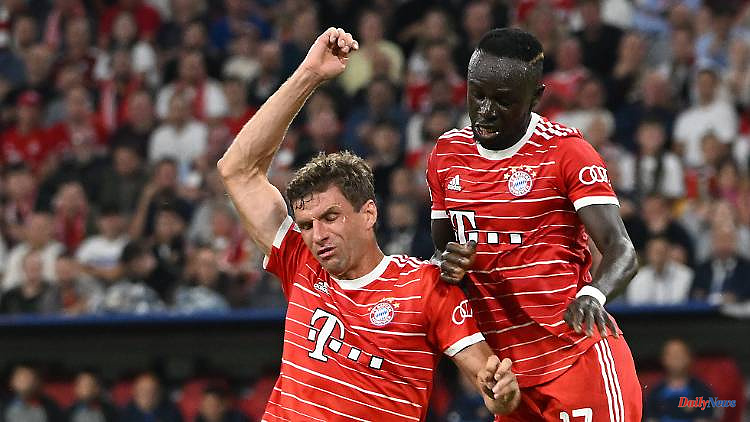 The result crisis in the Bundesliga reaches FC Bayern at the wrong time. Because the club is now dragging the search for a solution into the international break as well as the discussion about a real centre-forward. But what can the coach do?

A goal would be good for Bayern's game. It probably even has to mean: A few goals per game would do FC Bayern good. Because if trainer Julian Nagelsmann's team worked a little better with the degree these days, there would be less of a crisis now. It had long been announced publicly and was now no longer talked away internally after the 0-1 draw at FC Augsburg. The coach was so touched by the winless series in the Bundesliga that he would like to reconsider everything in the upcoming Nations League break. One can assume that the system question is part of it.

It's all about whether it can be a sustainably successful idea NOT to put the burden of FC Bayern's offensive game into the hands, pardon me, feet of a center forward. Actually, it's a very idle discussion. Because the Munich makers made a conscious decision to interpret the role of a real nine differently. variable. They accepted the fact that the topic of Robert Lewandowski could hit them painfully. Now it's just a matter of moderating the matter well.

Stupid for FC Bayern is the moment when the big Lewandowski gala at FC Barcelona collides with the big show of harmlessness by Sadio Mané and his fellow storm troopers. Ironically, before the international break, the critical heckling accumulates. Perhaps the much-praised squad restructuring wasn't as good as expected after all? At the record champions, the wheel of debate between euphoria and admiration, between criticism and ridicule, turns faster than at any other Bundesliga location. The fact that they occasionally overdo it, well, that's not breaking news for the empire on Säbener Straße. Nevertheless, one may sometimes wonder about the excesses. Which of the things between "doubts from the dressing room about the coach" to "restlessness from his new girlfriend" is right and important, who knows?

But in the past decades they always had a solution: Uli Hoeneß. FC Bayern's bodyguard brushed aside any discussion, making himself and his verbal attacks a national issue if necessary, thereby drawing attention away from the actual problems. No matter in which dimension they revealed themselves. But the power of Tegernsee has withdrawn and only appears in very small doses. When it really burns again. As with the then unresolved alternating theater around Lewandowski. If and when a powerful word will be spoken about autumn frustration? Not clear. But the more Nagelsmann is counted publicly, the more the topic "Thomas Tuchel" is fueled, the more likely greetings from Tegernsee are.

Currently, however, Coach Nagelsmann is alone in the wind. At least felt. While the bosses emphasize that there is no doubt about the coach, they also say again and again that he has a great squad at his disposal, one that should win titles. must win. It's not just a big squad in which there will be player dissatisfaction with lack of playing time, but also one that the 35-year-old envisions. So even without a classic centre-forward.

Which of course is not entirely correct. Because Mathy's Tel is there. The 17-year-old Frenchman was signed from Stade Rennes for around 20 million euros. A very powerful investment, created for the future. Not for the present. In the meantime, Harry Kane, the top striker of Tottenham Hotspur, was being discussed for them. But because it was too expensive, the issue was quickly resolved. Just like Cristiano Ronaldo. When looking for top-class accommodation (i.e. Champions League), the Portuguese superstar had a look at the record champions.

But maybe the future is starting right now. Exactly in this phase in which Nagelsmann wants to rethink everything. In his 169 competitive minutes for FC Bayern (spread over five games, garnished with five goals), Tel impressively indicated how much he can give the club. Lothar Matthäus, who often says clever and constructive things compared to other TV experts, even sees the storm jewel as part of the solution. He advises Nagelsmann to "return to the tried and tested 4-2-3-1 and play with a real striker. In my opinion, that could be young Tel. Then you just have to trust him and let him play from the start. Because if he has played so far, then he has convinced."

The courage to have talent and the courage to put a star on the bench at the same time is one option. There is no alternative because the transfer market is closed and a quick correction of one's own conviction is no longer possible. The other is: find the way back to the force with which the Munich team thundered over their opponents at the beginning of this Bundesliga season. It would be the path that also redeems Mané. The star striker from Liverpool hit his new home with a bang and has been strangers for weeks. Nagelsmann advised him to be more selfish and less thoughtful. If it were that easy ...

Gate phobia is apparently also highly contagious and is now even spreading to Gravenbruch. This is a district of Neu-Isenburg in the district of Offenbach. That's where the national team checked in. Actually, the selection of national coach Hansi Flick is always a wellness oasis for stressed DFB players. But the recovery factor is not yet working for Joshua Kimmich. The mood of crisis at his employer still annoys him. "You get really angry," admitted the always ambitious midfield driver in a media round, "even today in the training game we had a lot of chances again - and we lose again because you don't clean things up."

Publicly they are bad-tempered at FC Bayern, but not in panic mode. They trust in the strength of the squad and the competence of the coach, whom they committed to themselves for five years last summer. Sports director Hasan Salihamidžić thinks: "We can do it and we have players for it - only they have to play it better to the end." Yes, a goal would do FC Bayern's game good. And Julian Nagelsmann. 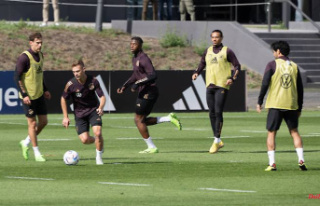 Kimmich "brutally annoyed": Can this pink...