Support for Ukraine, for women in Iran, for queer people: At the World Cup in Qatar, a speedster sends a signal that goes around the world. 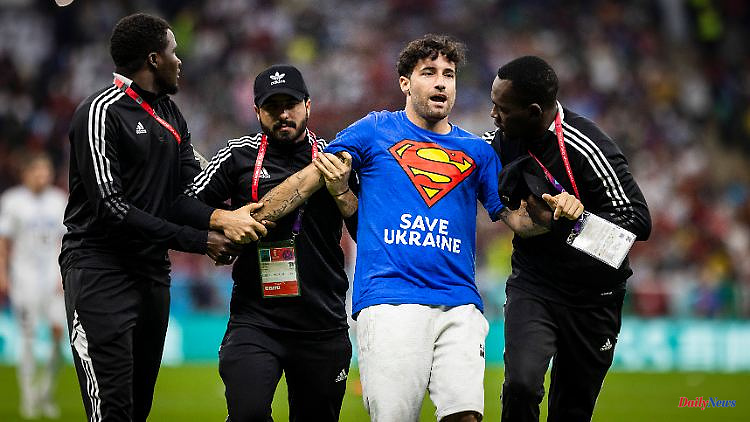 Support for Ukraine, for women in Iran, for queer people: At the World Cup in Qatar, a speedster sends a signal that goes around the world. While the TV pictures hardly show the man, it quickly becomes clear that it is Mario Ferri who is protesting. It's not the first time he's done this.

In the worldwide live broadcast of the World Cup preliminary round match between Portugal and Uruguay, the speedster running across the lawn with three clear messages can hardly be seen. FIFA and hosts Qatar refrain from engaging in political debates, as exemplified by the ubiquitous discussion about the "One Love" armband at the start of the tournament. It was about bans, threats of punishment, accusations of arbitrary use, alternative forms of protest. Culminating in the picture in which the German national team demonstratively holds their hand in front of their mouth. The speedster now also succeeds in getting photos around the world that convey his statements. And they help to find out who the brave man is who made his way from the stands into the interior in the Superman shirt.

International media unanimously identify the speedster who successfully played on the big soccer stage as Mario Ferri. "Save Ukraine" was written on the front of his shirt, on the back he demanded "Respect For Iranian Women", in his hand he carried the rainbow flag. Ferri is said to be 35 years old, active as a professional footballer himself, but outside of the major leagues. His career path can be traced on "Transfermarkt.de", which has led him to San Marino, Jordan and India via lower-class Italian leagues. Earlier this season he played for San Marino's Tre Fiori FC in Europa Conference League qualifiers.

His protest actions, for which he overcomes barriers and grandstand fences, attract much more attention. In 2009, for example, Ferri streaked across the pitch at an international match to demand (ultimately unsuccessfully) that striker Antonio Cassano be included in Italy's squad for the 2010 World Cup in South Africa. When the defending champion fails there with a crash in the preliminary round, Ferri tells the national coach Marcello Lippi in a similar action: "Lippi, I told you so".

In December 2010, according to the UK edition of Yahoo Sports, Ferri developed a political voice for the first time. During the final of the Club World Cup in Abu Dhabi, he finds a way onto the pitch and demands: "Free Sakineh". This refers to the Iranian Sakineh Mohammadi Ashtiani, who had previously been sentenced to death and was released in 2014 after nine years on death row. Ferri is therefore arrested. During the 2014 World Cup in Brazil, he also made it through all the bans in the preliminary round match between Belgium and the USA. "Save Favelas Children" is his message, loosely translated as a call to save the marginalized children of the favelas.

The Italians also protest in this way again and again in games in Serie A, according to media reports, as well as in the Champions League. In Qatar, the 35-year-old even got approval from the pros. Portugal's Ruben Neves said after the game: "We all got his message, the whole world got it." He also wishes: "I hope nothing happens to the boy." A FIFA employee whispers something in Neves' ear in the mixed zone when he is questioned on the subject. Exactly what is open.

Ferri doesn't seem to have to fear any consequences for his actions. The Italian Foreign Ministry announced on Tuesday that the man was free again: "After a short arrest, the man was released by the authorities without further consequences." Nothing is known about his whereabouts and therefore also not whether he might have to leave Qatar or whether he has left the country. The apparent impunity is also likely to be related to the public, international attention that is being focused on the emirate these days.

The emirate's handling of LGBQTI* (LGBT is the English abbreviation for lesbian, gay, bisexual and transgender, the Q stands for queer people, the I for intersex people, the asterisk for the inclusion of other gender identities and sexual orientations) has been special since the start of the tournament observed. While in club competitions the responsibility for disruptions to the game by spectators lies with the home club, in the World Cup this falls on the host, in this case Qatar. Otherwise, fines and sometimes stadium bans or even more are usual.

In 2018 there was a similar protest at the final of the World Cup in Russia, when four Pussy Riot activists got onto the square. A Moscow court imposed 15 days of arrest. Such a penalty for Ferri is now unlikely, even if FIFA and the Qatar organizing committee have not yet commented on ntv.de's request. Instead, the priority should obviously be that the Italian entered the interior without permission.

The activist's commitment now even seems to go beyond protest. "Yahoo Sports" reports that shortly after Russia's illegal war of aggression began, Ferri drove to the border between Poland and Ukraine to offer help and bring refugees to safety. Anton Gerashchenko, adviser at Ukraine's Interior Ministry, shared a video from March this year on the occasion of the images from Qatar. He wrote: "The man who ran onto the soccer field at the World Cup is Mario Ferri." In the spring "he helped Ukrainian women and children on the Polish border. Many thanks!" 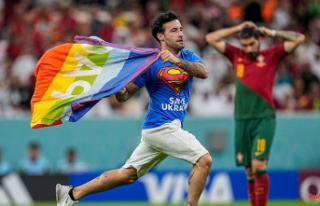