Teen ignites, but without a goal: Flick is no longer allowed to replace this Musiala 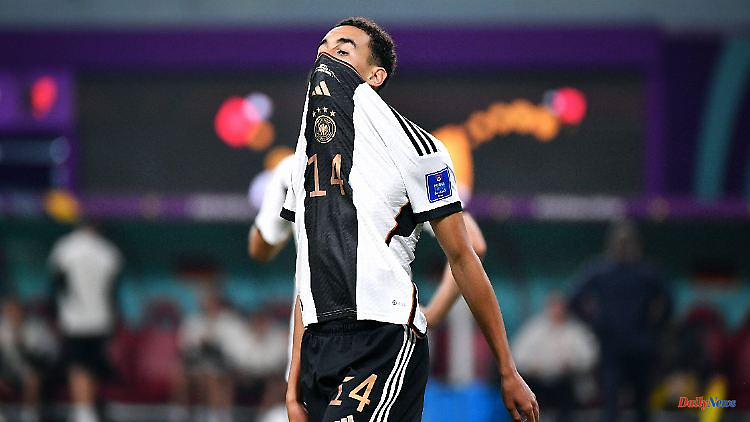 Jamal Musiala, Germany's super teenager: The Bayern professional shows breathtaking dribbling, ball touches and goal threats against Japan, which are urgently needed in the DFB team. But the 19-year-old forgives several times in the final. That has to change - but you can't replace him anymore.

Jamal Musiala has long since cleared the first hurdle to world stardom. The international media has long been interested in the exceptional 19-year-old striker. This is of course also due to his past in the English U-national teams. And the ever-increasing performance in the Bundesliga. Before the World Cup kick-off of the German national team in Qatar, the Messi comparisons, which have almost become a tradition, come up again. Lothar Matthäus recently spoke of "magic" and enthused: "This is Hollywood" when the teenager, who "must never leave FC Bayern", overran FC Schalke.

Oh well. First, the Munich pro is playing his first World Cup game, against Japan, before he could become any other footballer or any sorcerer (and neither should he anyway). The start of the World Cup went horribly wrong at 1:2 (1:0). Musiala will not have been happy that he became the youngest German World Cup kicker in 64 years by playing in the starting XI. Back then, in 1958, Karl-Heinz-Schnellinger was a few months younger. This record then went to Youssoufa Moukoko when the 18-year-old came on in the final minutes.

First you notice Musiala's nervousness. In the first minute he broke through on the left against two Japanese and a pass to Serge Gnabry would have led to a good chance. But the offensive man then frittered away balls again and again. But at least he is the only one in the German team who increasingly dribbling offensively. In the first half, 93 percent of his passes come through and as a receiver he is always passable thanks to his incredibly strong ball control, even when under pressure.

Musiala soon shakes off her excitement. It's not "magic" by a long shot, but the label "trying" becomes "skillful". In the middle of the first half, İlkay Gündoğan makes a strong heel pass to Bayern, who is knocked off his feet in the penalty area, but the referee lets the advantage run. Joshua Kimmich's beam becomes the best German chance to date.

Germany are still struggling offensively, but if something works, it's through Musiala: He initiates a nice combination with David Raum and Kimmich, but his shot attempt is blocked. The agile 19-year-old is also always available for double passes, the DFB-Elf is getting stronger. And so, in the 33rd minute, Musiala found himself in his first World Cup celebration after Gündoğan converted the penalty to make it 1-0.

Shortly before the break, Musiala gets the rating "very good". In a one-two with space, he brings the ball to Müller in the penalty area, and Kimmich knocks it over the goal. There would have been more. Then in the 45th the first real Messi uh Musiala moment: With a horizontal pass the Munich player is passed to the edge of the penalty area, a touch of the ball and a rotation around his own axis let the opponent run cheekily into the void and Musiala pulls directly with his right - the ball rushes over the beams. Müller applauds.

It's Musiala's small, but always very fine ball touches and clever body deceptions that give him a few centimeters of space. He rarely needs more - and that's exactly what the German game needs more and more. Something like that has been missing since Mesut Özil's abdication.

The supposed 2-0 was also due to one of these fine ball contacts: Musiala used a hard and high ball on the center line technically extremely well by skilfully letting it drip directly onto Serge Gnabry. The number 10 takes the teenager with him again, whose pass ends up with Thomas Müller and at some point Kai Havertz pushes in in the middle - but the Londoner is offside

And then comes the scene that they have been waiting for in Germany (and also internationally). The power dribbler starts his brilliant moment. Nothing with Messi, this is Jamal Musiala. The Bayern professional guides the ball very closely as he enters the penalty area. Few body tricks let first two, then three, then four, then five Japanese get off. Insanity! Musiala still dribbles through the box, fakes a shot, makes another hook and hits the ball over the box. What a start, what body and ball control. That was perhaps the best German dribbling since Thomas "Icke" Häßler. Wow. Alone, he doesn't put the ball in in this 51st minute.

And that is the crux of this phase. In this game. Musiala is involved in almost all good offensive actions of the German team, only the 2-0 does not want to fall. And as it is in football, it takes revenge. Shortly thereafter, the doorbell rang in Manuel Neuer's goal. Musiala gets a water bottle and says a few words to Gnabry.

That was it with his first appearance at the World Cup, he received a few words of praise and a friendly clap from coach Flick. But this change error of the national coach takes revenge. Germany then lacks a ball processor that can always be played on the offensive (Gündoğan is missing in the center for the same reasons). Even if Musiala's runs and dribbles don't result in a goal; he tears up spaces, he moves the opponent, he keeps the ball in his own ranks with simple passes.

Without this toolbox, the 1:2 - and Flick's team can't think of anything anymore. The Bayern professional has to watch it all from the bench, his dribbling can only help the DFB team again in the game against Spain. But then the shots should also sit, otherwise it will probably only be three games for the super-teen at his first world championship. In any case, you can't replace a Jamal Musiala in the current form. 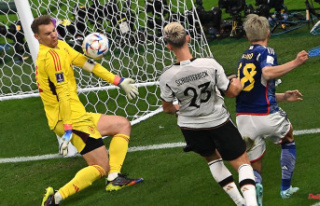