An announcement about the new Borne government is imminent

Parity, political balances and the Damien Abad Case: Emmanuel Macron, Elisabeth Borne are finishing up the puzzle for the new government.

Parity, political balances and the Damien Abad Case: Emmanuel Macron, Elisabeth Borne are finishing up the puzzle for the new government. The Head of State's imminent announcement will finally kick off the second five-year term.

Aurore Berge, the new president of La Republique en Marche in the National Assembly, stressed Sunday afternoon at noon that she would "wait for this reshuffle within the next few hours." Franceinfo reports that the composition of the new government will be announced on Monday, July 4, before a council meeting of ministers later in the day.

This "collective" once formed will "respond to the concerns French", first and foremost the concern of purchasing power. It will then be "definitive installed, because we're here to last", Aurore Berge stated to the Grand Jury RTL-"Le Figaro” - LCI.

Catherine Vautrin was also a former Minister of Social Cohesion at Jacques Chirac, and Matignon was approached the day after the presidential elections. Jean-Marc Zulesi (LREM deputy), Fabienne Keller and Renaissance MEP were also on hand. Also, Joel Giraud and Sarah El Hairy, Secretaries of State for Rural Affairs and Youth during the five-year previous term.

Aurore Berge suggests that the common goal of the new members to the government will be "to share the roadmap chosen by the French" in the election of Emmanuel Macron. This implies that oppositions seeking an "amended” project will come at their expense.

Building the balance of a new group is never easy. This is because of the June loss of absolute majority in the National Assembly. The executive should increase the position of MoDem and Horizons and try to hold the right or left within the framework of the political "overcoming", advocated by Emmanuel Macron.

On Friday, a heavyweight in government spoke out about the importance of having competent ministers and "mastery over Parliament", where compromises will be made.

Francois Bayrou, president of MoDem Francois Bayrou, said that France's "serious" problems were a challenge. He noted that "it is good to have political figures who have in mind that the nation's problems cannot be cut file by file" on Sunday. This implicitly warned against technocratic profiles.

Elisabeth Borne, Prime Minister, has been meeting with many bosses of the Assembly groups over the past few days. She will end her meetings with Emmanuel Macron on Friday.

First, the three failed ministers will be replaced by all women while respecting parity: Amelie De Montchalin (Ecological Transformation), Brigitte Bourguignon, and Justine Benin. Yael BraunPivet (Overseas), who was just elected President of National Assembly, is not to be missed.

The sensitive case of Damien Abad (Solidarity), will be decided. A complaint by a woman regarding the facts surrounding the alleged rape, filed against the minister, is being investigated by the Paris prosecutor's Office. At a party in 2010.

Chrysoula Zigarouou, Secretary of State responsible for Development, is criticized by patients for making gestures they consider "rape" during her time as a gynecologist. Aurora Berge says that she "clearly has my support".

After the reshuffle, Elisabeth Borne's general policy speech on Wednesday (for which she has not yet said if she will seek the confidence by the deputies through a vote) should bring an end to what seemed like a long period in uncertainty. For the executive, it has been almost two and a quarter months since the re-election by Emmanuel Macron on April 24.

The Assembly will receive the long-awaited bill regarding purchasing power on July 18. It is expected to be adopted "before the end July or the beginning of august maximum", Yael Braun-Pivet stated Sunday. 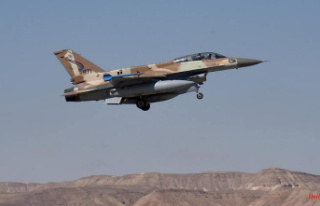 On the way to offshore gas field: Israel intercepts...