Representatives from hundreds of countries travel to London to attend the funeral of Elizabeth II. 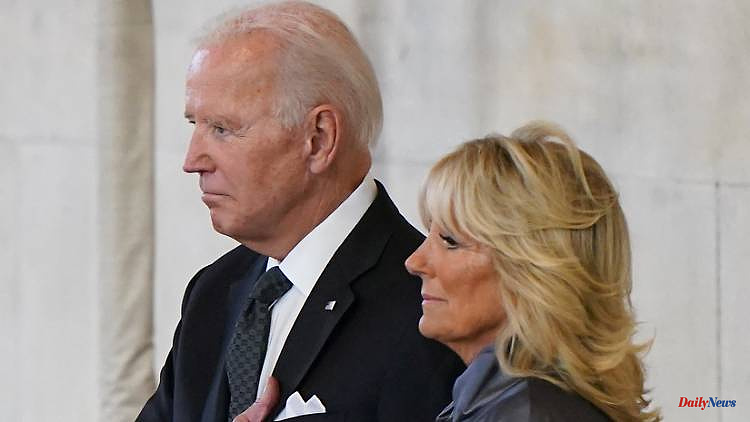 Representatives from hundreds of countries travel to London to attend the funeral of Elizabeth II. US President Biden personally bids farewell to the Queen in Westminster Hall. Later, like other state guests, he is received by King Charles. There is also a minute's silence.

US President Joe Biden and his wife Jill personally bid farewell to Elizabeth II at her coffin laid out in the British Parliament. In the early evening, television pictures showed the Democratic politician and the First Lady of the United States silently looking at the coffin from a podium on the edge of Westminster Hall. The US President crossed himself. EU Commission President Ursula von der Leyen, Spain's King Felipe VI. and the visibly moved Ukrainian President's wife Olena Zelenskain pay their last respects to the Queen in Westminster Hall.

The US Presidential couple was accompanied by the US Ambassador to Great Britain, Jane Hartley. Both then signed the condolence book at Lancaster House. Biden praised the Queen as "decent" and "honourable". "It's a loss that leaves a huge hole," he said. Sometimes you think you'll never get over the loss, said Biden, who spoke again of his mother in connection with the Queen. "But as I told the king, she will be with him every step of the way." The Queen has always been about treating people with dignity. She always conveyed the "idea of ​​service".

Heads of state and government from all over the world traveled to London at the weekend for the Queen's state funeral in Westminster Abbey on Monday. Germany will be represented by Federal President Frank-Walter Steinmeier. On Sunday evening, King Charles III. Biden, Japan's Emperor Naruhito and hundreds of other officials and dignitaries at Buckingham Palace. In the evening, the country observed a minute's silence for the monarch, who died on September 8 at the age of 96.

The Queen's coffin has been laid out in Parliament since Wednesday. Hundreds of thousands took the opportunity to pay their respects to their monarch, queuing for hours in a kilometer-long queue. The public display should not end until Monday morning. However, no new mourners could line up early Sunday afternoon because they would not reach Westminster Hall in time.

King Charles first received Australian Prime Minister Jacinda Ardern for an audience. "You can tell it means a lot to him to see the sheer extent of people's feelings for the late Queen," Ardern told the BBC. At the same time, she indicated the challenges facing the royal family: she expects New Zealand to abolish the monarchy "while I'm still alive".

The first curious people were already camping out around Westminster Abbey in order to secure a good seat when the coffin is driven through London. The teacher E.J. Kelly from Northern Ireland and friends got a front row seat on the processional route between Westminster Abbey and Windsor Castle. "It's wonderful to see it on TV, but being here is something completely different," said the 46-year-old, who was equipped with a camp chair, warm clothes and an extra pair of socks.

On Saturday, Charles and his son Prince William surprised people standing in the kilometer-long queue in front of Westminster Hall with a visit. The crowd cheered the king and his eldest son as they thanked the mourners for their condolences. The royal family also returned to Westminster Hall for wakes - on Friday night the king and his three siblings, on Saturday night Elizabeth II's eight grandchildren.

Meanwhile, Charles' wife Camilla, who now holds the title of King's Consort, paid tribute to the Queen's lifetime achievement. She went her way as the only woman in a male-dominated world and had to shape her role herself at a time when there were no female heads of government or presidents, she told a television station.

After the funeral service at Westminster Abbey on Monday noon, the coffin containing the Queen's remains will be taken to Windsor Castle in a final solemn procession. The funeral will take place there in the company of the royal family. The funeral ceremonies for the Queen are taking place under massive security precautions - for the London police it is the largest operation in their history.

1 "A wonderful feeling": Pietro Lombardi reveals... 2 Emotional apology: Lady Gaga has to cancel the concert 3 Interview with Alexander Scheer: dreamer, rock 'n'... 4 "There are no dream women": Amelie Fried... 5 Before the funeral: King Charles III. welcomes guests... 6 "Half is done": Sara Nuru is pregnant 7 Entertainer with chart record: Robbie Williams overthrows... 8 The "crime scene" in a quick check: A whole... 9 Only for "working royals": Harry and Meghan... 10 "The House of Dreams" on RTL: Emotional... 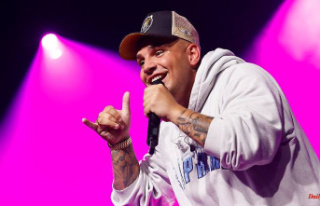