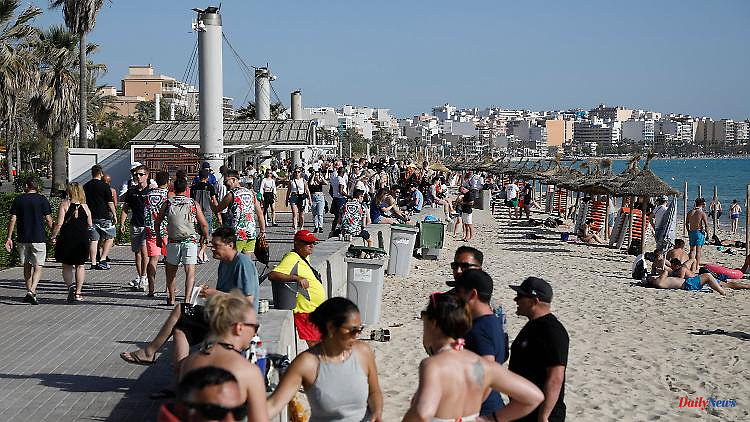 The roof of a popular bar in Palma de Mallorca suddenly catches fire, injuring two people. A group of Germans are said to be responsible for the fire, who are said to have ignited a thatched roof with cigarette butts.

The police arrested 13 German vacationers in Mallorca because they are said to have started a fire in a restaurant not far from Ballermann. They celebrated on the balcony of their hotel and flicked cigarette butts onto the reed canopy of the "Why Not" restaurant on the ground floor. The roof caught fire Friday afternoon. It was initially unclear where the arrested people came from in Germany.

According to the German landlady Alice Klotz, the damage was around 150,000 euros. Two people were slightly injured, as the "Mallorca Zeitung" wrote. The entire outside area was devastated. Klotz was able to prevent worse. "I had a few guests in the restaurant, whom I had just shown to the rear terrace, which leads out to the hotel," says Klotz. "Suddenly it smelled a bit burnt. I went into the kitchen to see if the stove was accidentally still on. Then I heard 'fire, fire' shouted from outside." Shortly thereafter there was a huge bang. "I quickly unscrewed all the gas bottles and took them to safety."

The tourists should be brought before a judge on Saturday evening, who will decide on further proceedings. It will also be about whether the holidaymakers started the fire intentionally or just acted extremely negligently.

At the moment, the Ballermann is celebrating wildly again, just like before Corona. There are practically no longer any corona measures in Mallorca. In the past few weeks, there have been more fights and thefts in the German holiday hotspot.