On the sidelines of his visit to Tehran (Iran), for a tripartite summit with his Iranian and Turkish counterparts, Vladimir Putin publicly spoke about the war in Ukraine. 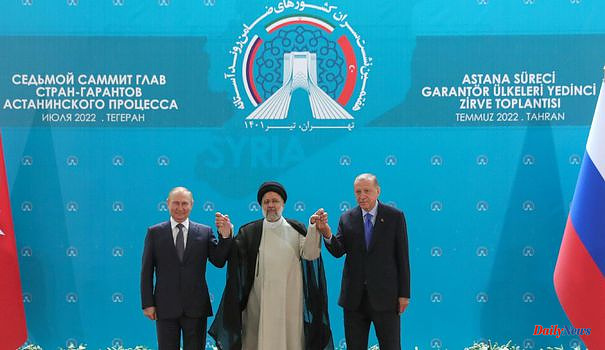 On the sidelines of his visit to Tehran (Iran), for a tripartite summit with his Iranian and Turkish counterparts, Vladimir Putin publicly spoke about the war in Ukraine. He said on Tuesday that Turkey's mediation had made progress on the issue of grain exports from Ukraine to the rest of the world. But he claims, to open the ports, the lifting of sanctions concerning the delivery of Russian cereals.

Russia is "working to annex Ukrainian territories" that have come under its control in recent months, using the same "instruction manual" as for Crimea in 2014, the White House accused on Tuesday. "The Russian government has detailed plans to annex a number of regions in Ukraine including Kherson, Zaporizhia and all of Donetsk and Luhansk Oblasts," said John Kirby, who coordinates President Joe Biden's communications on strategic issues. .

The "illegitimate" representatives that Moscow has imposed in these areas "will hold puppet referendums on reunification with Russia, perhaps in September during the Russian regional elections", he added. At the same time, Russia is seeking to set up Russian banks there to generalize the use of the rouble. Also, it "forces residents to apply for Russian citizenship", "imposes its followers in the security services", while "sabotage the civilian internet", in the words of the White House.

Regarding Vladimir Putin's visit to Iran, the United States sees it as an "admission of weakness", John Kirby considering that "it shows to what extent Putin and Russia are increasingly isolated since they must now turn to Iran for help".

From the Iranian capital, Vladimir Putin informed the journalists present that Russia would "facilitate the export of Ukrainian cereals" in the event that "all restrictions linked to the delivery of Russian cereals are lifted". In other words, he is asking for the lifting of part of the sanctions, something unthinkable for Westerners.

He also spoke about gas exports, assuring that the giant Gazprom was ready to meet its contractual obligations in terms of delivery. He added that the decrease in gas flows was not the responsibility of Russia, but due to maintenance problems. Earlier in the day, Reuters reported that Russian gas deliveries from the Nord Stream 1 pipeline were expected to resume on Thursday.

On the ground, a missile fell on Tuesday in the city center of Kramatorsk, in eastern Ukraine. The provisional toll reports one dead and six wounded. Still ruled by the Ukrainian authorities, this city of 150,000 inhabitants has become a strategic target in the Russian conquest of Donbass and is regularly hit by gunfire.

This attack comes as Russia announced last Saturday that it was ending its "operational pause" and resuming its march forward. Russian strikes also hit residential buildings in Soledar, Avdiika and Bakhmon. In the Odessa region, Russian forces fired seven missiles, injuring at least six people including a child, according to the Ukrainian presidency. The latter also claims that his army has "successfully repelled" several "assault attempts" near Bakhmout in the east.

The Ukrainian Parliament on Tuesday validated the dismissals of the head of the security services Ivan Bakanov and the general prosecutor Iryna Venediktova, proposed this Sunday by Volodymyr Zelensky, who accuses them of insufficient efforts in the fight against Moscow collaborators. The president also announced a "review of executives" within the security services, while at least three senior officials are suspected of high treason.

In addition, the head of the cabinet of the Ukrainian presidency, Andriï Iermak, underlined the need for his country to reverse the military situation before winter, so that Russia cannot settle permanently. "It's very important for us not to go into the winter. After the winter, when the Russians have more time to get a foothold, it will definitely be more difficult. They are training us there. It's very important for us to not giving them that opportunity," he said. To do this, kyiv is asking the West for more precision and long-range artillery systems, such as the Himars multiple rocket launchers supplied by the United States. In this context, the head of French diplomacy, Catherine Colonna, indicated on Tuesday that six new Cesar self-propelled guns, in addition to the 12 already delivered, were "on their way" to Ukraine. 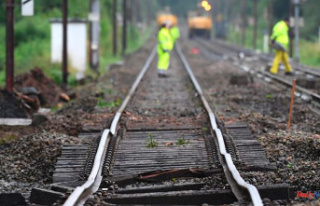 How 'Russian partisans' are sabotaging supplies...