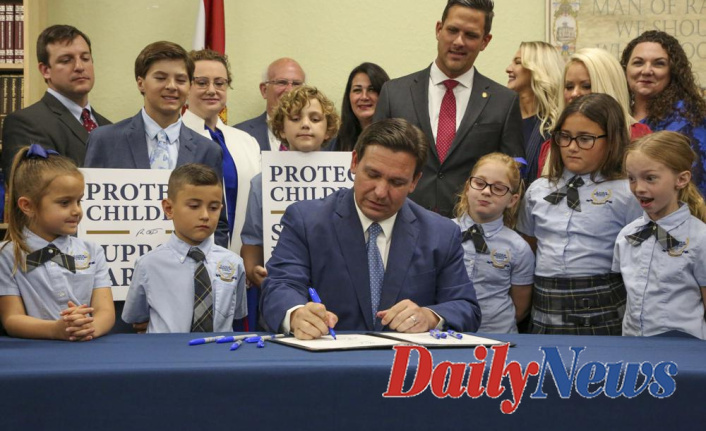 This policy has been subject to intense scrutiny by critics who claim it marginalizes LGBTQ persons.

Florida and DeSantis have been pushed to the forefront in the country's culture warfare. The measure has been dubbed "Don't Say Gay" by LGBTQ advocates, students, the entertainment sector, and the White House.

DeSantis and other Republicans repeatedly stated that the measure was reasonable and that parents should discuss sexual orientation and gender identity with their kids. Just days after DeSantis signed another bill, the law was put into effect. could limit what books elementary school can have in their libraries or use as instruction.

DeSantis proclaimed, "We will ensure that parents can send children to school to receive an education, and not an indoctrination." He was greeted with applause as he signed the sexual orientation/gender identity measure at a ceremony at a prep school near Tampa.

The law says that "classroom instruction by school personnel on sexual orientation and gender identity may not be given in kindergarten through grade 3, or in a manner not appropriate for their age or developmental needs." Districts could be sued for violations.

Celebrities mobilized against the bill on social media and criticised it at the Academy Awards this year. Students from Florida staged walkouts, and crowded into statehouse halls and committee rooms to protest the bill.

The Walt Disney Company is a prominent player in Florida politics and suspended political donations to the state. LGBTQ advocates working for the company criticised CEO Bob Chapek's slow response against the bill. Some protestors walked out of the office.

Disney issued a statement after DeSantis signed it. It stated that "our goal as a business is for this law be repealed or struck down by the courts. We remain committed to supporting national and state organisations working towards that goal."

During debate at the GOP-controlled statehouse Democrats stated that the law's language, especially the phrases "classroom instruction", and "age appropriate," could have been interpreted so broadly that any discussion could trigger lawsuits. This could create an atmosphere in which teachers would avoid discussing the subject matter.

"The bill's deliberately vague language makes teachers afraid to talk with their students and opens school districts up to frivolous litigation by those who seek to exclude LGBTQ people from all grades," stated Carlos G. Smith, a gay state representative. "Even worse #DontSayGay sends hateful messages to our most vulnerable youth, who just need our support."

Andrew Spar, president and CEO of the Florida Education Association said that the law is a political issue for Republicans. Elementary schools in particular, kindergarten through third grade, don't teach these subjects, while state curriculum standards guide classroom lessons.

Spar stated that the bill was based on a lie that suggests that we are teaching children inappropriate topics too young.

Republican Rep. Joe Harding is the law's sponsor. He stated that it would not prohibit schools from having spontaneous discussions about gender identity or sexual orientation, but would stop districts from integrating these subjects into their official curriculum. Harding wanted to make it mandatory for schools to notify parents when a student identifies as LGBTQ. After the amendment gained attention online, he withdrew it.

"Nothing in this amendment was about outing students. He stated that he decided not to fight misinformation about the amendment and instead he focused on the primary bill which empowers parents to be involved in their children's lives.

After a press conference at Spring Hill's Classical Preparatory School, 46 miles (74 km) north of Tampa, DeSantis signed and signed the bill. DeSantis was joined by other politicians at the podium by several children, some of whom were holding signs with the governor's slogan "Protect Children/Support Parent". DeSantis handed the children the pens that he used for signing the bill.

The White House has made statements against the law after a dispute with the DeSantis administration on a variety of policies. Biden tweeted Monday, "My Administration will continue fighting for dignity and chance for every student-family -- in Florida as well as around the country."

Recently, U.S. Secretary Education Miguel Cardona held a conference call with LGBTQ students from Florida. He stated in a Monday statement that his agency would "monitor this law upon its implementation to determine whether it violates federal civil right law."

According to Michael Woods, a Palm Beach County special education teacher with over three decades of experience, there has been some confusion among teachers about what is permissible in classrooms and concerns over frivolous lawsuits.

He stated that he thought the solution was in search of a problem from the beginning. However, the sad thing is that it will have a chilling impact on students and young people. 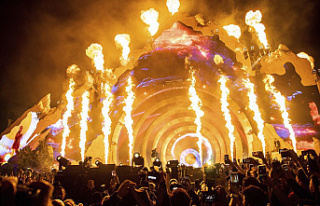 Travis Scott is accused of violating the Astroworld...