After a year of abstinence, the Bundesliga is back at Schalke. 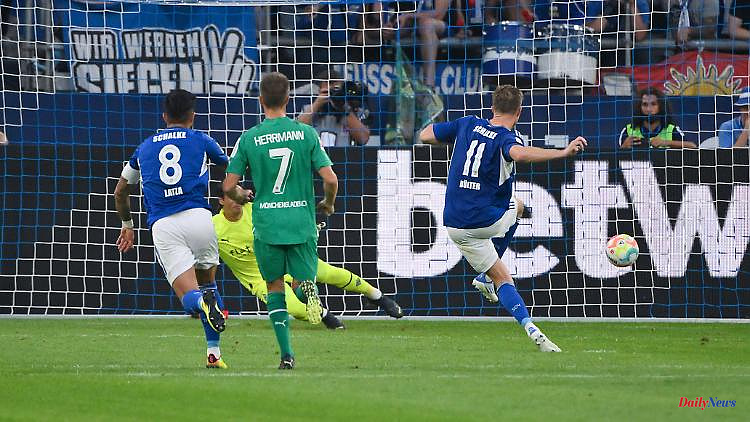 After a year of abstinence, the Bundesliga is back at Schalke. The fans of the Royal Blues offer a great stage on the 2nd matchday against Gladbach and the promoted team also leads for a long time. Then everything goes away within a few minutes - and in the end Schalke celebrates thanks to the VAR.

A penalty goal by Marius Bülter saved FC Schalke 04 a point against Borussia Mönchengladbach on their home debut after returning to the Bundesliga. The 2:2 (1:1) in added time (90.3) on Saturday evening made for a small blue and white summer party.

In front of 62,271 spectators in the sold-out arena, it had only looked like another bitter game for Schalke after promotion. Jonas Hofmann (72nd) and Marcus Thuram (78th) had turned the game in favor of Borussia, which had been disappointing for a long time. Rordrigo Zalazar (29th) took the lead at Schalke. Bülter's converted hand penalty, which only came about after the intervention of the video referee, provided Schalke ecstasy.

Curious: At the start of the season, Schalke felt disadvantaged by the VAR after several controversial decisions to their disadvantage. In an interview with the "Süddeutsche Zeitung", Schalke boss Peter Knäbel expressed his dissatisfaction with several decisions made during the Bundesliga returnees' 3-1 defeat at 1. FC Köln and took this as an opportunity for fundamental criticism.

"If there are department store detectives sitting in the basement and looking for a picture in which you can prove some guilt, then the values ​​of the game are not respected," said Knäbel, among other things. The referee became a referee so that he could decide for himself. "But if the future of the game is that individual scenes are analyzed using still images, then it's not my game anymore," he added. "The course of events and the context of the game are more important than the individual image that reflects a specific moment. If the referee says he can't get past the image, then that's obsession with technology that damages football," emphasized Knäbel

Despite the 1: 3 at the league opener last weekend at 1. FC Köln, the euphoria in Schalke after promotion was clearly noticeable even before the first home game of the season. 62,261 spectators in the sold-out arena - including around 7,000 Gladbach fans - provided an atmospheric setting in hot summer weather with temperatures well over 30 degrees. "You get a little pee in your eyes because you're hooked. It doesn't get any hotter than that," said Schalke's coach Frank Kramer shortly before kick-off on Sky. With a tremendous blue and white choreography, the north curve made the royal blues really hot again. That worked.

From the start, the home side, who were less playful than Borussia, gave it their all. Schalke's pros were snappy, fighting for every centimeter and stressing the Gladbach team, who were trying to structure themselves. That didn't sit well with Borussia, who were actually geared towards possession, and they kept leaving Farke's line too early. After a few dangerous offensive actions at the beginning of the game, the Revierclub did not deserve the lead after half an hour. A powerful long-range shot from Zalazar hit the bottom right corner of Gladbach's keeper Yann Sommer, out of reach.

The Gladbachers, who were unbeaten in the preparation and in the first two competitive games under their new coach, reacted with surprise and shock to the unexpected setback. In comparison to the sovereign 3:1 on the first matchday against TSG Hoffenheim, who also played along, the Rhinelanders were unrecognizable. The uninspired Farke-Elf had significantly more problems with Schalke's game, which was more geared towards destruction and combat. Without the still injured captain Lars Stindl, national player Florian Neuhaus as his representative behind the strikers had a very weak performance.

After the change, Gladbach became even more decisive in the game, but still had great problems creating compelling chances. Overall, however, the home side were now pushed further into the defensive. Schalke hardly became dangerous anymore. Hofmann literally worked the equalizer into the goal after a good 70 minutes. Shortly thereafter, Thuram scored - but Schalke's Bülter put the end. 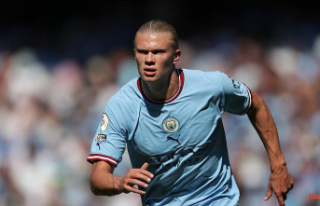 Clear victory, back to zero: City breaks down favorite...