Title defense is possible: U21 books EM ticket, but has several injuries

The European Championship finals can come: Germany's U21s book the ticket with an easy win against Hungary. 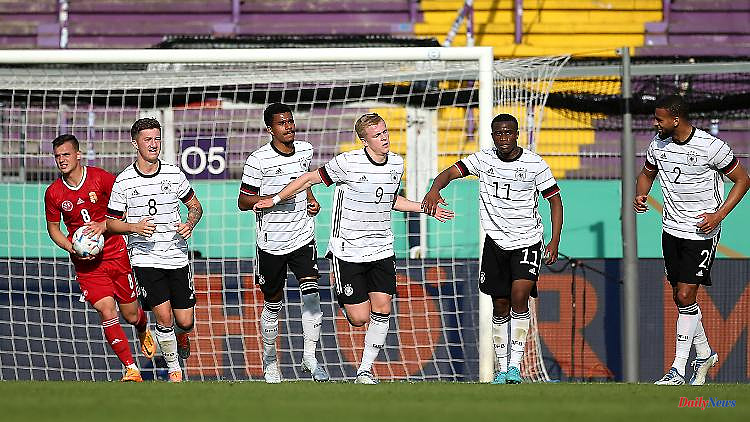 The European Championship finals can come: Germany's U21s book the ticket with an easy win against Hungary. Coach Antonio Di Salvo's team can thus defend the title as European champions. An efficient performance is enough, but there are several injuries to complain about.

With an unchallenged home win, Germany's U21 national team has achieved the first major milestone on the way to the desired title defense and bought the ticket for the final round of the European Football Championship in 2023. Coach Antonio Di Salvo's team beat Hungary 4-0 (2-0) on Friday in front of 5,609 spectators in Osnabrück, also thanks to several mistakes by the opponent.

"The coach has already announced that if you perform well, you can celebrate. We're doing it accordingly now," said Ansgar Knauff from Europa League winner Eintracht Frankfurt on Sat1. Goalscorer Knauff added: "The EM ticket was our goal and we achieved that. Now we will celebrate, that's clear."

Storm talent Youssoufa Moukoko (17th minute), Jonathan Burkardt with a penalty kick (31st), Tom Krauß (76th) and Lazar Samardzic (90th 3) scored at the sold-out Bremen bridge for the youth of the German Football Association. The selection is thus already certain as group winners before the final qualifier in Poland next Tuesday and can defend the title of the previous generation at the tournament in Georgia and Romania. It is the sixth European Championship in a row for Germany's U21 national team.

The joy of the EM ticket was clouded by several injuries: Union Berlin's newcomer Jamie Leweling and midfielder Angelo Stiller had to be replaced injured. Defender Malick Thiaw had to be treated longer but was able to continue playing. Exact diagnoses are still pending.

The 17-year-old Moukoko, on the other hand, made an impressive comeback after a difficult season with little playing time at Borussia Dortmund in the U21s. In his first appearance since last September, he scored his fourth goal in the U21 jersey in the third game.

Even the early setback caused by Leweling's injury didn't bother the DFB youth team in the best summer weather. Di Salvo brought on Faride Alidou from New Frankfurt (9th) for him. Defensively, however, the team not only made repeated lack of concentration and slight ball losses in the initial phase.

Thanks to the weak defensive performance of the guests, these were not of great importance. A failed back pass led to Moukoko's 1-0, and the Hungarians also helped a lot in Burkardt's 2-0 with a foul on Mainz in the penalty area. Captain Burkardt also hit the post (41') after a mistake made by Hungary in the build-up game.

With the offensive power of Moukoko, Burkardt and the Frankfurt Europa League winner Ansgar Knauff, who, however, had a weaker day, Di Salvo's team pushed for the third goal. In the urge phase, however, the team had to cope with the next injury, Hoffenheim's Stiller hobbled off the pitch injured.

Shortly afterwards, Thiaw required prolonged treatment for a facial injury, but the team overcame this setback as well. Krauss, who was last loaned to 1. FC Nürnberg, eliminated the last doubts about the European Championship qualification with his goal. Udinese Calcio substitute Samardzic scored his debut goal in his first U21 cap. 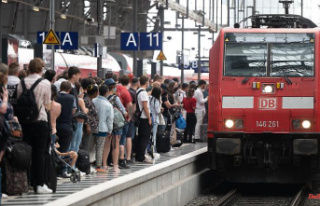