The Oppo Find X5 Pro and the Oneplus 10 Pro look similar at first glance, but differ significantly in important components. 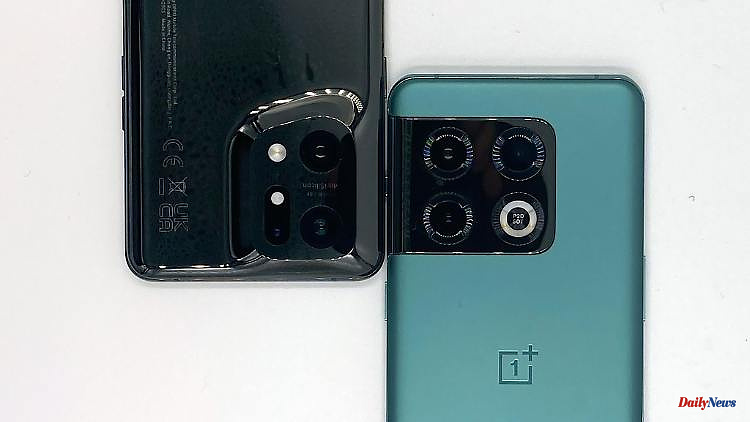 The Oppo Find X5 Pro and the Oneplus 10 Pro look similar at first glance, but differ significantly in important components. Ultimately, the question arises as to whether you prefer an attractive price-performance ratio or an expensive but consistently well-equipped smartphone.

Viewed from the front, they resemble each other like peas in a pod. A large and slim glass front, rounded corners, a small hole for the front camera on the top left. At first glance, the Oppo Find X5 Pro and the Oneplus 10 Pro could be twins.

Much of the same technology is also inside: Qualcomm's Snapdragon 8 (1st generation), up to 256 gigabytes (GB) of memory, a maximum of 12 GB of working memory (RAM). There are also 6.7-inch AMOLED displays with a 120 Hertz refresh rate and batteries, each with a capacity of 5000 milliampere hours (mAh). Even the operating systems are similar, even if the in-house development based on Android 12 is called Color OS for Oppo and Oxygen OS for Oneplus.

You don't have to be surprised. Both brands belong to the Chinese manufacturer BBK Electronics - just like Realme or Vivo. Similar to car manufacturers, there are also smartphone platforms. Lots of the same parts, then specialization for different types of customers. Is that bad? Not really. If you turn both smartphones over, you will see the difference: both of them have the logo of the camera manufacturer Hasselblad, but that was it with the similarity.

The Oppo Find X5 has a glossy ceramic body with a seamlessly protruding camera bump. Two large lenses, one small, one sensor, one LED. Simple, elegant and durable - you have never seen anything like it. The ceramic surface is surprisingly non-slip and scratch-resistant.

The Oneplus 10 Pro is more classic. The back is made of matt special glass - the test device is green. The camera with its three large lenses, the sensor technology and LED in the fourth circle protrudes from the side and protrudes a little.

So it's all just a question of style? Not at all. The cameras differ significantly in some cases. With the Oneplus you get a solid 48-megapixel main camera, plus an ultra-wide angle and a zoom camera with 3.3x optical magnification.

Camera specialist Hasselblad helped with the color calibration, but there are no details on the collaboration. The cooperation can be seen and heard by the orange shutter button in the photo app, which is typical for Hasselblad cameras, and the shutter sound that sounds like a mechanical camera shutter.

The trio largely do good, if not top-notch, work. The photos turn out well, the recording modes are understandable and the Pro mode provides photo enthusiasts with extensive manual setting options. In low light, however, the details go flutes. And: Switching between the cameras takes a long time. Even a two-year-old iPhone 11 Pro switches back and forth between wide-angle and zoom much more quickly.

Oppo takes a different approach with the camera. The 50-megapixel duo of wide-angle and ultra-wide-angle with macro function is supported by a 13-megapixel telephoto camera with only 2x zoom. There is also 5-axis image stabilization. An additional chip should make the special difference. Marisilicon X is the name of the signal processor that is supposed to reduce noise and improve image quality, among other things. Night videos in 4K should also work better.

In practice it turns out that it works. In direct comparison, the images from the Oppo are clearer, sharper and more detailed, even in low light. The macro mode offers a few additional options when taking photos. Oppo also relies on color calibration with Hasselblad - the result looks a bit more colorful and lively than the Oneplus. Camera switching is sluggish on Oppo too.

It might sound like a small thing, but since the Oneplus One, Oneplus devices have had a ring, vibrate, and mute switch. Once used to it, you don't want to miss it. The Oneplus 10 Pro has it, the Oppo Find X5 Pro doesn't.

Both devices have a fairly large battery with a capacity of 5000 mAh each. Loading times are blazingly fast compared to competitors. The Oppo's thick 80-watt charger is said to charge the battery to half in twelve minutes, but in practice it takes a few minutes longer. Full charging takes almost 40 minutes.

Thanks to a new battery care technology, the energy store should be able to withstand 1600 charges without damage. With a battery life of one and a half to two days, which is normal in the test, it already accounts for a few years. However, time will have to show whether this will also work.

There are similar values ​​with the Oneplus 10 Pro - the package contains the same 80-watt charging block. Oneplus says goodbye to its own Warp Charge and now uses the technology called Super Vooc, which is also in the Oppo charger. So actually only a little difference for long-time Oneplus users.

Impractical: The chargers are quite large. And although they would actually be suitable for notebooks based on the performance data, they failed in the test. So saving weight when traveling is not an option.

The Oppo Find X5 Pro with 256 GB of storage and 12 GB of RAM costs 1299 euros. With this, Oppo lets its smartphone play in a price league with the iPhone 13 Pro or Samsung's Galaxy S22 Ultra.

The Oneplus 10 Pro doesn't have to hide. It has everything you need. However, in the end it is "only" a pretty good smartphone with a nice design, a solid camera and a comparatively good price. No more, no less.

In a direct comparison, the Oppo Find X5 Pro is ahead. It has the overall more rounded camera package. And a design as independent as Oppo's ceramic case should be more common. You don't miss the missing correct zoom camera. Samsung's Galaxy S22 Ultra, which is also very powerful, is priced in the same league and has a very powerful telephoto camera.

1 Dependence on China: Apple is struggling with the... 2 Expensive commuting: Is it worth switching to a company... 3 Crisis-resistant securities: What now stabilizes the... 4 Shaving foam and gel in the Öko-Test: Here, shaving... 5 These medicinal herbs work wonders: relieve toothache... 6 55 percent protection: TUI with a 9 percent chance 7 Good things from a can: Seven deodorants are "insufficient" 8 Storm and heavy rain: This is how drivers get through... 9 Inflation vs. package of measures: how much does the... 10 Rush at gas pumps expected: gas station industry fears... 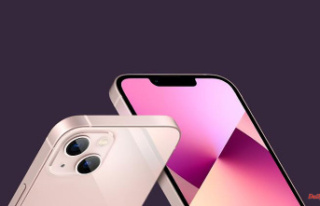 Dependence on China: Apple is struggling with the...