Germany has to cope with a short shock at the Ice Hockey World Championship: Tim Stützle, the young leader, has to leave the ice early against France. 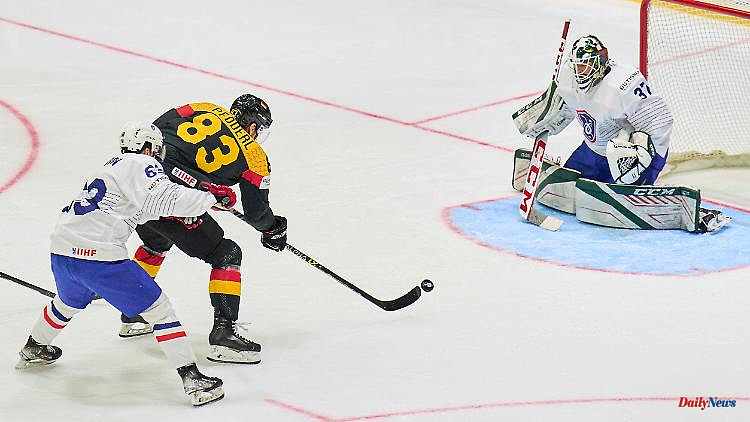 Germany has to cope with a short shock at the Ice Hockey World Championship: Tim Stützle, the young leader, has to leave the ice early against France. But apparently his injury is not too serious. The players from Meister Berlin jumped in impressively for the top talent.

The question of what currently prevails in the German national ice hockey team, relief or concern, was answered on Tuesday afternoon. The pendulum swung in the direction of relief. Not final, but massively urgent. Because Tim Stützle, the spectacular talent from the NHL, had previously caused anxious World Cup moments. The 20-year-old, who has so far shouldered the DEB offensive game so impressively, had to come off the ice in the first third of the game against France on Monday. He had received a hard check to his knee. The question that arose: can he return again in the tournament? The first answer: questionable.

On the free Tuesday there was the first all-clear. "It looks pretty good. We look from day to day," said the sports director of the German Ice Hockey Federation, Christian Künast, the German Press Agency. A deployment in the further course of the tournament is "probable". Incidentally, the association did not announce a diagnosis. "He's in very good hands with our medical department, we'll wait and see for the next few days," said Künast. For the team of national coach Toni Söderholm, the knockout for Stützle would have been further bad news on the way back to the top of the world, i.e. in that elite circle that they had played in at the last World Cup before there was a brutal damper at the Olympics. Instead of playing for gold, Germany was out of the competition before the quarter-finals. Much was questioned. Luckily not everything.

Because so much had not gone wrong in German ice hockey in recent years. A remarkable rise began under coach Marco Sturm, which Söderholm was able to continue to refine. Despite recurring setbacks. Before the World Cup in his home country, the Finn once again received several bad news. For example, the NHL experienced Tom Kühnhackl (Stanley Cup Champion), Tobias Rieder and Dominik Kahun are missing. Even top players from the DEL like Frederik Tiffels and Patrick Hager are not available. It is all the more astonishing how well Germany has played through this World Cup so far.

The DEB team was clearly inferior against Canada (3:5) for a long time, but not without a chance. The cracks played furiously against Slovakia, won 2-1 and thus successfully took revenge for the knockout at the Winter Games. Even more important for the course of the tournament: the 3-2 work victory against France. Why? Because Germany resisted consistently, played courageously, quickly, creatively and defended passionately. Just up to the 60th minute, goalie Mathias Niederberger had to unpack a strong save again to secure the win. The team can claim that it learned impressively quickly from the mistakes of the Olympic debacle. Without a fight, concentration and body tension up to the final siren, games in major tournaments can rarely be won, if at all. In the third preliminary round of the World Cup, the balance between enthusiasm and biliousness was perfect.

Niederberger came on for the NHL goalkeeper Philipp Grubauer, who was outstanding against Slovakia. The goalies form the strong foundation of the German game. Before that, Moritz Seider was enthusiastic. The 21-year-old is in defense what Stützle was and should remain in attack: the leader. The team in Beijing, for example, lacked the courage, carelessness and pace of youth. And because these qualities are so incredibly good, the DEB is still hoping for the nominations of defender Leon Gawanke and striker Lukas Reichel from the AHL. "Both are exceptional players in German ice hockey," said Moritz Müller. A decision should be made on Wednesday at the latest, one day later the fourth preliminary round game against Denmark is due (3.20 p.m. live on Sport1 and in the live ticker on ntv.de), another key game in the fight for the quarter-final ticket.

For the time being, the national coach can and must rely on his Berlin warhorses. Above all to Leo Pföderl, who has been one of the established forces in the DEB team for years, but has perhaps never been as important as at the moment. Against France, he made the victory clear thanks to a perfect pass from his polar bear friend Marcel Noebels. It was already his fifth scorer point in this tournament. "The Berliners, that's crazy," enthused Söderholm, who is not necessarily known for singing such anthems. Small spoiler: he only raved briefly. That the players of the reigning champions deliver like that is not a matter of course. The cracks of the DEL champion did not always manage to prevent a drop in tension after the party and before the World Cup.

Five polar bears cavort in the German squad - and all of them make their contribution to the fact that the team glides successfully over the ice again. In addition to Pföderl, of whom videos are circulating that show him barefoot and with a beer bottle in public at the championship celebration a few days before the start of the World Cup, there are also the experienced Noebels, the defenders Jonas Müller and Kai Wissmann and Niederberger. But the match winner against France stands out: Pföderl, Söderholm calls him one of the "smartest German players" - and the most successful. He is the team's top scorer after the first three games.

Noebels and Pföderl, who form a World Cup series with AHL striker Marc Michaelis, know each other inside out. Already in the spectacular 2:1 against Slovakia, a combination of the duo led to a goal. "You can be confident, you convey that. A tournament like this is like a second championship," says Noebels. Regardless of the strength of the Berliners, the team is pinning all hopes on a lightning recovery from Stützle. "Timmy is one of our best players. Of course that would be bitter," said Captain Müller before the redeeming message from the medical department. The responsibility he is taking on is "incredible". A real leader. One who can go on.

1 Revenge after a fatal swimming accident: Messerstecher... 2 Resistance is crumbling: Günter wants to take the... 3 Interview with SBU legend Körbel: "The finale... 4 FC Bayern is simply bored: the Bundesliga gets scared 5 At the age of 46: DBB legend Ademola Okulaja is dead 6 After the massacre in Buffalo: Biden criticizes the... 7 "Know the sound of guns": US metal singer... 8 Because of suspicion of abuse: Johnson's party... 9 Star chef threatens Eton Mess: Jamie Oliver demands... 10 US circles on the flight recorder: Boeing deliberately... 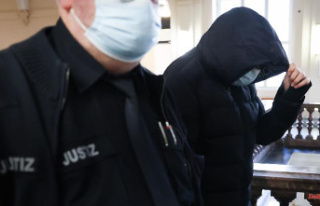