The German Environmental Aid calls for refraining from lavish lighting during the Christmas season. 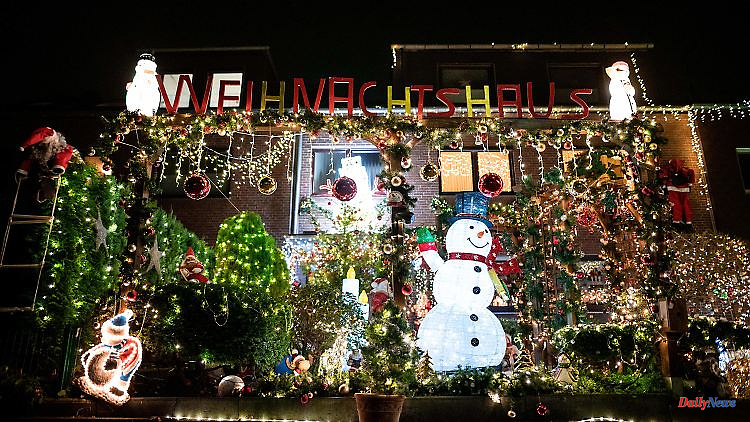 The German Environmental Aid calls for refraining from lavish lighting during the Christmas season. Many towns and communities are already announcing their intention to save energy. But not everyone is enthusiastic about it.

Even if electricity prices are going through the roof: Dirk van Acken from Oberhausen and his wife Barbara want to turn their house and garden into a glittering winter paradise again this Christmas. Year after year, in the run-up to Christmas, the couple falls into a light and decoration frenzy with countless fairy lights, glowing snowmen, little angels and Christmas music on a continuous loop.

The 44-year-old assures that the current energy crisis will not change that. "Every year we are approached by so many people who want to come by. There's also an obligation. We'll keep going." Now the weeks of decorating the thousands of Christmas items that would otherwise be stored in the garage begin.

But not everyone sees it that relaxed. In view of the energy crisis this year, the German Environmental Aid (DUH) called for Christmas lights to be abandoned in cities and private households. "This winter it should be a matter of course that both the Christmas lights in cities and those in houses and apartments will be dispensed with," said Federal Managing Director Jürgen Resch of the editorial network Germany.

"In view of the war in Ukraine, the energy shortage, but also for reasons of climate protection, we should pause for a moment," he explained. Resch pointed out the power consumption and suggested one illuminated tree per city and municipality. "Consciously doing without here, saving and showing solidarity could even make this Christmas season a very special one."

Jörg Meißel decided whether his Christmas house should shine in a survey on the social network Facebook. In the comment columns, the answer was quickly clear: "In any case," wrote a user, "Christmas is the celebration of love, and the glow is part of it." After a two-year Corona break, Meißel now wants to decorate the house in Lichtenstein again: with 80,000 LED lights and up to 180 figures.

But not everyone is opting for the elaborate lights this year: "I want to avoid the discussions," said Thorsten Grüger, who has been illuminating his house in Karlsruhe-Neureut during Advent for years.

Alexander Handschuh from the German Association of Towns and Municipalities (DStGB) emphasizes that the energy crisis depends on local conditions. Possible energy-saving measures this year could also include a reduction in the number of Christmas lights. But: "Cities and municipalities can only make the decision to weigh up the necessary energy savings on the one hand and the maintenance of the city center lighting or the implementation of Christmas markets on the other hand on site."

It is about the question of how high the savings potential to be achieved is, as well as the economic consequences of doing without, for example for the retail trade. The proposal of the German Environmental Aid is "in general not expedient". This is seen in a similar way in the southwest, for example. In Stuttgart, for example, the chains of lights powered by green electricity should only shine on Christmas trees for 240 instead of 450 hours, as the city announced.

The town hall itself does not even have any lighting at all. In the Christmas village of Waldbreitbach in Rhineland-Palatinate, which attracts visitors from all over Germany every year, the lights stay off this morning. "The lighting will be slightly reduced to 6 hours a day from 2 p.m. to 8 p.m., since most visitors are present at this time," said spokesman Florian Fark. In recent years, they have already switched to LED. According to the operator, the power consumption for the eight weeks will be around 3000 kilowatts.

"The consumption is comparable to what a family home with four people consumes in a year," said Fark. With around 30,000 visitors, the electricity costs are less than 600 euros. Dirk van Acken and his wife from Oberhausen also noticed that electricity has become noticeably more expensive and that gas prices have even doubled. This year, according to their own statements, they leave the lights that usually go on at five o'clock in the morning from completely. In the evening, the lighting should be over.

But not only private households and municipal buildings are subject to increasing pressure to save; after the cancellations during the corona pandemic, the Christmas market season is again in danger. In many communities there is a risk of a Christmas season with less lighting than in previous years - it will be a paler festival, even if there are no major cancellations in famous Christmas cities such as Dresden, Nuremberg, Heidelberg or Frankfurt am Main.

Nevertheless, many cities have already announced that they will put up fewer Christmas lights, switch them on less often or reduce opening hours. A good 20 percent less electricity is to be consumed at the Essen Christmas market. In Mainz, they want to implement the decision agreed with the state government to use 15 percent less energy. In Berlin, the large Advent illuminations on shopping streets such as Kurfürstendamm are in danger.

And how do the churches react during the Christmas season, which is so important for many believers? A spokesman for the Evangelical Church in Germany (EKD) announced that many churches have been doing without expensive outdoor lighting for some time in order to save energy.

The pre-Christmas lights that announced the birth of Jesus in the churches were "not glaring gigawatt lights, but flickering signs of hope". According to the EKD, they convey the heavenly message of peace on earth. "This year, this light of hope is needed more than ever."

1 At least 35 dead in Kabul: death toll rises after... 2 Continuous fire from space: is the earth growing or... 3 Baden-Württemberg: Use of weapons in a dispute: suspected... 4 North Rhine-Westphalia: Holiday start: Longer waiting... 5 Bavaria: car takes off in an accident and flies to... 6 Bavaria: Marquee mood at the medical station with... 7 Saxony-Anhalt: After rain and wind, the weather calms... 8 Baden-Württemberg: Red traffic light ignored: Two... 9 "Or they all die together": Ukraine gives... 10 Desire for a four-day week: Corona has left its mark... 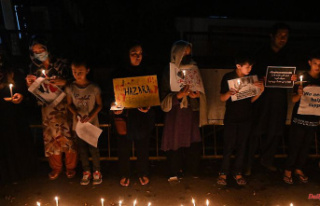 At least 35 dead in Kabul: death toll rises after...