After almost 100 days of war in Ukraine, more and more people are returning to the capital. 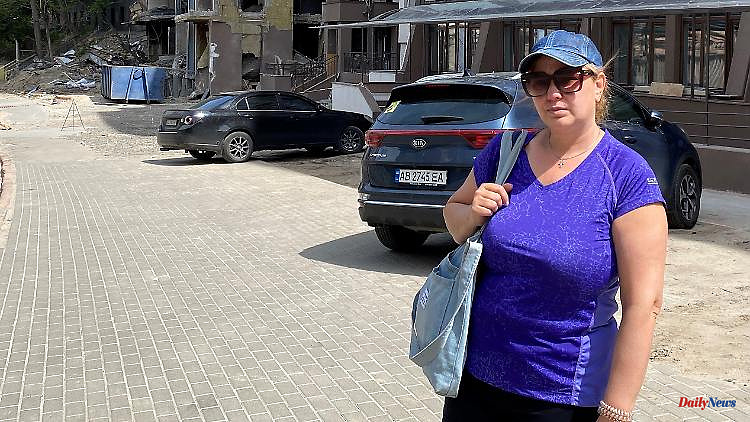 After almost 100 days of war in Ukraine, more and more people are returning to the capital. In places, Kyiv is as alive as it was before Russia attacked. But bomb alerts, sandbags and ruins won't make anyone forget that the enemy is close.

The impact of a Russian missile on a 22-story apartment building in the Shevchenko district of Kyiv blew up entire apartments on the lower floors. Construction workers are clearing away debris on a springlike May day, the facade is intact on the floors above. The window panes are missing. It is unclear whether the static will hold. "It'll be fine," says building manager Jan. The rocket landed around 8 p.m. on April 28 - when UN Secretary-General António Guterres was in town. "I left my office on the third floor at 7 p.m., and an hour later the call came: There had been an explosion," the manager recalls. Many apartments are no longer habitable, but people are living in some again. "Most of all women come back," says Jan. "Some had just returned to their homes after fleeing at the beginning of the war when the rocket hit."

Several people were injured that day in late April. Ukrainian journalist Wira Hyrych was found dead in the rubble. Even a month later, the shock is still deep in many. "The Russians hate us, they want to destroy us and everything," says 47-year-old Tanja, who wants to move into the apartment on the 21st floor. "Only the windows burst there, which we now have to replace," explains Jan. She has to pay for it herself.

The private entrepreneur says that the apartment was about to be renovated, so nobody was there when the rocket attacked. She pours out her heart: mother and father are Russians, she lives nearby with her 77-year-old mother and 52-year-old brother, who owns the apartment in the high-rise. "He doesn't get back on his feet after contracting Covid. Sometimes I don't know what's going to happen next," says Tanja. Your eyes get wet. Above all, she fears the winter, that Russia could turn off the gas supply and let people freeze to death.

"The worst thing is that the family is torn apart. My uncle in St. Petersburg, my girlfriend in Moscow, they don't want to believe that the Russian military is shooting at us with rockets, that they are committing crimes, raping, murdering and looting women . They think it's a fairy tale." Nobody asks how they are doing. "No more contact."

In fact, the Russian military reports daily that only military objects are fired at with "high-precision weapons." But in reality they often hit civilian infrastructure - like here. Opposite is the factory building of the rocket manufacturer "Artem", which was also hit by a rocket. The roof is smashed, the windows have burst out. The house is right on a lively market at the Lukyaniwska metro station. Russia has admitted the airstrike.

Sandbags are piled up at stations and public buildings across the city for protection. Tanja says it won't help: "Many have left the country. We are maybe 20 million, they are 140 million and will simply flatten us." The danger is also present in Kyiv - where air raid alarms remind almost every day that rockets can hit. Many capitals ignore the alarm. However, where possible, the scarce petrol is hoarded in order to flee by car if necessary. Several trains with returning refugees arrive at Kyiv's main station every day. Some say they want to check in, get things done, and then head abroad again until life is safe here again. But many come to stay - even if Mayor Vitali Klitschko advises staying where there is no danger.

Some shops and the fast-food restaurants of the US chain McDonald's are still closed. But the streets, buses and trains are getting fuller and busier. While the fighting, especially in eastern Ukraine, continues to rage on, people in Kyiv are once again cramming into the metro cars to get to and from work. The subway continues to serve as a bunker, but little reminds you that the country has been in a state of war for almost 100 days.

Elderly Olga arrived at the main train station from Chernivtsi in western Ukraine after more than two and a half months on the run. "I want my old life back," she says. After the Russian troops marched in, she left her Obolon district when a tank crushed a car there. "I even switched from Russian to Ukrainian for three weeks." Now she's back to her mother tongue. "Nobody here has to protect our Russian language, we speak it and we won't let it be banned," she says, noting that Kremlin boss Vladimir Putin justified his attack not least by saying that he wants the Russian language, which has been pushed back by the Ukrainian government protection. "Those in the Kremlin should just leave us alone. We want to go our way towards Europe. In Russia there is nothing but hatred," says Olga.

The swear word "Putin chuilo" - in German roughly: "Putin is a dick face" - can be read in many places in Kyiv. The hatred is directed against the Kremlin boss, but also against Russia as a whole. Nowhere in the capital is this clearer than on the Maidan, where the heart of Ukrainian independence beats. There they still stand defiantly, the tank barriers on Independence Square, where the pro-European revolution in 2014 paved the way. A memorial commemorates the dead heroes of the "Heavenly Hundreds" who overthrew the pro-Russian head of state Viktor Yanukovych. Small, blue and yellow flags with the names of those who died in the Russian war of aggression are stuck in the lawn.

But a few meters further, on the Khreshchatyk boulevard, on this spring-like May day, much is the same as it was before the war - people eat, drink, laugh on terraces in cafes and restaurants. Only in the evenings does peace suddenly return when the curfew calls - and nobody is supposed to stay outside because of the danger of new Russian rocket attacks. 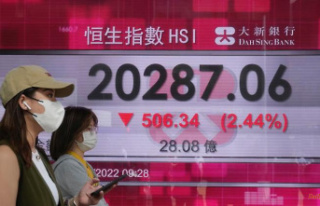