In the Bavarian Alps, the economically strong democracies are sending a strong signal against Russia's President Putin. 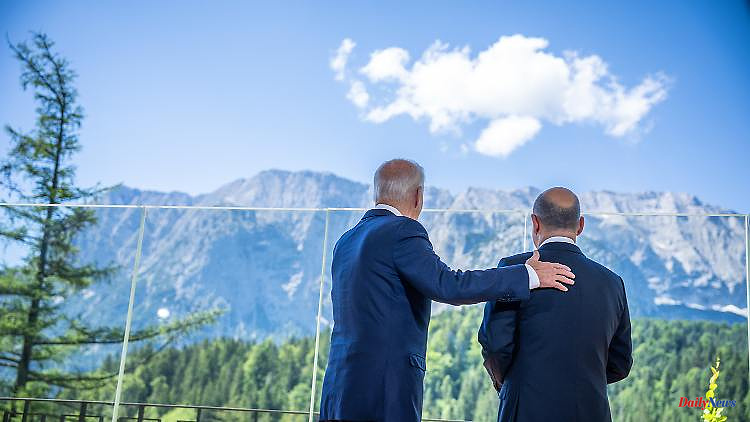 In the Bavarian Alps, the economically strong democracies are sending a strong signal against Russia's President Putin. While the participants agreed in advance on an import ban for Russian gold, a clear message followed from Chancellor Scholz and US President Biden.

Chancellor Olaf Scholz and US President Joe Biden have sworn that the West will remain united in view of the Russian war of aggression against Ukraine. The good news is that we have managed to stay united, Scholz said in a conversation with Biden shortly before the start of the G7 round of economically strong democracies in Elmau, Bavaria. Russian President Vladimir Putin obviously did not expect this.

The US President emphasized that Germany is one of the United States' closest allies. He demanded: "We have to stay together." Biden thanked Scholz for the important role he played as chancellor in creating unity. Biden said Putin expected the G7 and NATO to be divided. That has not happened and will not happen. The Chancellor later tweeted: "We are united, we stand together. That is our clear message to President Putin. It is good that you are here at the G7 summit, POTUS Joe Biden."

The summit of the seven leading democratic industrialized countries at Schloss Elmau officially began on Sunday afternoon and lasts until Tuesday. In addition to Germany and the USA, the G7 also includes Canada, Great Britain, France, Italy and Japan. Biden is in Germany for the first time since taking office in January 2021. After the G7 meeting, Scholz and Biden, among others, want to travel on to the NATO summit in Madrid. Food crisis and high energy prices also topics of the G7 At their summit, the G7 states are likely to promise Ukraine support again for as long as it is necessary. Concrete financial commitments are expected in the fight against famine, which is particularly prevalent in East Africa and is becoming even worse given the rising grain prices in the course of the war. The high energy prices will also be an issue in Elmau, as will climate protection.

According to Biden, the G7 want to announce an import ban on Russian gold and thus tighten sanctions against Moscow. The US President said on Twitter that Russia would lose tens of billions of dollars from this important export commodity. A senior US official told journalists the G7 would officially announce the import ban on Tuesday, the final day of the summit. "This will further isolate Russia from the global economy." Gold is Russia's second most important export after energy. The G7 countries have already imposed tough sanctions on Moscow. Further steps are to be expected "which should continuously increase the pressure on Putin and Russia," announced the US government representative. "I think the G7's collective efforts in terms of sanctions, export controls and other measures against Russia are having a dramatic effect on the Russian economy." The Russian economy is expected to shrink significantly this year.

Shortly before the start of the G7 summit, the Ukrainian capital Kyiv was attacked by Russia with rockets for the first time in three weeks. There were several explosions in the city of millions early Sunday morning. A rocket hit a nine-story apartment building, Anton Herashchenko, an adviser to Ukraine's interior minister, wrote in the Telegram news service. According to Mayor Vitali Klitschko, at least four people were injured.

Ukrainian President Volodymyr Zelenskyy has again called for more military aid. He is to be connected to the summit on Monday via video. In his evening video address on Saturday, Zelenskyy said his country was in a difficult moral and emotional phase of the war. Within half a day, Ukraine was hit by 45 Russian missiles. That is a clear signal so shortly before the G7 and NATO summits. He again called for more weapons and air defense systems for Ukraine.

The G7 affiliate program will now be a women-only program - but without the First Lady of the USA. The Federal Press Office announced that Jill Biden was not there. Since EU Commission President Ursula von der Leyen's husband is also missing, it will be a purely women's round with only four participants: Brigitte Macron, the wife of French President Emmanuel Macron, Boris Johnson's wife Carrie, Amélie Derbaudrenghien, the wife of EU Council President Charles Michel - and hostess Britta Ernst, Scholz's wife.

Critics of the G7 meeting wanted to take their protest to Garmisch-Partenkirchen, which is close to the summit in the Schlosshotel Elmau. After the G7 demonstration in Munich on Saturday, four participants were still being held on Sunday morning. The investigators accuse the four activists of assaulting police officers with dangerous bodily harm. 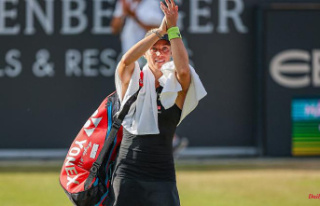 With big goals to London: In the end, Kerber doesn't...