Chancellor on a trip to the Balkans: Scholz calls on Serbia to sanction Russia 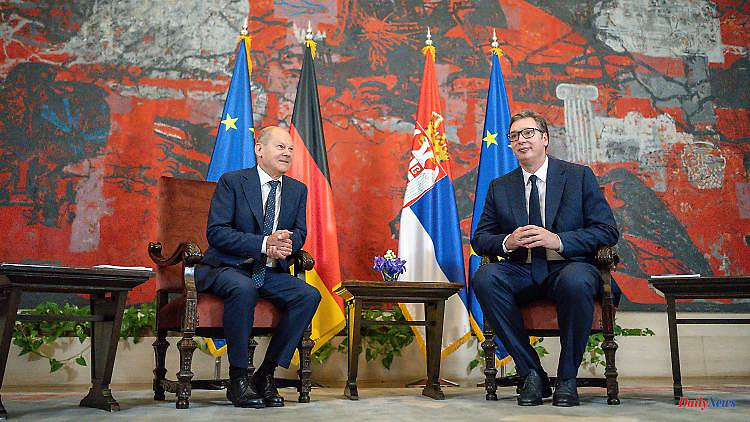 Serbia condemns Russia's war of aggression against Ukraine. But the country does not want to participate in the sanctions against Moscow. On his trip to the Balkans, Chancellor Scholz suggested that the EU accession candidate correct his course on Russia. He finds words of praise for neighboring Kosovo.

Chancellor Olaf Scholz has urged the EU accession candidate Serbia to follow the European Union's sanctions against Russia. "We expect that the sanctions will also be implemented by those countries that are moving in the EU accession process," he said in Belgrade after talks with Serbian President Aleksandar Vucic.

At the joint press conference, he confirmed that Scholz "clearly requested that Serbia join the EU sanctions" in a bilateral conversation. Belgrade has condemned the Russian attack on Ukraine in the UN General Assembly and in other bodies. However, his country takes a different stance on the sanctions, he continued. So it has to take into account that it is in a "very complicated situation" with regard to the energy supply.

Serbia has been negotiating to join the EU since 2014. At the same time, it maintains close ties with Russia and China. The Balkan country does not want to accept the EU sanctions against Russia at the moment because it sees its economic interests at risk. Among others, the country gets almost all of its gas from Russia.

Scholz had previously called for reconciliation between Kosovo and Serbia. It is important that the EU-led dialogue between the two neighboring countries progress, said the SPD politician at the start of his trip to the Balkans in Kosovo. After a meeting with Prime Minister Albin Kurti in Pristina, he praised the country's clear stance on the Ukraine war. "By supporting all measures and sanctions, the government there has shown that Kosovo, as a reliable partner, is close to us and to the side of the European and international community," said Scholz.

On the other hand, he addressed warning words to the Serbian government, which maintains its close ties to Russia. Scholz said that ultimately every country that wants to become a member of the EU, like Serbia, must be clear that it has to adopt all the regulations of the community, including the sanctions regime. "In times like these, the value of peace and security is once again made clear to us," said the Chancellor, referring to Russia's war of aggression against Ukraine. Kosovo and Serbia would have to "find a political solution with a comprehensive, sustainable agreement that also contributes to regional stability".

The conflict between Serbia and Kosovo has not been resolved for years and is hampering the prospects of both Balkan countries joining the EU. The government in Belgrade does not recognize the former southern Serbian province of Kosovo as an independent state. "Serbia is blocking the solutions that we offer," Kurti said, referring to mediation efforts. He referred, for example, to the dispute over the energy supply of communities in northern Kosovo.

Kurti announced that his government would submit an application to Brussels later this year to obtain EU candidate status. "Europe is our destiny. Europe is our future," said the Kosovar head of government. For years now, Kosovo has only had the status of a "potential" candidate for EU membership. In addition to Serbia, five EU governments have not yet recognized Kosovo's independence because they do not want to support secessionist movements: Greece, Romania, Slovakia, Spain and Cyprus. This blocks the way towards the EU, because the 27 member states have to decide unanimously on candidate status.

Further stops on his trip are Greece in the evening and Bulgaria and North Macedonia on Saturday. Central themes are the EU perspectives of the Western Balkan states and Russia's attempts to expand its influence in the region of former Yugoslavia.

In Pristina, Scholz said that deepening regional cooperation in the western Balkans is "particularly important to him". He referred to the "Berlin process" that deals with this and announced that he would invite people to a conference in Berlin in the fall. Scholz said that he wanted to enable the partners to work together as part of this process.

With regard to the EU accession process for the western Balkan states, the Chancellor admitted that the hopes of the EU member states had also been dashed. "That's why it's very important to give a new sign of hope and confidence," said Scholz. The EU must show that this accession process is wanted and advance it "with new speed and with new vigour".

1 "Wandering table" and other trends: multifunctional... 2 All in white: This is Britney Spears in her wedding... 3 True zoom camera on board: The Xperia X1 IV is a strong... 4 Bavaria: Nuremberg gives Fischer to Wolfsburg and... 5 Bavaria: Ukrainian patients: Minister thanks employees 6 Stones fell on the mountain: KSK soldier buried in... 7 Russian circle is founded: How Putin prepares the... 8 Still without a win in the Nations League: national... 9 Soccer. Liverpool targets Mercato: Saidou Sow 10 Hobbies. 500 boats leave Geneva for Bol d'Or 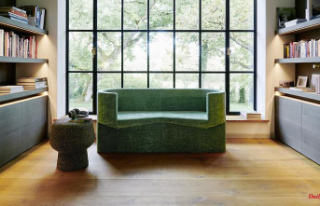 "Wandering table" and other trends: multifunctional...