The DFB party in a quick check: It's a little easier to be Timo Werner now

The German national soccer team delivers a vehemently talked about goal festival at the end of a complicated week. 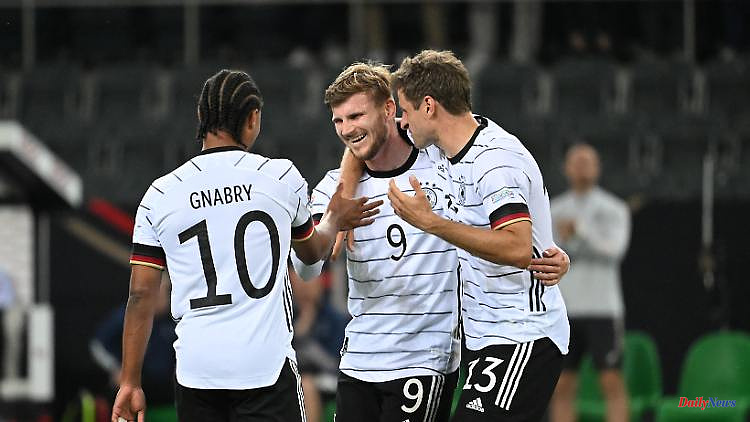 The German national soccer team delivers a vehemently talked about goal festival at the end of a complicated week. The DFB team Italy, which is struggling to be taken for granted, beats unexpectedly high. And for Timo Werner everything will be a little bit easier.

Rarely has the national football team longed for a win in a comparatively insignificant game - with all due respect for the Nations League - as vehemently as before this 991st international match in the association's long history. National coach Hansi Flick declared the game against the newly formed European champions Italy, who missed out on qualifying for the World Cup in Qatar at the end of the year, to be "very important". "I know from experience with the national team, but also with Bayern Munich, that victories are important for self-confidence, for self-image within the team, that you can win games, that you have the quality. We're working on that." Flick had already said before the last game in Hungary that it really went haywire: The 1-1 draw, the fourth in a row, was a "step backwards". Manuel Neuer, the untouchable goalkeeper because he was outstanding in all three Nations League games in June, had announced that they wanted to "ignite a rocket" again.

And they fired the rocket, with announcement. The 5: 2 (2: 0) over Italy is a liberation, albeit of limited sporting value. Twelve players had been handed their international debuts by Italy coach Roberto Mancini in recent games, in search of fresh influence to rebuild after a botched World Cup qualifier. What had gone well in the first leg now went wrong: The Italians became opponents for the DFB-Elf, who were also looking for themselves and their own self-evidence.

"We simply built up without conviction, we were too sluggish in building up the game. We made it relatively easy for the opponent to be compact," said Flick after the Hungary game. His team only created a handful of chances in Budapest against committed but rather conservative opponents. Against the Italians, who have long had nothing to do with the inspiring European champions of 2021, the German offensive organized a large number of top-class opportunities - and consequently a lot of goals. Again and again there were quick vertical actions in the first half, but all too often they ended in imprecise shots.

"It's always important to go on holiday with a win. The team did a sensational job," said a happy Hansi Flick. "I have to pay the team a huge compliment. Respect to pull off such a performance again in the fourth game." The German team, which had been searching for the national "mia san mia" with growing doubts for weeks, made it clear at all times that they wanted to use the last opportunity for a joint sense of achievement before a long international break. Thomas Müller, scorer to make it 3-0, rightly said: "We didn't get the chance for free, we worked it out with good pressing."

Manuel Neuer was slightly frustrated: The two goals conceded annoyed the national goalkeeper, who was again very strong, despite the clear lead. "Goals are always annoying, but let's not talk about it," said the captain after his 113th international match, but without a doubt he will not let those in front of him get away with it. In Italy's pressure phase after the restart - which ultimately only lasted a few minutes - a touch of chaos wafted through the German defensive association. However, Thomas Müller quickly made sure with his 3-0 lead that the little Italian breeze quickly became calm again.

Offensively, the many, many top-class opportunities made a flaw possible that would have been unthinkable against Hungary: while in Budapest you almost didn't shoot at the opponent's goal, the German team produced so many shots on goal against an overwhelmed opponent in the disguise of the European champions that the result should have been significantly higher. The fact that the audience in Mönchengladbach was ultimately able to celebrate "only" five German goals was largely due to the clear quality of numerous deals by Leroy Sané, Timo Werner and Co. Or as Thomas Müller analyzed it: "We have good players, a good attitude towards them Thing, a good project going on, but we still have a few deficits, to speak of: nobody can beat us."

Timo Werner has always been committed to the national team, has been without luck and goalless for months, Leroy Sané has not even been involved in the past few days. Sané, the highly talented offensive player, was counted comparatively hard after the Hungary game: "You mustn't overinterpret your body language, that's his way," said DFB director Oliver Bierhoff: "But it's important, he knows that that despite this body language he has to perform."

Sané was not even used in Budapest. He came over five minutes later than all the other professionals to warm up before the game, only towards the end of the game was he allowed to stretch a bit, but he didn't seem particularly committed either. "Hansi is very communicative, is very constructive, always tries to win the players over," said Bierhoff about the internal handling of Sané: "But at some point you have to say, that's it now - and then a player has to do something make of it." You can hardly formulate tougher announcements in the feel-good cosmos of the DFB without violating diplomatic protocol.

And what did Flick do now? The national coach, the tireless speaker, sent his two problem children onto the pitch against Italy from the start. It was an opportunity and a challenge: the chance to regain lost ground and the challenge to finally deliver again under pressure.

Sané at least presented himself with commitment, initially created exciting moments of change and had several top-class chances himself. What is all too often overlooked by Sané's many critics: the Munich player worked hard against the ball several times and put lasting stress on the freshly mixed-up Italians. However, small mistakes and wrong decisions clearly showed that the matter of course has long since distanced itself from the game of the tempo player. Even if it was always clear that he didn't want to betray the confidence of the national coach. The longer the game went on, the more inaccurate his game became. It's a long way from the problem child to the beacon of hope for the FC Bayern professional. The belief that Sané will once again become a difference player for the DFB has expired for the time being.

And Werner? It was complicated for a long time. Very complicated. His second touch of the ball was a bad one, when the attacker deprived himself of a promising position for a shot on goal in the first few seconds of the game. In the middle of the first half, he missed his first international goal of the year in front of Italy's goalkeeper Gianluigi Donnarumma. "Unlucky" is the benevolent predicate that one all too often bestows on the attacker, who is never suspected of not tackling his tasks with full commitment. But always being unlucky is no longer unlucky at some point. For only the second time Germany have scored more than one goal in a competitive game against Italy, and for a long, long time it looked like Timo Werner could not contribute to the scoring.

But then he was served so forcefully by Serge Gnabry, another one who can do more than he can bring to the pitch at the moment, that he steered the ball over the line with a sliding tackle. It was a doubly remarkable moment: Werner just found his way back to where it was getting dangerous and then just redeemed himself. "It's true that he has a lot of effort and tries to put the opponent under pressure," Flick said about his number 9 after Hungary and repeatedly praised Werner's special running paths. "That he always offers himself. But we just don't have enough chances to score."

Against often overwhelmed Italians, there were many. Many many. And then a lot of goals. Nothing broke out of Werner, he took the goal very calmly. A few minutes later, the "Werner reconstruction program", as it was called on ZDF, took effect again. It was easy, in conjunction with Thomas Müller, Werner had annoyed Italy's Donnarumma to make a mistake and finally completed it. Flick thought that was "very important" for his striker. Werner himself even announced afterwards that the goals were "double and triple important" for him in his situation "when you are counted after every game". And of course he is "just not who he used to be when I accepted and welded every ball. But I'm working on getting back there."

Hansi Flick (national coach): "I have to pay a huge compliment to the team. Respect to be able to pull off such a performance again in the fourth game. Everything we set out to do, they did brilliantly. It was a real stress test for all of us "You saw what was possible after the first goal. We didn't do everything perfectly, but we don't want to talk about that today. It's always important to go on holiday with a win. The team did a sensational job. We We're looking forward to the road to the World Cup. We still have two important games in September, where we'll be challenged again. We'll see what we have to do to adjust the screws."

Manuel Neuer: "We believed in ourselves and went out on the pitch with confidence. It worked from the start. We went into the game with confidence. Goals are always annoying, but let's not talk about it. Victory has one good expressiveness. Nations like England, Hungary and Italy are always to be taken seriously. That was an important milestone."

Thomas Müller: "We showed more courage, accepted the risk of losing the ball. More factual courage than emotional one. We didn't get the chance for free, we worked it out with good pressing. We have good players, a good attitude towards them We have a good project going, but we still have a few shortcomings, so to speak: nobody can beat us."

Ilkay Gündogan: "We played really good football at times, well-developed attacks. We deservedly won the game. The two goals we conceded were a bit unnecessary. Nevertheless, the performance was really good. The division of space was really good, everyone wanted to have the ball "If we do what we did today, many teams will find it difficult against us. If we finish so mercilessly up front then we're on the right track. It's a very attractive group. If you're not ready that day you'll be punished , today it was the Italians. After today we really deserved the summer break."

Roberto Mancini (Italy coach): "It's not fun to lose 5-2. That can happen when everything is going badly and we defended badly. We created too many spaces and then got the 3-0 straight away. Yes, there are positive things even if you don't believe it." 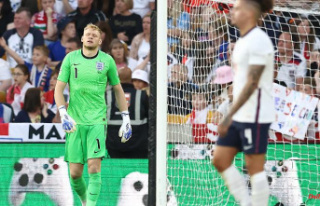