The night of the war at a glance: Selenskyj: Will reconquer the south - Russia gains ground

For the first time since the beginning of the war, Ukrainian President Volodymyr Zelenskyj is visiting the front in the south of the country. 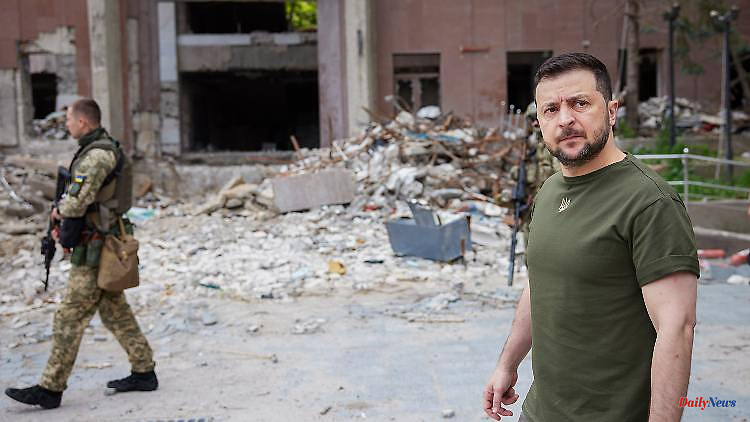 For the first time since the beginning of the war, Ukrainian President Volodymyr Zelenskyj is visiting the front in the south of the country. On his return journey he makes a promise to the Ukrainian people. In the east, Russia is meanwhile conquering a town near the strategically important city of Sievjerodonetsk. However, according to the Ukrainian governor of the region, the Russian troops should send all their reserves into battle for the conquests. The civilians hiding in a chemical plant in the region are reportedly not evacuating.

Zelenskyj: Will retake the south

Ukrainian President Volodymyr Zelenskyy has promised the people in the south of the country that they will not be left in the lurch. After his visit to the southern front, he said in a video speech early in the morning: "We will not leave the south to anyone. We will take back everything that belongs to us." Ukraine will also restore safe access to the sea, he assured. The Ukrainians have more will to live than Russia has missiles.

After a series of international meetings in Kyiv, Zelenskyy visited the southern front on Saturday for the first time since the beginning of the war. He was first in Mykolaiv, later in Odessa. In the first days of the war, Russia had conquered the entire Ukrainian coast on the Sea of ​​Azov and parts of the Ukrainian Black Sea coast in the Cherson region.

In the fierce battle for the eastern Ukrainian city of Sieverodonetsk, Russian troops have gained territory and entered a suburb. "By shelling and storming, the enemy achieved partial success in the village of Metyolkine and tried to establish themselves there," the Ukrainian General Staff said in its situation report on Saturday evening. The village is south-east of Sievjerodonetsk.

Officers and soldiers of the Ukrainian Ajdar battalion voluntarily surrendered themselves in Metyolkine, reports the Russian agency TASS, citing the pro-Russian separatists of the Luhansk People's Republic. This information could not be independently verified.

Russian troops are still not in control of the largely devastated Sieverodonetsk. According to Ukrainian information, the fighting for the strategically important city in the Donbass is increasingly taking place in the surrounding villages. The situation is more precarious for Ukrainian civilians who have sought refuge at the local Azot chemical plant.

Civilians don't want to be evacuated

According to the governor of the Luhansk region, Serhiy Hajday, 568 civilians sought shelter in the Azot plant, including 38 children. According to him, they do not want to be evacuated. "There is constant contact with them. They have been offered evacuation several times, but they don't want to."

According to the governor, the chemical plant cannot be compared with the Azovstal industry in the port city of Mariupol. "This is not an underground city. These are individual shelters that are separate, not interconnected." In a bunker system under the Azovstal steel works, Ukrainian defenders and civilians held out for weeks long after Mariupol had been captured by Russian troops.

For last Wednesday, the Russian side had announced a humanitarian corridor through which civilians should be able to flee from the chemical plant to Russian-controlled territory. However, the Ukrainians mistrusted the Russian promises.

"Russia is throwing all its reserves into battle"

Regarding the military situation in Donbass, Governor Hayday said that Russia was throwing all its reserves into battle to capture Sieverodonetsk and the city of Bakhmut. According to the Ukrainian General Staff, Russian troops recently shelled the administrative center of the Luhansk region with heavy artillery. However, an attempted storming of the Ukrainian positions in the city's industrial area failed. Russian storming attempts were also unsuccessful in Syrotyne, a village west of Metjolkine.

Russian troops also used artillery against a number of towns in the Kharkiv region. In the direction of Sloviansk, the enemy is trying to create favorable conditions for an offensive by using heavy weapons, according to the situation report. At the same time, the Ukrainian military leadership emphasized that Russian attempts to carry out forcible reconnaissance in the Krasnopillya region resulted in heavy casualties for the attackers. The Russian advance on the Slovjansk-Kramatorsk area, where the headquarters of the Ukrainian armed forces in the Donbass is located, continues to falter.

Russian troops destroyed oil tanks near the central Ukrainian city of Dnipro with a rocket attack on Saturday. The regional administration reports that three rockets hit the depot in the Novomoskovsk district. "There is a strong fire," said the governor of the Dnipropetrovsk region, Valentyn Resnichenko. Eleven people were injured. Russian missiles hit a factory that processes gas near the city of Izyum. There was a big fire there too.

NATO Secretary General Jens Stoltenberg expects the war in Ukraine to last for years. "We have to prepare for the fact that it could take years," he told the "Bild am Sonntag". Therefore, one should not let up in supporting Ukraine against Russia. The cost of doing so is high because military aid is expensive and energy and food prices are rising. But that is no comparison to the price that Ukraine pays every day with many lives, said Stoltenberg. If the Russian President Vladimir Putin is not resolutely opposed, "then we will pay a much higher price."

The NATO chief expects Ukraine to be able to drive Russian troops back out of Donbass with the help of further arms deliveries from the West. "Ukrainians are bravely defending themselves against the Russian invaders," he said. The western defense alliance will not intervene in the fighting itself. As a clear signal to Moscow, they have strengthened their own defense with 40,000 soldiers under NATO command.

1 How much power does Mélenchon get?: Macron has to... 2 If necessary, without a debt brake: Lang: "No... 3 The day of the war at a glance: Navalny exposes Gazprom... 4 Second disaster in a month: Iranian fighter jet crashed... 5 Successes for Höcke and Chrupalla: The AfD wants... 6 After indigenous protests: Ecuador's government... 7 The lost candidate: the Georgians want to join the... 8 Briefing and award: Zelenskyj visits frontline region... 9 After deportation flights were stopped: London clamors... 10 Party of Ostpolitik: "A large part of the SPD... 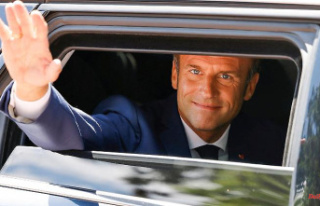 How much power does Mélenchon get?: Macron has to...