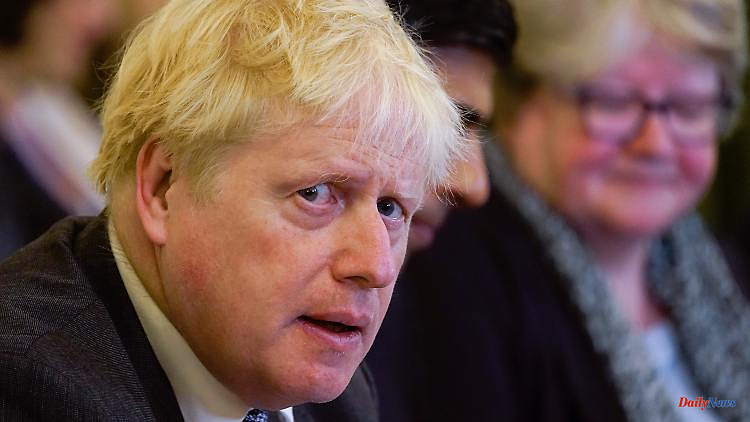 British Prime Minister Johnson's political career could have ended two weeks ago. But he narrowly survives the vote of no confidence by the Tory MPs in the House of Commons and distracts with the next crises.

It's an amazing talent that Boris Johnson has. Barely two weeks ago, the British Prime Minister's political career was almost over. He narrowly survived the Conservative Tory MPs' vote of no confidence in the House of Commons, with 41 percent of members of his own group voting against him. In polls, a large part of the population is calling for his resignation, and he was publicly booed at the Queen's Jubilee celebrations. And yet, Johnson just keeps going. Instead of talking about "Partygate" and its misconduct during the corona lockdowns, the focus is always on new crises.

"The British call it the 'dead cat' strategy," explains Nicolai von Ondarza from the Science and Politics Foundation in an interview with ntv.de. "When there's a dead cat on the table, everyone talks about it and not about the scandal that dominated before," says the UK expert. And it works, after all there are at least two dead cats on the table this time. "Both the renewed escalation with the EU on the Northern Ireland issue and the deportations to Rwanda are a strategy to distract from 'Partygate'," says von Ondarza.

Just a week after the vote of no confidence, Johnson and his government are conjuring up another crisis. Last Monday, they introduced a bill in the House of Commons that would unilaterally circumvent the Northern Ireland Protocol of the Brexit Agreement - and would thus probably break international law. A conflict that has been brewing for a long time. It is no surprise to political scientist Anthony Glees that he is boiling up again now of all times. "It is Boris Johnson who is fighting for his political survival," said the emeritus professor at Buckingham University in an interview with ntv.de.

It was the British Prime Minister himself who signed the Brexit Agreement, including the Northern Ireland Protocol. Johnson hailed the 2019 arrangement as a major breakthrough, replacing the backstop proposed by his predecessor Theresa May. The backstop would have envisaged Britain remaining within the single market and customs union to prevent a customs border between Northern Ireland and the Republic of Ireland. With the protocol, the kingdom could secede. The customs border is now by sea between mainland Britain and Northern Ireland.

"Back then, it was said that Northern Ireland would remain in the EU single market and would thus get the best of EU membership and remain part of the UK," explains Glees. That paid off for the British province. "People are better off economically because they can sell their goods within the EU and also get workers from across the EU. We can't do that in the rest of the UK." Therefore, from an economic point of view, it makes little sense to question this agreement, says the political scientist.

So there is a political will behind it. The British government claims it is concerned about the Good Friday Agreement, which will ensure peace in Northern Ireland. In doing so, she follows the arguments of the Northern Irish unionist DUP, which opposes unification with the Republic of Ireland. For weeks she has been blocking the formation of a government in Belfast and is demanding that Northern Ireland give up its special Brexit status.

The EU has responded to Johnson's draft law with infringement proceedings. Political scientists from Ondarza expect two more steps, but not the full escalation. Because the draft of the Northern Ireland Protocol has to go through both houses of Parliament. "The British government does not have its own majority in the House of Lords, and many conservative lords are particularly critical of the breach of international law," says the Britain expert.

The EU knows that too. "It is unlikely that the bill will get through the UK Parliament before the end of this year," said von Ondarza. In addition, it is unclear whether Johnson will even survive this year politically. That's why Brussels is reacting with "strategic patience", as von Ondarza calls it, and as a third step will try to signal to Northern Ireland that it can be talked to - unlike the narrative that London often tries to use.

Meanwhile, London has been harboring a second conflict with Europe for some time. Not with Brussels this time, but with Strasbourg. On Wednesday the European Court of Human Rights (ECHR) - which has nothing to do with the EU but is an organ of the Council of Europe - stopped the first planned deportation flight to Rwanda. The British government had struck a £120m deal with the African country. The agreement stipulates that people who are deported by Great Britain end up in Rwanda and receive accommodation and an asylum procedure there. The purpose of this deterrent is to prevent smugglers from continuing to steer people across the English Channel in unseaworthy boats.

Because of the dispute with Strasbourg, some Tory MPs have already threatened to withdraw from the European Convention on Human Rights, which Great Britain helped establish in the 1950s. But that's not particularly likely. "I think it's more like shadow boxing," says von Ondarza. "I don't think that's something the British government is seriously aiming for." After all, that would jeopardize not only the Brexit deal but also the Good Friday Agreement in Northern Ireland, as the government has to ensure the British province is a member there.

In any case, the Rwanda agreement is controversial. Following the ECtHR decision, British courts are now to clarify whether the practice is lawful. But criticism of it now ranges from human rights activists to the British royal family. "It's really hideous," says Glees. The British government has criminalized the search for asylum. "In the end, Rwanda decides what happens to the people," says Glees.

The expert sees a policy behind it that is typical of Johnson. The Rwanda deportations and the renewed Northern Ireland question are a radicalization of British politics. Johnson is trying to stay in power with new crises. "Anything that divides people and divides their opinions is important to him," says Glees. Rwanda's deportations met with approval from around 35 percent of voters. “If you take a closer look, the people who voted for Brexit and the people who voted for the Tories in 2019 are in that 35 percent,” says Glees.

Johnson's party, on the other hand, is less critical. "Rwanda's policy is supported by most of the conservative party, including some who just supported the no-confidence vote against Johnson," says von Ondarza. It also helps that the Labor Party is struggling to find its own position on the Rwanda deportations and the Northern Ireland issue. Because an important part of their electorate advocates tougher rules against illegal migration. In addition, it is difficult for the former "Remain" party, which no longer wants to question Brexit, to position itself on the Northern Ireland issue.

That leaves only the Conservative Party over which Johnson could fall. "But there is currently no clear successor," says von Ondarza. "And for many, Johnson is the one who pushed through Brexit. That's a great achievement, especially for conservative voters." You can win elections with him. But now the constant scandals cost approval. "Because of his misconduct and lack of credibility, he is much more controversial in the party and also at the grassroots level. However, around 60 percent of MPs and conservative voters still support him," says von Ondarza.

So Johnson's failure is only a matter of time? If political scientist Glees has his way, it could be ready in the next few weeks. Then there are by-elections in two regions, and bankruptcies are looming for the conservatives there. Political scientist von Ondarza is a little more reserved. "In my estimation, Johnson is very likely to survive the by-election." In October there is then the big party conference of the conservative party. "By then, however, there must be a significant change in mood within our own faction," says von Ondarza.

In addition, the next scandals are already emerging. A few days ago, the British government's "ethics adviser" Christopher Geidt, whose resignation has since been published by Downing Street, resigned. Added to this is the cost of living, which is rising sharply in Great Britain in particular. And a committee of inquiry is in the process of clarifying whether the British prime minister lied to parliament during "Partygate." "I think if Johnson falls over anything, it's the combination of those events, but not just one," said von Ondarza.

1 Two dead in Kabul: IS claims to have attacked Sikh... 2 'Time is of the essence': Johnson: Must... 3 Ukraine needs help for a long time: Stoltenberg: war... 4 The night of the war at a glance: Selenskyj: Will... 5 How much power does Mélenchon get?: Macron has to... 6 If necessary, without a debt brake: Lang: "No... 7 The day of the war at a glance: Navalny exposes Gazprom... 8 Second disaster in a month: Iranian fighter jet crashed... 9 Successes for Höcke and Chrupalla: The AfD wants... 10 After indigenous protests: Ecuador's government... 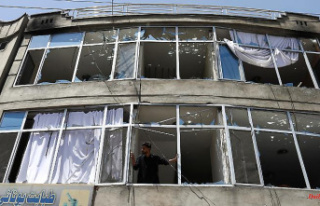 Two dead in Kabul: IS claims to have attacked Sikh...