At its federal party conference in Riesa, the AfD agreed to maintain the dual leadership for the time being: Tino Chrupalla remains federal spokesman. 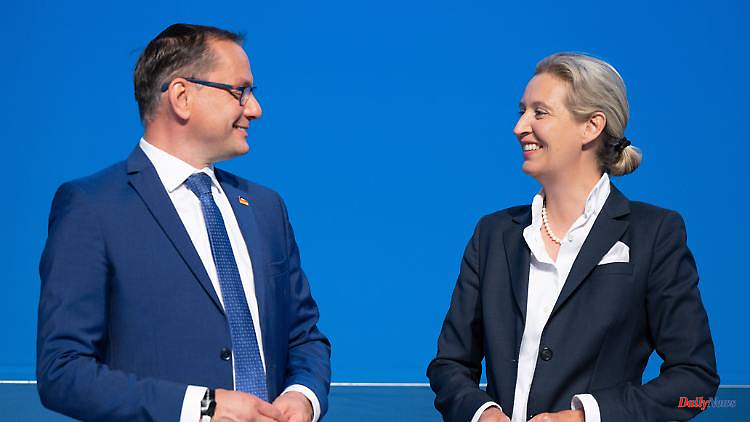 At its federal party conference in Riesa, the AfD agreed to maintain the dual leadership for the time being: Tino Chrupalla remains federal spokesman. Alice Weidel succeeds Jörg Meuthen, who has left the AfD, as the new co-spokeswoman.

Tino Chrupalla stays and Alice Weidel follows Jörg Meuthen: At its party conference in Riesa, Saxony, the AfD confirmed the previous federal spokesman in office. Norbert Kleinwächter from Brandenburg, who had challenged Chrupalla, failed with his opposing candidacy. Chrupalla received 53.5 percent of the votes, Kleinwächter came to 36.3 percent. 10.2 percent of the delegates abstained. As co-speaker alongside Chrupalla, Alice Weidel prevailed against MEP Nicolaus Fest. Weidel received 67.3 percent of the votes cast, Fest 20.6 percent.

With 72.4 percent of the votes, the Thuringian far-right Stephan Brandner was elected 1st Deputy Chairman. Peter Boehringer, like Brandner a member of the Bundestag and a member of Chrupalla's "Team Future" list of proposals, prevailed against Erika Steinbach with more than 55 percent of the votes. The former CDU politician suffers from the AfD-affiliated Desiderius Erasmus Foundation. The Hessian Mariana Harder-Kühnel, also in "Team Future", received 74.6 percent of the votes unopposed. Nine more board positions are still up for grabs, but Chrupalla can already count on an overwhelming majority of supporters. The division of the federal board with a majority of the Meuthen camp would be history.

"We no longer have time for the fermenting bunch," said Kleinwächter, a member of the AfD parliamentary group board, alluding to a statement by honorary chairman Alexander Gauland. "We need professionalization, we need unity, we need discipline with full grass-roots democracy." The Brandenburger Kleinwächter received less applause than Chrupalla, but received approval in the hall. More than a third of the votes was a respectable result. Kleinwaechter ensured that Chrupalla was elected with the worst results of all five board chairs.

Chrupalla accused the Kleinwächters camp of having damaged the reputation of the party and faction leadership. "I'm the federal spokesman for the base," said Chrupalla, who has been the federal spokesman since November 2019. "If I'm attacked, it's only because the base is to be silenced." When asked what he wanted to do better in the future, Chrupalla remained vague. "We have to support each other," he said, referring to the work of the district associations. Even in his statement of accounts and his application speech, the reasons for the decline in support and membership of the AfD were hardly an issue.

Weidel received standing applause for her speech. "The AfD is not an obsolete model, the AfD is the party of the future. The AfD is the necessary corrective in the encrusted party landscape," said Weidel. Above all, she blamed the other parties for the AfD's problems: "It was very clear: the empire is fighting back. We will react to that," said Weidel and called for more unity. "I believe that we will first come into government in the eastern German states. That is also inevitable," said Weidel, referring to inflation, which will bring more voters to the AfD.

Fest had criticized a "constant hacking and rushing" within the party. "People don't vote for us if we present ourselves the way we are right now." In their questions to the candidate, however, delegates had expressed doubts that Fest could put an end to these internal disputes. As a representative of the national-liberal camp, Fest was clearly rebuffed. The election of Stephan Brandner also strengthened the picture that the camp of the dissolved wing can largely assert itself and Meuthen's supporters could hardly mobilize.

On Friday, the more than 500 delegates with the required two-thirds majority approved a motion to change the statutes of the Thuringian right winger Björn Höcke. This cleared the way for a single leadership instead of a double leadership. "We'll do the two-man lead again in this run," said Höcke in justifying his application. The party should once again experience "neutral" leadership by the federal executive board, "in order to elect a one-person leader next time." A motion to elect a one-man leadership this time clearly failed on Saturday: 78 percent of the more than 500 delegates voted for a two-man leadership.

On Friday evening, Chrupalla asked critical questions during a discussion about the activity report of the outgoing national board. Among other things, it was about the question of why numerous members left the party and why the party cut off in the previous elections with sometimes significant losses. Chrupalla named the disputes in the previous national board as the main cause of the problems, but was optimistic that the conflicts would be history after Meuthen left the party.

1 Motion by the parliamentary group: Union calls for... 2 Up to 50 percent of equipment: Ukrainian general admits... 3 "A complex puzzle": BKA investigates Russian... 4 After shelling from Gaza Strip: Israel fires rocket... 5 "FryTheRice" for 2024: Trump's revenge... 6 Palermo's Cosa Nostra: The mafia is back in politics 7 Revelations about Putin buddies: Navalny team shows... 8 Explosion and shots in Kabul: Two injured after attack... 9 general a D. Lahl in an interview: "The tank... 10 Chancellor off duty: Merkel: "Now I'm free" 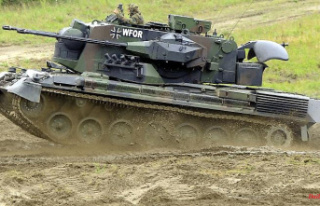 Motion by the parliamentary group: Union calls for...